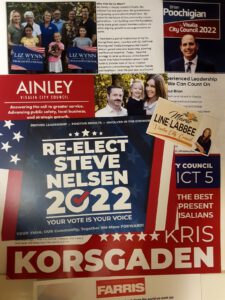 No one can tell who will be victorious on November 8, but public records can tell us who amassed the most cash during campaign season.

The Visalia City Council race has ten candidates running in four districts: the candidate who raised the most money was Vice Mayor Brian Poochigian, running against Heather Carter in District 3.

Poochigian has raised an impressive $61,644. Carter did not file a California FPPC Form 460 — a campaign donor statement — because she raised less than $2,000.

Coming in second is political neophyte Bob Ainley, running for an open seat in Visalia City Council District 4 against Marie Line-Labbee and Emmanuel Soto. Ainley has raised $50,776 to Line-Labbee’s $11,500 and Soto’s $5,000.

Along with donations from the general community, Poochigian and Ainley received substantial donations from Visalia’s establishment, developers, and farmers.

Coming in third is Mayor Steve Nelsen who is running against challenger Kris Korsgaden in District 5. Nelsen has raised approximately $35,000. Korsgaden did not file campaign donor statements.

Liz Wynn, running in District 1 against challengers David Farris and Justin Bolton, has raised $21,424. Farris has raised $4,500 and Bolton did not file campaign donor statements.

Candidates are required to file their last donor statements in December, so their final amounts may differ from the currently available numbers.

The purpose behind candidates filing a donor statement — or a Form 460 — is transparency. Form 460 details those who are financing each candidate’s campaign and help the voter decide who they want in office.

In Hanford, examining the 460s revealed that the Libertarian Party is funding almost 90% of three candidates’ campaigns, which could be seen as a positive or a negative by the voters.

Candidates running for City Council seats are required to file their paperwork with their City Clerk. Paperwork for candidates seeking election to other seats within Tulare County can be viewed at a website hosted by the Tulare County Elections Office. 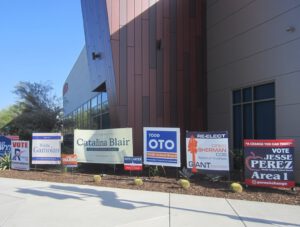 The race for multiple Visalia Unified School District board seats has heated up in Areas 1, 2, 4 and 6 between the incumbent board members and their challengers– as evidenced by the candidates’ signs across town.

Those signs don’t come for free.

The Visalia Unified Teachers Association has thrown approximately $16,000 in to the race, donating to Gamoian, Guerrero, Blair, Oto, and Villegas — and avoiding donations to Belt, Perez, Reynolds or Murphy, who have shown support for each other in their respective campaigns.

The Republican Party of Tulare County donated $500 to Belt, the only donation from a political party to the Visalia Unified candidates reported so far.

Candidates who are not going to fundraise, and do not intend to spend more than $2000, file a California FPPC Form 470.

California defines fundraising to include loans, self-funded campaigns, donations from family, and in-kind or donated services such as graphic design on campaign material.

Bolton appears to have spent little or nothing on his campaign, and Carter bought some yard signs and printed up a flyer for the Visalia Chamber of Commerce candidates’ forum.

Korsgaden, on the other hand, appears to have spent a significant amount of money buying yard signs, large campaign signs, and paid to send a “Every Door Direct Mail” half page campaign ad to all District 5 households.

There are approximately 7,800 households in District 5 who would have received Korsgaden’s mailer.

Wynn mailed a half page campaign ad targeted to people who have voted in 4 of the last 5 elections at a cost of $2000.

Line-Labbee researched mailers and received a VistaPrint quote of $1700 for a half-page that did not include postage.

Poochigian paid $8000 for the design, printing and postage of his mailer. Soto paid $3000 for two post cards to targeted voters in his district.

Jason Carns, a political consultant out of Fresno, said that a half-page campaign ad with postage and printing normally costs around $4,000 and he did not believe a mailer could be done for under $2000.

Even if Korsgaden designed, printed, and mailed his campaign ad for under $2000, he would have to account for his large campaign signs and yard signs. He did not respond to requests for comment.

She said she used Central Valley Business Forms — a little more expensive than Vistaprint, but a local business.

Does the happy family live in District 5? 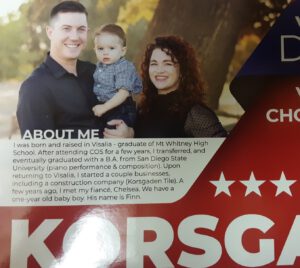 His wife and son are pictured with Korsgaden on his mailer as one happy family, but Korsgaden insists he does not live with them. Korsgaden said during a September interview that he lives in District 5 at his Acequia address while his wife and son live in his wife’s house that is outside of District 5.

The Valley Voice discovered that Korsgaden owns the building on Acequia where he is registered to vote but that it is the office for Korsgaden Tile, not a residence.

A representative from the Tulare County League of Women Voters hand-delivered an invitation to their October 5 candidates’ forum and she also came to the conclusion that the building was an office.

On observing Korsgaden’s home on Acequia over several weeks, and at different times of the day and night, the Valley Voice has determined that the building where Korsgaden says he lives on Acequia is uninhabited.

His assertion that he does not live with his family conflicts with a statement he made during a September 26 interview explaining his chaotic life.

Korsgaden did not respond to repeated requests for comment for this article.

Ironically, the person who raised the most money wasn’t convinced that the best fundraiser would necessarily win the election.

“Whoever knocks on the most doors has the best chance at winning,” said Poochigian.

Thusu raised an impressive amount of money and had name recognition, but Valero knocked on almost all the doors in his district and ended up winning even though he had raised very little cash.

Valero has changed tack for this election though, refusing to debate his challenger Scott Harness, and raising $112,000 in donations to Harness’s $56,000.

Carter said she made a conscious decision not to fundraise because this was her first time wading into politics. She wanted to wait and see how she adapted to politics before asking people to donate to her campaign.

Carter has lived in France and Chile and said that those countries have a much more equitable system that would be nice for the United States to adopt. Candidates are allowed the same amount to spend and the same amount of airtime to campaign.

“It puts everyone on the same footing,” said Carter.

One thought on “Campaign fundraising — who has raised the most, the least, and who’s not talking”