“I think I would do a great job,” Kris Korsgaden, a Visalia City Council District 5 candidate, said, “and that’s why I am running.”

Korgaden cites his experience in the building industry and progressive views concerning zoning ordinances, housing, and legalizing pot dispensaries in Visalia as reasons to vote for him.

Visalia Mayor Steve Nelsen – who currently holds the District 5 seat, and is running for re-election – is not convinced.

He believes Korsgaden is running against him as a reaction to the city’s handling of the outside dining parklets during the COVID shutdown. The ensuing fight between Korsgaden’s father, Keith Korsgaden – the owner of Crawdaddy’s — and Nelsen resulted in lawsuit threats.

Whether Korsgaden’s purely issues-driven or a motivated by a vendetta against Nelsen, it may all be for naught.

Doubts have surfaced if Korsgaden even lives in District 5: if he does not, that disqualifies him from holding the seat.

Korsgaden is a third-generation Visalian and received his BA in Performance Arts from San Diego State. He is married, a father to one son, and owns his own business, Korsgaden Tile.

Korsgaden did not participate in the League of Women Voter/Visalia Times Delta candidates’ forum Wednesday, October 5.

“As you can imagine with the politics of Visalia, I’m not super excited to talk about the issues,” Korsgaden told the Voice. “There is a lot to talk about after I win though!”

Korsgaden said it was it was important to him that voters know he is not affiliated with any certain party.

“The voters are not picking between two conservatives. Steve and I are not the same,” he said.

The most significant difference between Nelsen and Korsgaden is the legalization of pot dispensaries inside Visalia.

Korsgaden is in favor of legalizing pot dispensaries and does not want the city to put a cap on the number of licenses issued.

He thinks pot is a small issue though.

“It’s not the biggest issue facing Visalia compared to housing,” he said. “I’m really big on building housing. I’m a YIMBY [“Yes In My Backyard”], not a NIMBY [“Not In My Backyard”]!”

Korsgaden does not agree with many of the decisions the city council has made regarding zoning: he feels there are too many restrictions on people’s right to build what they want on their own property.

He says he was a big supporter of AB9, a bill that was passed in Sacramento allowing multiple units to be built on single family lots.

“I’m in the building trades and I think the future of Visalia is hanging in the balance of what kind of city it wants to be,” he said. “We have the capability to become a futuristic city.”

Solving homelessness “needs to be a private market solution” he said.

“The city is trying to make this a 100% government solution. I think the government wants to be the hero and doesn’t want anyone in the private sector to be the hero when it comes to solving problems,” he added.

Nelsen voted for the new low-barrier shelter, officially named the Tulare County Hope for the Homeless Emergency Shelter and Navigation Center. He said he felt it was a step in the right direction to help homeless residents receive a bed, medical services, and mental health services for 90 days. The facility also has a jobs center.

After the resident is on a solid foundation, Nelsen said, the client can move to transitional housing that the city is in the process of finishing.

Clients could then finally transfer to an apartment complex such as the former Majestic Hotel that the city has converted to low-income housing.

In terms of legalizing pot dispensaries – Nelsen said that it took nearly 50 years for the research to conclude that cigarettes were unhealthy. While he’s in favor of medical marijuana, he’s not sold on recreational use.

“We need more data available so we are not making a decision that 30 years from now will say pot is actually bad for you,” Nelsen said. “If I can protect the health of our citizens then I don’t care about the sales tax revenue.”

Another point of contention between the two candidates is how the city handled the shutdown during COVID.

Nelsen said that the Downtown Visalians group, which he leads as executive director, turned Main Street outdoor dining into a reality within 72 hours of the state mandated shutdown.

The city council modified ordinances and the Downtown Visalians provided restaurants with low cement barriers in which to make parklets. The only condition was that the restaurant owners had to sign a release form promising they would not touch the barriers.

Keith Korsgaden painted the barriers green to create a more welcoming dining environment at Crawdaddy’s for his clients in the 100 degree heat. Nelsen told him he had to repaint them white or the city would be there the next day to do it themselves. As a result Keith Korsgaden threatened to sue.

“It was none of Steve’s business,” said Kris Korsgaden. “Why is he sticking his nose in our business when he has so many other issues to contend with?”

In response, Kris Korsgaden started attacking Nelsen and the editor of the Visalia Times Delta, Eric Woomer, on social media.

Korsgaden made pejorative memes ridiculing Nelson, Woomer and had in the past made unflattering memes about former VUSD trustee Lucia Vasquez.

Korsgaden made a t-shirt out of one of his memes attacking Woomer that pictured Jim Carey being pushed out of a rhinoceros’ anus. 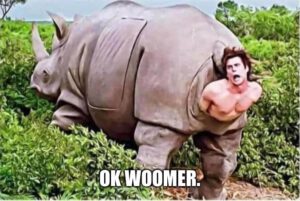 Does Korsgaden live in District 5?

Not living in the district would disqualify Korsgaden from holding that city council seat representing the district.

Korsgaden told the Valley Voice that in no uncertain terms he lives in the district, and swore under penalty of perjury on his candidate’s paperwork submitted to the Tulare County Registrar of Voters that his Acequia address was where he lived.

According to the Tulare County Registrar of Voters, a candidate has to physically live in the district to qualify to represent that district. The registrar’s definition of living in the district was the place where a person “lays their head down at night to sleep.”

The Valley Voice discovered that Korsgaden owns the building on Acequia where he is registered to vote but that it is his office – and that it is highly likely that it is uninhabited.

A representative from the Tulare County League of Women Voters hand-delivered an invitation to their October 5 candidates’ forum. Arriving at the Acequia address, she observed that the windows were blacked out and the front door was not an entry to the building. She went around the side to a sliding door where an employee of Korsgaden Tile, Keith, accepted the invitation.

In her opinion, the building was an office.

On observing Korsgaden’s home on Acequia over several weeks, and at different times of the day and night, the Valley Voice has determined that the building is uninhabited.

When confronted with the information that no one lives at the address on Acequia he listed on his candidate’s paperwork he said, “that’s where I live, technically.”

Korsgaden said that his wife owns a different house they are remodeling (outside of District 5) and she lives there with their son. He said that he does not live with his son and wife.

When asked what will happen when he ultimately moves in with his family outside of the district, Korsgaden replied that they might sell the home.

His statement about not living with his wife and son conflicted with an earlier statement he made explaining his chaotic life.

According to the registrar of voters, the Acequia home has been Korgaden’s voter’s registration address “for a long time.”

On reviewing Korsgaden’s voting history, his Mail in Ballot has not been returned to the Tulare County registrar’s office 14 times. He has voted in a few elections, but filled out a provisional ballot not in his precinct.

While the voting history does not reveal how a person votes, but indicates to what party the individual is registered and if they voted.

Korsgaden said he does not have a criminal record.

“I want to make it clear I do not have a criminal record. I have a disturbing the peace after I was disqualified for running for ASB president,” he said. “They said I was vandalizing.”

In 2011, Korsgaden ran for Associated Student President of San Diego State and was disqualified by the Student Associated Election Committee.

An April 7, 2011 report posted by the Daily Aztec, the SDSU student newspaper, states:

“Former Associated Students presidential candidate Kris “Buk Fidy” Korsgaden was arrested and transported to county jail last week as a result of the damage caused by stickers used in his presidential campaign. The stickers, were abnormally adhesive and caused more than $4,600 in damage to the surfaces which they were removed from. It took 22 days for campus maintenance to remove all of the SuperGlued stickers. Korsgaden has since been bailed out of county jail.”

Korsgaden was ultimately disqualified from the election.

“They disqualified me because I had an art thing going on the side and they ruled that my art was part of my campaign and that meant I had campaigned inappropriately,” he said. “They tried to say that my music constituted campaign material.”

“A special meeting was called by the Associated Students Elections Committee on March 22 where it disqualified A.S. presidential candidate Kristopher Korsgaden for accumulating five reprimands in violation of the election code.

Professor Stephen Schellenberg filed a complaint against Korsgaden, who refers to himself as “Buk Fidy,” for sending him excessive and unsolicited emails, which did not include an opt-out method. Korsgaden also allegedly sent harassing emails to Professor Mark Freeman of the San Diego State School of Theatre, Television and Film. One reads, “It’s professors like you that ruin the ‘experience’ that SDSU can be.

The comment, which appears to be in response to a Facebook posting about a recent story in The Daily Aztec about a SDSU rape victim, reads “The rapist was in a fraternity. How much you wanna bet?” The Facebook user name, Kris BUk FIDy Korsgaden, goes on to write, “F—-. Bro-dy Carbo and his gang of rapist. Kris “BUk FIDy” Korsgaden for SDSU AS president.””

Korsgaden said that the real reason why he was disqualified was that they did not like what he was saying.

“Harassing emails?” said Korsgaden. “I don’t know what that was all about. I never harassed anybody.”

A corporation was allowed to set up at San Diego State campus, said Korsgaden, and the corporation privately ran the student government for profit.

“They didn’t want the public to know that,” said Korsgaden.

He said that he was also informing the public during his campaign about the teacher’s union strike that prevented students from going to class. He felt the parents should know that while they were paying full price for their child’s tuition, one-sixth of the class time was canceled.

“We created the rap music personality [Buk Fidy] to rap about running for student council and they got so pissed off because how clever it was. The lyrics were about how a corporation runs the ASU for profit. I take issue with a lot of higher education. Higher education has definitely over stepped its bounds and it is like a sovereign nation,” he said.

“I see a very big break up in higher education over the next two decades. Growth has come to stand still. Who needs another philosophy major?”

The Tulare County Registrar of Voters will be mailing out the mail-in ballots round October 10th and the last day to vote will be November 8th.

For more information the Visalia Chamber of Commerce is hosting a candidates’ forum on the Visalia City Council races October 24 at Café 210 from 5:00 – 7:00.