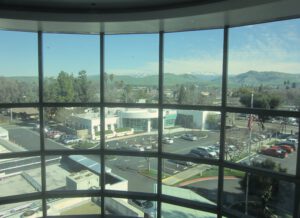 Editors note: A statement from Ela Pandya October 16. “My statement regarding a hospital grant for COVID-19 during a recent interview with Catherine Doe was misinterpreted. I didn’t mean to suggest that hospital administrators used the COVID-19 grant to give themselves salary or bonus payments. There was a misunderstanding due to multiple issues being discussed at the same time.”

Jyotsana Pandya, known by her friends as Ela, decided to run for the board because, “the hospital needs me to protect them from the direction in which the hospital is headed.” She has been active in the Porterville community for 32 years.

Dr. Bindu Sagar Reddy, an interventional cardiologist, said he is running because he doesn’t think it is appropriate for a husband and wife to be on the same hospital board. Pandya is the wife of Zone 2 Director Dr. Gaurang Pandya. Questions have arisen if she is legally a resident of Zone 1.

Dr. Kiran Sandhu, a Porterville dentist, was the first to file papers to run for Zone 1 but has since pulled out of the race. Dr. Sandhu said that friends approached her to run because they wanted someone honest and trustworthy to be on the board. But after Sandhu researched the board’s duties, she realized that her career and family would prevent her from putting in all the work necessary to be an effective board member.

She pulled out of the race too late to get her name removed from the ballot.

“There is so much corruption”

Finances, quality of care, and transparency are just a few of the issues Pandya worries about concerning the hospital. She said that while the CEO continues to get raises the quality of care diminishes.

The hospital recently received a COVID grant according to Pandya, but decided to financially compensate the upper management and gave nothing to the medical staff working on the front line.

Pandya added that when her husband tried to get more information concerning hospital contracts that the board changed its bylaws so board members could not get the documents they needed.

Of concern is the hospital’s contract with Comfort Care Anesthesia, which has been renewed every year for 11 years. According to Pandya the company gets three times the market price at  $3.2 million dollars a year whether they work or not.

“What did the board do?” said Pandya. “Nothing! Their response was that they did not want to tell the administration what to do.”

The issue Pandya has with Comfort Care isn’t just compensation but quality of care. According to a report written by the California Department of Public Health, one of their anesthesiologists left the room during a C-Section. Allegedly, the anesthesiologist turned the volume down on the machine’s alarm before leaving and the surgeon and staff had no idea the mother was in distress. The mother turned purple from a lack of oxygen. The baby survived but the mother died 28 days later.

The incident put the hospital in “Immediate Jeopardy” of losing their accreditation. Pandya said there have been 15 other complaints lodged against the hospital.

Because of her concern for the hospital she bought a house on Brian Lane so that she could run for the seat in Zone 1. Her husband lives on North Belmont and is running in Zone 2.

“I have to be living here 30 days before the election. That’s what the law says.”

“This is now my official domicile and where I am registered to vote. If I have to make the sacrifice I will have to live away from my husband,” said Pandya.

When asked about concerns from the community that she and her husband will form a voting block she said that she brings a needed set of skills as an owner of a surgery center independent of her husband.

“This is my calling. I know health care. I know how insurance companies do not serve patients or doctors. I am an independent thinker and will not do just what my husband says. Why would I waste my time with that?”

She said Dr. Rakesh Jindal, Dr. Ashok Behl, and Smith often voted as a block and creating a three–two split on board decisions. According to Pandya, when Smith decided not to run, Jindal and Behl wanted the new trustee to join their “cabal” and recruited a mutual friend, Sandhu.

Pandya filed her papers the next day. When Reddy discovered Pandya was also running  for Zone 1, he quickly threw his hat into the ring.

Pandya’s husband’s seat in Zone 2 is also up for re-election, and to thicken the plot, his challenger is allegedly an owner of Comfort Care Anesthesia. According to Pandya her husband’s challenger, Kuldeep Jagpal’s, official domicile is in Porterville. But she says that he lives fulltime in Morgan Hill and has hospital contracts up and down the state.

“Why is he allowed to run but I am under scrutiny? This is how the crooks win.”

Reddy said he was asked by several of his patients and hospital staff to run for the Sierra View Hospital Board in order to challenge the “attempted takeover by a husband and wife.”

Reddy said the couple were “disingenuously contesting from 2 different zones” even though they are married and had allegedly lived for more than 30 years at the same address in Zone 2, where Dr. Guarang Pandya has been a board member for 12 years.

Reddy intended on running for the board in 10 years after he retired, but, under the circumstances, decided to run for Zone 1 now. Reddy does not want to be on the board long-term and would prefer more community business people rather than doctors run the hospital, adding that, financially, the hospital was in a strong position.

While serving on the board Reddy said that Guarang Pandya “has all these weird ideas.” He said at one meeting Guarang proposed that Sierra View buy the Porterville State Hospital. He said the matter was quickly dropped.

Reddy was also critical about how Guarang micro manages and inappropriately interferes with the medical staff. He said that it is not appropriate for one board member to be collecting information about individual staff, but that it needs to be done together as a board if there is a problem.

“There is a due process for complaints against a doctor and they go to the Medical Executive Committee (MEC) and the board needs to support the MEC,” he said.

Reddy was the former MEC Chief of Staff but now is a member at large.

He feels that Ela Pandya is running for the board to push her husband’s agenda. Guarang has allegedly maneuvered to get four times the pay at the hospital but Reddy said that the board has always rejected his requests.

When asked about the COVID money doled out by the hospital Reddy said he didn’t know about the grant specifically but said that Pandya was lying.

Reddy was also not aware of the report completed on September 4, 2019 by the California Department of Public Health concerning the hospital being under “Immediate jeopardy,”

“I do not think it is factually correct.”

Reddy has complained to the Porterville Recorder, hoping that it would do an article on the Pandyas, but said it hasn’t reported on the election, possibly “because of the heavy advertisement that Dr. Pandya does in the local newspaper for his business.”

“Why does he advertise in the paper? I can’t see any patients unless they are a referral. I am busy as hell.”

While Pandya says that Reddy is aggressively campaigning against her in order to continue the corruption, he insists that he is running at the request of the community “to stop this fiasco from happening since I felt it was unfair and unethical to have two family members on the board at the same time.”