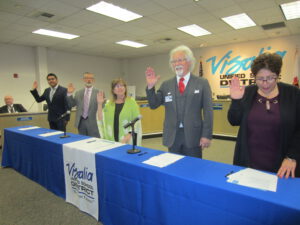 Tuesday saw the swearing in of newcomers and incumbents to the Visalia Unified School Board.

Those members taking the oath of office were Walta Gamoian from Area 1, Paul Belt from Area 2, Joy Naylor from Area 3, Todd Oto from Area 4, and Randy Villegas from Area 6.

After the swearing-in, Gamoian was chosen to be the Board President and Jacqueline Gaebe from Area 7, who was not up for reelection this year, was chosen as Board Clerk.

The election season started early this year with a group Visalia’s Students Deserve a Better Education calling for all qualified candidates to run for the Visalia Unified School Board.

The group hoped having board members with a business background would preempt another Measure A “debacle.” The group claimed the public was misled about the feasibility, or need, of Visalia building a fifth high school when voting to approve Measure A. Over a million dollars were spent on a high school the district couldn’t afford and may not have even needed.

The group was also concerned over the board’s lack of urgency over VUSD’s low test scores and substandard quality of education.

The goal of the Better Education group was to have at least one or more challengers to run against each incumbent to “spur debate.” The group mostly got their wish as four seats had one or multiple challengers, with Area 4 having four people running.

At soar spot was the fact that two of the sitting board members, Villegas and Catalina Blair, had never faced the voters but rather were appointed. Former Trustee Juan Guerrero had been on the board on and off for about 16 years.

Elections night netted some surprises and some expected results.

Former Board President Guerrero lost in a close race against newcomer Paul Belt. Blair’s race was almost as close to Guerrero’s as she lost to former VUSD Superintendent Oto.

Three incumbents survived though with Gamoian and Villegas commanding convincing victories and Naylor being uncontested.