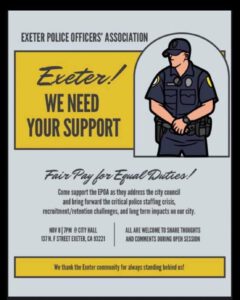 At dusk on a June evening this year, a car drove by Vicki Riddle’s house on D Street in Exeter.

The driver stopped the car, got out, and started shooting at two teenage pedestrians.

“It was very traumatic,” said Riddle.

Riddle was at the start of her campaign for Exeter City Council against incumbent Steve Garver. She was running on a platform of fixing the water infrastructure, fiscal responsibility and public safety, amongst other items.

But that all changed.

“When it personally happened to me, all other issues went on the back burner and public safety was my focus,” said Riddle.

Unbeknownst to Riddle, she opened a Pandora’s Box of frustration that would unleash ridicule of her campaign from the local newspaper and create push-back from the city’s council and administration, but conversely garner support from Exeter’s residents and police department.

Lines had been drawn.

The Sun-Gazette, Exeter’s City Council and city administration insisted the crime rates are within the national average and that the city can’t afford to raise law enforcement salaries.

The residents of Exeter and the Exeter Police Department say there is a lot the city can do.

About three years ago Riddle formed a Neighborhood Watch on her block and the crime rate in her area decreased significantly. Riddle went to the Exeter City Council meeting to encourage the members to set up their own neighborhood watch on their blocks.

“All I heard was crickets,” said Riddle.

That’s about to change.

What can be done about crime in Exeter?


“The crime that is going on here [in Exeter] is not worse than it is in other places,” said Paul Myers, The Sun-Gazette‘s editor, on the latest edition of the paper’s Paper Trail podcast. “And if it is, it’s marginal.”

“She pushed people into being fearful of their community, and she is probably also going to win. Because why the fuck not?” Myers said.

“So, you can get into all of the emotion about politics and like, what she’s trying to stir up here, which is just infuriating in and of itself — because you’re looking at just piss-poor, terrible ideas being run over your community, and someone is trying to enforce them onto the governing body of said community.”

Myers said “that will get you nowhere, if you just try to attack it like that,” and said that “what we try to do here [at The Sun-Gazette] is you just try to look at the context and the facts.”

Myers gave Farmersville and Woodlake as examples of cities with similar problems as Exeter’s — losing officers to larger communities that can pay more, calling Riddle’s claims of an underfunded police department “blatantly untrue.”

“Staffing needs have been met”

During the podcast, Ellis and Myers said that Exeter City Administrator Adam Ennis told them that 70% of the city’s general fund already goes towards law enforcement.

They said that Ennis told them Exeter would likely need to take money from road maintenance in order to increase its law enforcement budget.

In an October 19 Sun-Gazette article about the Exeter City Council campaign Ennis was quoted saying the city has already created multiple new positions including a sergeant, lieutenant, patrol officer and a community services officer through Measure P 1% sales tax.

“Since adding these positions, the department’s staffing needs have been met.”

The article confirmed that the crime rate in Exeter had increased, but stated, “However, that is not unique to the nation. This trend has been occurring throughout the country over the same period of time.”

While most of the nation was huddled around their TV and computers waiting for election returns or attending watch parties, Exeter’s council chambers were brimming with angry and concerned citizens wanting to show support for their local police.

The Exeter Police Officers Association (EPOA) had dispersed a flyer asking the public to attend the November 8 city council meeting to express their concerns about crime in Exeter and support the local police.

“How do you think it makes the Exeter citizens feel knowing that our entire police force feels that our city council and our city management and our local paper doesn’t support them? How did it make us feel having to see our own police force having to start their own grass roots effort asking citizens to come to the city council meeting to show their support?” said one attendee.

The meeting was standing room only in support of the police with even more watching the live stream.

“I blame our local paper for writing an article on October 19, 2022, stating the crime trend has been occurring through the nation,” Gagnon said at the meeting. “Well, this is Exeter.”

Sherry Forcum, owner of the Whistle Stop, said, “We need the city council to hear the needs of the police department and I’m just surprised that we are here right now. We need to step up and do the right thing for our police.”

“The Exeter Police Department has been understaffed for over the last 6 months,” the letter states. “While fully staffed, the department employs 7 patrol officers, 2 detectives, 1 school resource officer, and 4 sergeants (14 total). The current staffing crisis has forced the department to run skeleton crews of 1 patrol officer and 1 supervisor per shift.”

Running the city on a skeleton crew puts the entire community at risk, Prideaux said.

“With only 1 officer and 1 supervisor on a patrol shift, there are multiple instances where our city is protected by a single officer….. In these staffing conditions we are experiencing delayed response times, additional liabilities, and severe safety risks to both our officers and the public. The quality of response and service we stand for as public servants has diminished.”

In regards to salaries, “Exeter is one of the lowest paid agencies in Tulare County. Officers within the Exeter Police Department make upwards of $10.00 less per hour than surrounding agencies.”

“This substantial pay gap is the single major driving force behind our current staffing challenges,” read Prideaux. “Our department is hurting. Our officers and their families are struggling. We feel strongly it is our duty to be fully transparent with our community about the issues our department is facing.”

According to Sergeant Michael Giefer, EPOA President, the police department approached Exeter City Council in April of this year. He said they went back and forth until finally the city said they were not willing to negotiate new salaries until the end of their contracts in June of 2024.

As a result of the “city closing the door on negotiations,” Giefer said Exeter PD immediately lost three officers and that two more officers and two sergeants have started the process of transferring out of Exeter’s PD.

But, he said, if the city looks like they will come back to the table the four officers might delay leaving the department.

What do crime statistics say – and does it matter?

NeighborhoodScout’s Crime Index gives a numerical rating to each city’s level of crime based on how many crimes occur per 1000 residents.

On a 0-100 scale, where 100 is safest and 1 would be the most dangerous cities, NeighborhoodScouts Crime Index gave Exeter a rate of 16. That means 84% of cities in the United States are safer than Exeter.

In comparison NeighborhoodScouts rated Farmersville at 31, Woodlake at 46 and Lindsay at 24.

According to another website that tracks public safety, crimegrade.org gave Exeter an over grade of C-

The C- grade means the rate of crime is slightly higher than the average US city. Exeter is in the 33rd percentile for safety, meaning 67% of cities are safer and 33% of cities are more dangerous.

According to Crimegrade, a crime occurs every 18 hours 1 minute (on average) in Exeter.

But residents take issue with comparing Exeter with Farmersville and Woodlake, of which they have little in common except they are located in the same county.

Exeter punches far above their weight, with their Chamber of Commerce equal to that of Hanford’s, a city six times their size, and Exeter’s Downtown rivaling that of Visalia’s, the county seat.

The EPOA letter also took issue with the comparison, “we strive to be the agency that is setting standards for others to follow [..] rather than remaining in mediocrity because ‘those around us do so also.’”

Ellis and Myers believe Exeter is doing the best they can in terms of crime and the larger employment landscape — and were openly hostile towards Riddle for focusing her campaign on public safety.

“Her campaign tactics were so nakedly Trumpist, I would consider it embarrassing,” Myers said.

He said if he adopted similar tactics, he would “be embarrassed, because I would be saying I have no intellectual capability myself.”

“[Garver] actually cares about his community, and he’s not flamboyant about trying to incite a vote. He’s just saying, if I do the work and people notice, they’ll re-elect me. And it’s a very, very stand-up way of running an election for your community,” Myers said.

“And Vicki Riddle is not that, right? And that’s sad. Sad for a lot of reasons. It’s sad because people are taken in by it, not by any fault of their own, but because they’re underinformed, and it’s just predatory,” he continued.

So what do the residents of District D say about Riddle?

Votes are still being counted, but so far, 60% have cast their ballot for Riddle.

And what did the Exeter City Council think after EPOA and residents stood up for their police force?

According to Giefer, Ennis approached the EPOA the day after the city council meeting and said the city was reconsidering opening up negotiations.

“He said he has to do his homework and then meet with the city council and would get back to us in December,” Giefer said.

Riddle ended public comments that night encouraging the city council and administration to listen to the public.

“These are the only people who matter. These are your constituents. I hope that you take what Adam says and also listen to them,” motioning to the crowd. “You can make this work, you can.”

13 thoughts on “Exeter law enforcement says they’re underpaid and crime is on the rise — who’s to blame?”