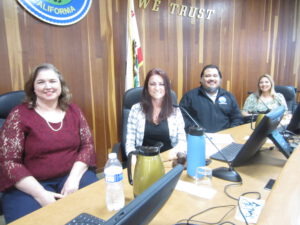 If you are searching for a layered, complex, and slightly crazy city council race – Hanford never disappoints.

Factions have emerged between the candidates running for city council, and the obvious bloc seems to be Hanford City Council members Amanda Saltray and Francisco Ramirez, and candidate for District E Cheyne Strawn, who all belong to the Libertarian Party.

But if you pull back the curtain and take a closer look, it’s actually the three challengers, Travis Paden, Lou Martinez, and Mark Kairis who are running as a slate and have the potential to vote as a bloc if all three are elected November 8.

Saltray (in District A), Ramirez (in District D), Strawn (in District E) and Hanford Mayor Kalish Morrow, who is not up for re-election, are members of the Libertarian Party.

If Strawn is elected, four of the five Hanford City Council members will be members of the Libertarian Party, which will most likely be the first of its kind in the nation.

Saltray, Ramirez, and Strawn share almost all the same donors. About two thirds of Saltray’s donations and approximately 90% of Ramirez’ and Strawn’s donations come from the Libertarian Party.

The Libertarian Party, and their members nationwide, has donated a total of approximately $27,500 to the three candidates.

Brent Olsen was Morrow’s campaign manager when she was elected to the council in 2020.

Gold Rush Consulting is offering their services pro bono in an effort to get their fellow Libertarian Party members elected, said Francisco.

“The others” being Hanford City Council candidates Paden, Kairis, and Martinez.

Strawn is facing Mark Kairis for the seat left open by Council member Art Brieno. Strawn was appointed by the City Council to the Hanford Parks and Recreation Commission where he currently serves as the Vice Chair.

Strawn said he, Saltray and Ramrez are not campaigning together, have not endorsed each other, and will not vote as a bloc if elected.

“Libertarians believe in individualism,” said Saltray.”I vote for the people.”

She added the current city council where she is a member has no factions or voting blocs even though three of them are Libertarians.

On the other hand, Paden, Martinez and Kairis have aligned themselves posting their signs together and spreading the same negative messages about their challengers on social media.

Paden, Martiez and Kairis’ also share several of the same donors who have similar political agendas. Their donors are almost 100% locals with a propensity towards down town business owners who have favored restrictive city zoning during past city council debates.

The zoning laws were liberalized just in the last year, but a new council could easily reinstate the old restrictive zoning code.

Ramirez concurred saying the Libertarian donors to his campaign believe in freedom, local control, and less taxes. “That’s all they ask for in return, is to support their values. Some donors from Hanford want something else in return”

But Ramirez has also accepted donations from local developers, a $1000 from developer John Kashian and $500 from the Hanford Mall. He said that they share similar values.

“I believe in liberalized zoning so it makes sense that Kashian would want me sitting on the council.”

Kashian is the developer of the Hanford Costco.

Ramirez was happy to accept the Libertarian Party’s check because they share the same principles of how to run local government.

He also said Martinez is being financially backed by the same group of Hanfordites who have tried for years to remove him from office. Martinez’ list of doors on his FPPC filings is a who’s who of Ramirez critics, such as Glenda Dwyer, Bob Ramos, David Ayers, and Dan Chin.

“You have to fight fire with fire,” said Ramirez.

Rumors of predetermined appointment not going away

Saltray’s joining the Libertarian Party soon after being appointed to Draxler’s seat last year has not helped quell rumors that it was predetermined.

Three independent sources contacted the Valley Voice hours after Saltray’s appointment in 2021 to express their belief that her selection had been decided before the interviewing process even started.

The final vote was 3-2 with then Mayor Francisco Ramirez and Council members Kalish Morrow and Art Brieno voting for Saltray to replace Drazler. Council Members Dianne Sharp and Draxler voted for Travis Paden.

Saltray beat out 11 applicants even though she was one of the least qualified.

“I was their default choice,” said Saltray.

During the council’s special meeting to appoint Draxler’s replacement, the more experienced candidates could not get a majority of support, so three council members ended up voting for Saltray. She said that she and Morrow had become casual friends and that she worked on Morrow’s 2020 campaign but didn’t believe she was Kalish’s first choice.

Ramirez’ confirmed Saltray’s hypothesis, saying that before the meeting to appoint Draxler’s replacement he was leaning towards Paden because of his overall experience with government. But after the finalists had finished their interviews Ramirez revealed he was struggling with his decision.

When asked a few days after the special meeting if Saltray’s appointment was predetermined Ramirez said, “That is absolutely not true.”

He stands by that today.

“I’m glad I chose her!” he said. “She had no experience and had not been tainted by the political system.  She has a fresh perspective.”

As for Paden, Ramirez said that he has superseded his authority on the Hanford Planning Commission and that the Hanford City manager had to talk to Paden about it. Ramirez also feels that Paden is not as easy to work with on the council as Saltray.

“I was shocked how easily our personal freedoms could be taken away,” referring to the shutdowns during COVID. It was in response to the state’ closing businesses and churches and mask mandates that Saltray joined The Libertarian Party.

Who are the Libertarians?

Strawn pointed out that if the city council was majority Republican no one would notice.

But Republicans range from 30% to 50% of the registered voters in California so it makes sense that the Republican Party would dominate many city councils throughout the state, especially in the Central Valley.

On the other hand, Libertarians are only one percent of the registered voters in California and it defies the odds that a majority of city council could be members of such a small party.

And while their views are not seen as extreme, their very small numbers makes Libertarians a fringe party by definition.

The basic tenants of the Libertarian Party aren’t complicated. They are individual freedoms, lower taxes, less regulations, and local control.

The pandemic saw an exodus of mainly Republicans leaving their party to join the Libertarian Party because of the shutdowns and mandates.

The Libertarian Party’s national platform is not as mainstream.

According to their national platform Libertarians strive to repeal income tax, minimum wage, the social welfare network, the Affordable Health Care Act, and Social Security. They also want to decriminalize prostitution and feel it is the parent’s responsibility to get their children educated and believe in the dissolution of the public education system.

Asked about the prospects of Hanford having four Libertarian Party City Council Members, Strawn wanted to get back to the issues, but Ramirez was enthusiastic.

“I’m excited,” said Ramirez. He said Hanford is a trail blazer and that the city might be the first in the nation to have a majority Libertarian Party.

Indeed the Kings County Libertarian Party is excited too. Their website states,

In mid 2021, the council elected to make an appointment to fill a soon to be empty city council seat. Council appointed Amanda Saltray, who also went on to reregister as a Libertarian giving the city of Hanford a Libertarian majority on council.”

But Strawn wants the focus to be on Hanford.

“This is a non partisan office,” he said. “I’m just running to make a positive change in my community.”

Strawn said he has been going door-to-door and the biggest issue is public safety infrastructure. He said the south side of Hanford needs sidewalks, better lighting, and speed bumps. He gave Hume Avenue as an example.

“We need folks on the city council who are going to do what the people ask and not be ignored. The south side is neglected,” said Strawn.

Strawn also wants to roll back some of the regulations imposed on residents such as not being able to remove trees. “Homeowners are responsible for maintaining the medians, but when the roots of the trees tear up the side walk and medians they aren’t allowed to remove them.

“These are very basic issues, and someone needs to start dealing with them”