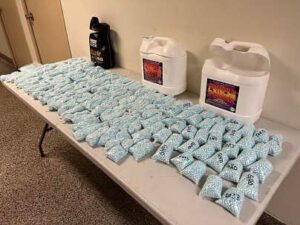 Two men allegedly transporting 150,000 fentanyl pills from Mexico to Washington State were stopped along Highway 99 in Tulare on June 24, released on their own recognizance the next day, and failed to appear at a court hearing on Tuesday.

The weekend release of the men, Jose Zendejas and Benito Madrigal, has started a blame game in Tulare County: multiple public safety agencies are now laying the blame at each other — and the state government.

Boudreaux also took to FOX News the same day, calling for tighter border security, justice reform, and said that “California’s system of justice is failing us all.”

“I didn’t even learn of the order until it was far too late. This assessment was done behind the scenes, basically, without ever contacting me as the sheriff or even asking me what I believe the risk to our public safety would be,” Boudreaux told FOX News reporters. “I made a phone call to our district attorney, who also had no information as to this assessment and release.”

The probation department hit back the same day, stating that their public safety assessments are not the final word in whether an inmate is released.

“The [Public Safety Assessment] does not provide a recommendation for pretrial release, it provides an assessment outcome. The probation department does not have the authority to order the release of inmates and we did not make a recommendation for release of these individuals,” the probation department’s statement reads. “The assessment process is not done ‘behind the scenes,’ the development and implementation of Pretrial functions in Tulare County was a collaborative and transparent process involving representatives from our law enforcement partners.”

The statement adds that the final decision rests with the Tulare County Superior Court’s judicial officer, and that the court “ultimately decides the release of individuals.”

Mikki Verissimo, the court’s judicial officer, signed off on the release of the two men. The court released the probation department’s safety assessment and Verissimo’s signed order.

A statement from the Tulare County Superior Court on June 29 states that “there was no additional information provided by the District Attorney or the arresting agency requesting bail deviation or detention holds, as is allowed by current statute.”

“At the time of this press release, the Tulare County District Attorney has not filed charges in this case,” the release stated.

The district attorney’s entered the fray yesterday with their own press release — and officially filed charges against the two men.

“The Office of the District Attorney and the Tulare County Sheriff’s Office were not consulted regarding the release,” the district attorney’s press release stated.

The Voice spoke to John Sarsfield, an attorney with the Law Offices of Melo and Sarsfield; he is the the former district attorney for San Benito County.

“If they are going to assign blame, it’s all their fault,” Sarsfield said.

Sarsfield says that the suspects did not belong in jail while waiting for a conviction, because the crime was not one of violence but one of transporting a prescription drug widely used by the medical community.

He added that most defendants show up for their scheduled court appearances — even though this pair did not.

According to the district attorney’s press release, “If convicted on all counts, each defendant faces up to 14 years in state prison. Following today’s case filing, prosecutors requested a court hearing regarding bail. At the hearing in Department 10, Judge Nathan Leedy rescinded the prior release on own recognizance order and issued arrest warrants for the men. The court also set bail at $2.15 million. An appearance date of July 21, 2022, remains scheduled.

“This is an active investigation. If the public has information regarding these defendants or their whereabouts, contact the Tulare County Sheriff’s Office.”