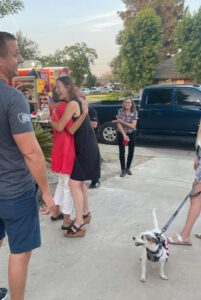 Sarah Hacker defeated Kings County District Attorney Keith Fagundes in a landslide victory and pulled off one of the biggest political upsets in recent memory — 59% to 40% as of the latest count — and will be the first woman to hold the office.

But who is she?

Sticking to campaign issues, Hacker didn’t spend time talking about her personal life. But now that the race is over, it’s time to learn what makes the new district attorney tick.

Hacker knew what she wanted to be when she grew up when she was a 10 year old little girl sitting around the television with her family watching Angela Lansbury’s “Murder She Wrote.”

The show didn’t have a lot of court scenes, but Hacker knew she wanted to do something that used her intellect – like be a lawyer.

After spending nine years working at the district attorney’s office and seven years in private practice, Hacker thought “there was something in me that couldn’t allow Fagundes to run unopposed when he had engaged in violations of justice and breached the public confidence.”

The first person who suggested Hacker run was Maryann Gilbert, a defense attorney and occasional contractor for the DA’s office.

“Shortly after the [Robert] Waggle lawsuit, Gilbert said I should run and I would make a great DA,” Hacker said.

Robert Waggle, a former investigator at the DA’s office, filed suit against the county in June alleging that he was sexually harassed by Fagundes.

Over the next five months Hacker went back and forth on the decision to run and waited for someone to step up and throw their hat in the race. When she finally decided to file her paperwork she was unaware that former DA Greg Strickland had also entered the race under the same pretense.

Strickland pulled out of the race soon after Hacker started campaigning.

The campaign – truth and fiction

After she announced her candidacy in March of 2022, commenters on the Valley Voice’s website responded and jokingly used such names as “notasnowballschanceinhell.”

A younger woman attempting to beat a two-term, middle aged male incumbent plugged in to the community seemed like a fool’s errand, but Hacker’s mom knew better.

“If anyone said I couldn’t win, my mom would just laugh and say we would win by a landslide,” she said.

Hacker said her mom was a big believer from the beginning that this was going to be a successful campaign.

Throughout Hacker’s campaign, there were grumblings that she didn’t live in Hanford and that she had very little experience in the courtroom.

“I was one of the most aggressive prosecutors in the DA’s office,” Hacker said, adding that she has lived in Hanford since 2005.

She said she has a hunch about who spread those rumors but didn’t want it on the record.

Hacker has prosecuted approximately 65 cases, the most consequential being sexual abuse cases, she said.

One of those cases – and one that both deeply affected her and changed the way Kings County conducted business — involved the sexual assault of a 5-year-old who was sodomized by his mother’s boyfriend.

“The 5-year-old had a very hard time explaining what had happened,” she said.

“Because of his difficulties in communicating, I was the first DA to have brought closed circuit television to the courtroom,” she said. “It was the first time it was brought to Kings County so the child did not have to go into the courtroom and testify in front of his abuser. Instead, he was taken to a safe place and was able to testify from there.”

The boyfriend was sentenced to a life term.

“As a lawyer, I had always been compassionate towards children, especially children who had experienced abuse; it gave me the tools to be able to express my compassion in a way that made it safer for kids to testify,” she said.

In every sexual abuse case before that, the child had to take the witness stand in Kings County.

Hacker has also decided not to disclose her personal view on abortion, in direct contrast to Fagundes’ anti-abortion stance.

“No matter what, I don’t want victims who have been raped and have suffered an unintended pregnancy think that I would judge them,” she said. “What I want rape victims to know is that I believe in fully prosecuting rapists and sexual offenders. It doesn’t matter what choice they made about terminating their pregnancy or keeping it.”

Another consequential case in which she was the lead prosecutor concerned a conspiracy to commit murder at Corcoran State Prison.

Whoever was in charge of the yard gang could tell the gang members what to do, take a cut of whatever drugs were sold, and order hits on people, Hacker said.

The defendant wrote a “kite,” a note handed around in prison.

The kite ordered the hit of the challenger, who was the victim, because he had betrayed the trust of the leader and had committed treason. Two inmates, who had been sentenced to life terms, attacked and stabbed the challenger with intent to kill but he survived.

“It was a three week trial and they were found guilty. But all three ended up appealing and the Fifth District Court of Appeals ended up overturning the verdict because they believed ‘there was too much gang evidence introduced in the trial’,” she said.

“When I told my parents I wanted to be a lawyer they were ecstatic because I would be the first lawyer in the family,” said Hacker.

Hacker was raised in Clovis with her little sister. Her dad managed a successful car auction business while her mom raised the girls, flipped homes, and had several other home-based businesses.

She attended University of California Santa Barbara and then Southwestern Law School in Los Angeles.

A week before entering law school, Hacker got married.

“It was not ideal and honestly he wasn’t that great of a guy,” Hacker said. “The divorce was 20 years ago and we fell out of contact. You know what? It was a great learning experience.”

Her first job was at the Kings County District Attorney’s Office in January 2006. She then transitioned to private practice working at Dias Law Firm in Hanford in March of 2015.

During her time in private practice, she was engaged in criminal defense, family law, and juvenile law.

“There is a huge repertoire of cases and that is something that I am going to miss when I become the DA. My civil practice made me a much more well-rounded attorney,” she said.

During the campaign, her parents and boyfriend of eight years were her biggest cheer leaders and campaign workers.

“I can’t even begin to express my gratitude towards my mom,” Hacker said. “She was out sitting in front of the post office handing out flyers, she was out knocking on doors in the middle of May in the heat, non stop for hours on end.”

“She truly was the backbone of my campaign. I have the highest amount of respect and admiration for her because she is almost 70 years old,” she said. “It was my mom who told me the first results election night.”

Hacker said her boyfriend was also a big part of the campaign, putting up campaign signs, helping with speeches and debate prep.

During our interview, Hacker’s dad was laying in the ICU fighting an infection and had just turned the corner.

“My dad was a people person and was very empathetic. He could just really read people well,” she said.

“Everyone loved my dad and my dad loved people.” Hacker said he was a very successful manager and had this piece of advice for his oldest daughter: “listen to your people and leave your ego at the door.”

5 thoughts on “Kings County will have a new district attorney: but who is she?”