“Visalia’s Students Deserve a Better Education” is the clarion call on a flier distributed by a concerned group of citizens trying to recruit high quality candidates to run for the Visalia Unified School District (VUSD.)

The group responsible for the flier are “leaders from the private sector” who are worried about Visalia’s students and the quality of their education. 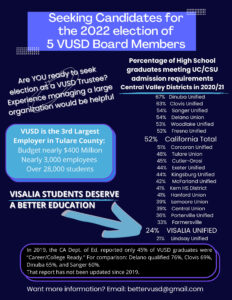 “The lack of quality is especially a disservice to the socio-economically disadvantaged kids. 68% qualify for reduced priced meals or their parents did not graduate from high school,” said Jerrod Jensen, a member of the group.

He said that Dinuba Unified, with a fraction of the number of students, beats out Visalia in several academic categories but that the Visalia board doesn’t show any sense of urgency to fix the problems.

The objective of the group is to have at least one or more challengers to run against each incumbent and “spur debate.”

Out of the seven Visalia Unified board seats five are up for re- election.

“We are not campaigning for or against any one board member,” said Jensen.

Their goal is to get a diversity of experience on the board. 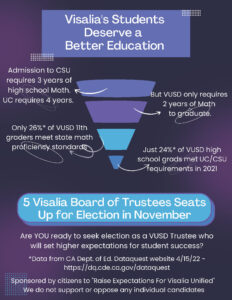 “A healthy debate will force people to defend their decisions and prompt a discussion about the future of this district,” he said.

And what Jensen means by experience is someone with a background in business, such as running a private business or a senior manager at one of the major companies in Visalia’s industrial Park.

“They would bring an outside view to the board of how to run a business,” said Jensen.

The group’s flier points out that the district is the third largest employer in the county with a $400 million budget with 3000 employees and 28,000 students.

The group believes that having board members with a business background will preempt another Measure A “debacle” – the group claims the public was misled about the feasibility, or need, of Visalia building a fifth high school.

The five board members that are up for re-election are Board President Juan R. Guerrero from Area 2, Board Clerk Walta S. Gamoian from Area 1, Catalina Blair from Area 4, Joy M. Naylor from Area 3, and Randy Villegas from Area 6. 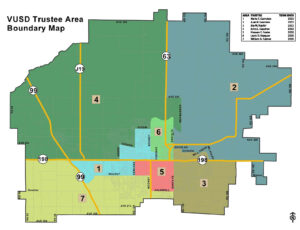 Two of those board members, Villegas and Blair, were not elected but appointed.

Guerrero has been on the board on and off for about 16 years and Gamoian and Naylor are just finishing their first terms.

According to the Tulare County Registrar of Voters, the nomination period to run for Visalia Unified School Board is from July 18 to August 12. Those dates will be extended to August 17 in those districts where incumbents do not file to run.

Interested persons can enter the nomination portal on the Tulare County Registrar of Voters website to make an appointment at the registrar’s office to file their paperwork and take the oath.

The registrar’s office is waiting until after the June 7 primary to put the nomination period on their website calendar to avoid confusion.

Visalia Unified board allegedly shows a lack of urgency

The quality of education is the group’s number one issue, but they are concerned over the board’s alleged lack of urgency.

Jensen claimed that Lindsay Mann, the former CEO of Kaweah Health, heard increasing talk that Visalia Unified was an impediment to the hospital being able to recruit doctors because of the low quality of education in Visalia.

He said the topic of the district also comes up in discussions about developing the Industrial Park.

Companies are able to recruit blue collar workers but can’t attract upper management professionals for the same reason, he said.

One example Jensen gives is the fact that 67% of Dinuba Unified High School students graduate meeting University of California (UC) or California State University (CSU) admission requirements. But only 24% of Visalia Unified’s high school students qualify to apply to a UC/CSU.

Visalia high school students come in second to last in Tulare County only to Lindsay Unified with a 21% qualifying, he said.

Redwood has an acceptable 55% of its students meeting UC/CSU admission requirements, which is above the state average of 52% – but Jensen states that Mt. Whitney, El Diamante, and Golden West come in dead last in Tulare County.

Golden West only had 2 seniors meet the university’s requirements out of a class of more than 300 students.

Jensen said a board member disagreed with his numbers but he said these are the numbers that the district submitted to the state.

“The final breaking point for our group,” said Jensen, “was when this board again delayed the requirement for [students to take] 3 years of math in order to graduate. VUSD was scheduled to make that change for the graduating class of 2022 – then delayed to 2024 – delayed again to 2025 – and now delayed to 2027.”

“That is simply a dereliction of their responsibility to graduate well educated kids.”

“The public was misled on Measure A”

The group does not want to re-litigate Measure A but felt that a board member with a business background would have communicated to the public that there was insufficient funds built into the bond to pay for a fifth high school.

In contrast, Measure A received 60% of the vote on the belief that a new high school was going to be built.

Jensen says that not only was there not enough money in the bond, but Visalia’s declining birth rate didn’t justify the need for an additional high school.

“The public was misled,” said Jensen.

Measure A was a $105 million bond measure that intended to allocate $30 million for existing school upgrades and $75 million to build a new high school. The new high school was projected to cost $150 million and former Superintendent Todd Oto assured voters that the state would match the district’s $75 million.

In reality the state was only going to match the school district about $40 million because the state does not match funds for pools, community auditoriums, stadiums, etc.

“Voters were badly misled by campaign claims that were not a specific legal obligation in the official ballot language,” Jensen said.

When the time came for the board to see a presentation by Mangini Associates of the four designs to choose from for their new campus, they “postponed” the agenda item. In the end, the board never even discussed the designs.

But not before Visalia Unified paid Mangini Associates a million dollars for their work.

“What we want are people running for the board who are really interested in the quality of education in Visalia,” said Jensen