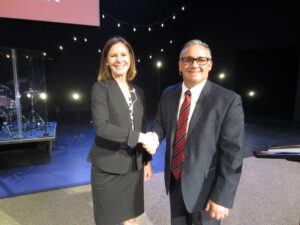 The gloves were off at the Kings County District Attorney candidate forum on May 2.

The forum, hosted by the 1776 Sons of Liberty group, was attended by approximately 300 people who turned out to hear the two candidates spar in the most watched race in Kings County.

Keith Fagundes, the incumbent Kings County District Attorney, is facing a challenger in Sarah Hacker. The race will be decided in a little more than a month at the June 7 primary; mail-in ballots will arrive around May 9.

Hacker worked at the Kings County DA’s office for nine years then left in 2015 to work at Dias Law Firm where she is now a partner.

Fagundes has been the Kings County DA since 2014 and has worked in law since 1999.

After rattling off her qualifications, Hacker threw the first punch saying that “the DA’s actions have called into question his integrity. I am compelled to stand up because I know I can do better.”

To buttress her claim, a campaign worker handed out copies of former investigator for the DA Robert Waggle’s suit against Kings County. In the suit, Waggle makes claims against Fagundes of sexual harassment, hostile work environment, and retaliation.

“You’ve heard rumors and lies that there is a moral problem in the DA’s office and that is false,” Fagundes responded. “We have heard a lot of accusations but no facts to support it.”

When answering the question about how to combat rising crime in Kings County, Hacker responded by claiming that Fagundes’ office is spread too thin.

“Right now, we have a DA’s office that has spread itself too thin. My goal is make the office more efficient,” she said.

Hacker said that the current DA has programs that overlap with the police and sheriff’s department.

In a retort, Fagundes said when he took over from the “Strickland/Hacker administration,” the District Attorney’s office was riddled with backlog that he had to clean up. Greg Strickland was Fagundes’ predecessor.

“We are the most efficient DA’s office in the state,” he said.

The term “Strickland/Hacker administration” is a misnomer, Hacker said, because she was not in an administrative position. Fagundes clearing a backlog is just part of his job, she added.

“The DA should be able to manage the caseload,” she said. “Investigators and employees should not be riding around in a luxury RV handing out flyers. They should be investigating crimes and assisting victims.”

Fagundes responded by saying that the county acquired the Mass Casualty Center RV, which Hacker was referring to, in order to prepare for a potential catastrophe such as an Interstate 5 collision or active shooter situation.

“It will happen and we need to be prepared,” he said.

“Why are we investing in luxury items for events that have never occurred in Kings County,” Hacker asked in response.

Fagundes: “If you don’t stand for something, you stand for nothing”

A question concerning the “Stand Your Ground” law in Florida highlighted the two candidates’ most significant philosophical differences in how to prosecute.

Fagundes said that Kings County already has a “Stand Your Ground” law because “I am the DA and everyone knows what I stand for.”

Hacker retorted, “In my opponent’s answer we find a fundamental flaw in the way he believes prosecution should be.”

“For my opponent to say Stand Your Ground exists because I say so is a violation of his office. He does not make the law,” she said. “The DA enforces the law.”

There are no Stand your Ground laws In California.

Differences again flared up when a question was asked about AB2223, a controversial pending bill concerning woman’s reproductive health. Opponents of the bill say that AB2223 legalizes killing a baby up to 28 days old. The bill’s author says it abolishes California’s requirement that coroners investigate stillbirths.

When asked about AB2223 Hacker said that her personal beliefs are irrelevant because “my job is to enforce the law as written.”

“A DA’s opinion matters. That’s what guides policy,” Fagundes retorted. “For someone to set aside their personal beliefs while being DA is absurd. If you don’t stand for something, you stand for nothing.”

Fagundes said that AB2223 is a “law that will invite murder, that’s all there is to it.”

Hacker explained that the proposed change to the law came about because Fagundes “illegally prosecuted women for giving birth to stillborns knowing that his actions were against the law.”

Fagundes insisted the current law does allow prosecution, and that it “in fact it demands the Sheriff and Coroner do an autopsy on the fetus because the fetus has rights.”

Hacker says that the California Supreme Court dismissed both of Fagundes’ cases he filed against the mothers concerning their still born babies.

Rob Bonta, the California Attorney General, issued a statewide communication to demand that local DAs not prosecute women who have stillbirths even if they may be at fault, Hacker said; she added that Fagundes is the reason AB 2223 was written in the first place – and would likely pass, because he ignored Bonta’s directive.

Fagundes did not mince words in his response to Hacker.

“The fact that other DAs are too weak to stand up to liberal Rob Bonta is not my problem.” Fagundes added, “If you are going to be a weak milquetoast person and do whatever the law says, or Rob Bonta, then vote for my opponent.”

Fagundes feels that just because Sacramento passes a law does not mean “you should just roll over and turn our county into a liberal safe-haven.”

Hacker did not back down.

“If you want a renegade to continue to run this county then you will not have justice. His course of action is rogue. We take an Oath of Office. We have to promise to uphold the constitution.”

A battle of who succumbs more to the “Good ‘ol Boys club” ensued when each candidate was asked about their leadership abilities.

“As your DA I will not work for the Good ‘ol Boys Club,” Hacker said to a round of applause.

Fagundes responded, stating that he is “not a typical politician.”

“Being part of a crew that will stand up to the Good ‘ol Boys Club is what I’m all about. I am not your typical politician. We don’t let outside influences dictate what we do,” he said.

He said that if that were true, his office would have succumbed “when the liberal media came knocking on my family’s door because we prosecuted women for killing their babies in the womb. Then we would have caved in but we kept fighting it.”

“I know Kings County values. I know what we stand for. I’m certainly not standing on a street corner with ABC30 protesting the murder of an infant,” he said.

Fagundes reiterated in his final statement that rumors about low office morale was false information.

“There may be a few employees who are not happy right now but I heard a saying, ‘you can make everyone happy, just not on the same day.’”

He concluded, “People are nasty and ugly when they don’t get what they want. We have seen that in criminals and disgruntled employees.”