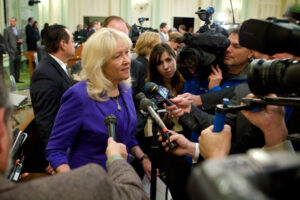 As of 11:00pm, Fresno and Tulare County Registrar of Voters has Conway comfortably in the lead with Candidate Lourin Hubbard, Democrat from Fresno, a distant second.

The top two vote getters will advance to the June 7 Primary.

Nunes resigned January 3rd. A special election was called for April 5 to complete Nunes term that will end January 3, 2023.

As of 11:00pm Tulare County Registrar of Voters reported Conway ahead of the pack with 47% of the vote and Hubbard coming in second at 14.7%.

The Fresno Registrar of Voters most recent report was 9:00pm and had Conway in the lead with 27.35% with Hubbard coming in second with 22.84%

Nunes’ congressional seat was broken up during redistricting and merged into three new districts, Congressional Districts 20, 21, and 22.

Fortunately, neither of the two front runners, Conway or Hubbard, have filed to run in any of the newly drawn districts making it unlikely the same name would appear twice in different districts on the June 7 primary ballot.

Stoll, Maher, and Garcia have filed to run against Congress member Jim Costa for the 21st district and will be on the June 7 Primary Ballot despite tonight’s results. Heng announced her intentions to run for the new 13th Congressional District against Phil Arballo, Adam Gray and two other relatively unknowns but never finished the filing process.

Conway wanted to extend her appreciation as she always does for her supporters and said she is ready to get the work done that is necessary for her constituents.

“I want everyone to know they will have access to the federal agencies they need until former Nunes’ tenure is done. I’ll finish the job.”

8 thoughts on “Conway leads in Special Election to replace Nunes”