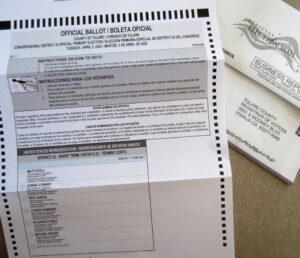 It was more of an entreaty than request when Stephanie Hill from the Tulare County Elections Office spoke during Tulare County Voices at 210 last Thursday night.

“We appreciate as many people voting early and getting those ballots back to us because with this April election we only have nine days to certify,” said Hill.

Hill was referring to the April 5 special election to replace Former Congress member Devin Nunes in the old 22nd Congressional District. There are six candidates running to replace Nunes and the cost to the Tulare County tax payer is projected to be $600,000.

Hill said that the fastest the registrar’s office has ever certified an election was 14 days in the 2020 Primary.

“That was a record,” she said. “I was proud of that record but now we are going to have to break that record and it’s going to be stressful.” Hill added, We have been asking for volunteers to help us in the evenings and on weekends because we [the registrar’s office] is going to be working all day until 10:pm and all day, Saturday and Sunday.

Even though there is only one question on the ballot Hill said there is the same amount of work. Processing each ballot takes the bulk of the time, which consists of confirming the signature and dealing with provisional ballots. Also, if the signature doesn’t match what they have on file, or is missing, the registrar’s office has to reach out to the voter so they can fix the situation.

“Nine days will be a very tight turn around and we appreciate any volunteers we can get,” said Hill.

Tulare County Voices at 210 is a monthly public event sponsored by the Visalia Times-Delta and First Presbyterian Church.