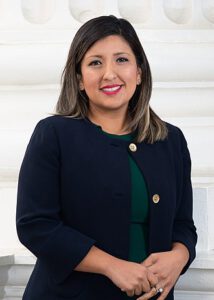 In a statement made yesterday, State Senator Melissa Hurtado revealed that she is changing course and will not run in District 14, where her Sanger house is located, but will run in District 16.

Because of redistricting, Hurtado’s Sanger home was placed in District 14 where fellow Democratic State Senator Anna Caballero plans on running. It was predicted that Caballero would easily win California Democrat Party’s endorsement for the newly drawn SD 14.

The SD 16 seat encompasses parts of Fresno, Tulare and Kern counties and all of Kings County. Hurtado currently represents half of the voters of SD 16 who ive in Kern County.

Hurtado will be running against four other Democrats in SD 16, including former Assemblymenber Nicole Parra, and one Republican. The top two vote getters of the June 7 Primary will go on to the November general election.

The following is Hurtado’s statement.

“Every day I fight hard for the people of Senate District 14 and across the Valley. It is an honor to serve my home,” Hurtado said. “When the new districts were released, I initially planned to run in the new Senate District 14, which includes my family home in Sanger. I was born and raised in Fresno County, and the Central Valley will always be home. That will never change. I also understood that circumstances could change. As the daughter of immigrants, I learned from my parents that change is scary, but sacrifice is often necessary for the greater good. I will always put what’s best for the Valley first, which is why I have decided to run in the new Senate District 16. My heart is overwhelmed with the outpouring of support I have received – from Merced County down to Kern. I am truly blessed. I look forward to continuing moving this Valley forward as a Senator of the new 16th District.”