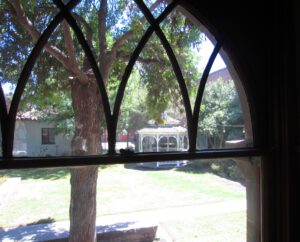 Amidst the scaffolding, tarps, and cleaning supplies the beauty of the former Carnegie Library still shines through as the board of directors scurry about to get the historic building in shipshape for Hanford’s big bash.

Hanford is turning 130 years old and everyone is invited to the party!

Carnegie Museum of Kings County Board President Jack Schwartz said Hanford’s actual birthday is the first week of August but the citywide celebration is being held July 29 – 31.

The kickoff is July 29 at 7 p.m. during the Thursday Night Market Place at Civic Center when city officials will cut and serve Hanford’s official birthday cake to the public.

On June 30, the Hanford Chamber of Commerce will do a ribbon-cutting to officially open the Carnegie Museum of Kings County (CMKC). The former occupants, Hanford Carnegie Museum Inc., lost their lease last year when they could not pay for the general liability insurance.

Since taking over the building, CMKC has been scrubbing, painting and making repairs to open in time for the celebration.

After the ribbon-cutting, the museum is hosting a lunch for $15 in the courtyard and then will give a private tour of the historic building. The tour includes a surprise exhibit of the Taoist Temple from China Alley.

On July 31 the CMKC presents a Classic Transportation Exhibit as part of commemorating Hanford’s 130th birthday. The community is invited to register to exhibit their classic transportation in Hanford’s Civic Center Park by going to the CMKC website.

Some of the vehicles already participating include antique tractors, antique fire trucks and a 1961 Jaguar Coup Racer whose engine, Schwarts revealed, was built in Hanford.

From 3 to 6:30 p.m. on Saturday will be a community open house with special hours and events at the Kings County Library, the Veteran’s Building and Kings Art Center at the Civic Center, and downtown shops will offer special discounts.

During the open house for the Carnegie Museum of Kings County, the Kings Players will perform an original recreation of the immediate aftermath of the Mussell Slough Tragedy at 3:30, 4:30 and 5:30 p.m. Tim Mattos will play music in the courtyard, and Mickey Stoddard will serve Superior Dairy Ice Cream in between shows.

The CMKC has two exhibits lined up for later this year. The first will be in conjunction with the Naval Air Base in Lemoore celebrating their 60th year of operation. The next show, starting in November, will be an exhibit of the March Banks Speedway that ran Nascar races in the 1950s and ‘60s.

Hanford’s birthday  celebration wraps up with Movies in the Park featuring Cars III.

Below is a complete schedule of events!

The birthday party kicks off during the Thursday Night Market at Civic Park at 7 p.m. City officials will cut and serve the official birthday cake.

The Hanford Chamber of Commerce is hosting the official grand opening of the new Carnegie Museum of Kings County located at 109 Eighth Street. At noon, the ribbon cutting event, luncheon and private tours will take place.  Purchase tickets at the Chamber website, hanfordchamber.com

“The Carnegie library building, a gift to the City of Hanford from Andrew Carnegie, is a historically significant building that served as the local library from 1905 through 1968. Our new nonprofit organization, the Carnegie Museum of Kings County, is proud to play a part in reviving the building as a community based museum” said Jack Schwartz, the group’s President.

At 2 p.m., Hanford’s Parks and Community Services Department invites youth ages 2 to 17 to showcase their talents with a sidewalk chalk art exhibit.  On the steps of the iconic Civic Auditorium at 6:30 p.m., Hanford Unified High School District will conduct a friendly battle of the bands, featuring the drum line teams from Hanford, Hanford West and Sierra Pacific High Schools.  From 7-10 p.m., the Chamber of Commerce will host a 50s Sock Hop dance in the 98-year-old Civic Auditorium. Purchase your tickets for only $5 from the Hanford Chamber website, hanfordchamber.com.  Prices are $10 at the door. Reserve a whole table of eight to relax and enjoy the night with family and friends.

Saturday starts with a breakfast prepared and served by the Hanford Breakfast Lions Club from 8 to 9:30 a.m. at Civic Park. At 8 a.m., the Classic Transportation Exhibit will begin with pre-1972 vehicles. If you would like to exhibit your vehicle in the exhibit, please visit the Carnegie Museum of Kings County website to fill out their online application, carnegiemuseumofkingscounty.org

At 12:30 p.m. in front of the Veterans and Senior Building, the official ceremony hosted by the Hanford Rotary Club and the City of Hanford will take place.  The Hanford City Council will read the proclamation honoring our local veterans and the 130th anniversary of Hanford.

From 3 to 6:30 p.m., many local businesses in the downtown will participate in community open-house events with special hours, events and discounts at the following locations:

From 6:30 to 8:30 p.m., the Hanford Chamber of Commerce is hosting a beer garden in the Civic Courtyard with live entertainment by the Macey Blue Band.  Also, during this time, kids’ activities on the Civic lawn will take place.  At 8:45 p.m., the Hanford Parks and Community Services Department will hold a special Movies in the Park event, featuring the movie Cars III.