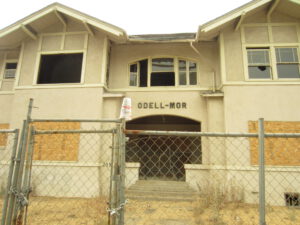 Known as the oldest apartment complex in Visalia, the Odell-Mor building has run out of time and options. A six month moratorium on the demolition of the building expires February 26.

Visalia’s Municipal Code does not allow the historical committee or city council to deny a demolition permit for buildings with a “background” designation and outside of the historic district such as the Odell-Mor.

“Background” is the lowest historical designation given to buildings on Visalia’s local register. Buildings with a designation of “focus” or “exceptional,” such as the Fox Theater or Darling Hotel, can be denied a demolition permit.

Cristobal Carrillo, associate planner for Visalia, said, “At present, our records show that no request for a demolition building permit has been submitted. It is presumed that the owner will submit sometime after the moratorium is lifted.”

The building was constructed in 1914 in the Bungalow architectural style, with features such as raised entry porch, roofs with wide overhangs, and exposed rafters and open gabled roofs.

It was considered the “nicest place in Visalia” when it opened according to the late Jane Higgins Nash, whose parents were the first occupants.

A spokesperson for the building’s owner and a member of the family, Arun Toor, said that the building has become such a burden that they have not yet made plans for the future of the property. The Toors initially submitted a plan for a 14-unit family complex to the Site Plan Review Committee in 2019. The project was given a “resubmit” by the committee, and nothing has been submitted since that time.

“Right now we have to put new boarding up every day,” said Toor.

He said that every night transients pull the boards off the derelict building, and every morning Visalia Code Enforcement is there warning the family to secure the building or face penalties.

Steps taken during the moratorium to save the Odell-Mor

During Visalia City Council’s February 16 meeting, Carrillo updated the council on measures to save the building.

Also in September, HPAC formed a subcommittee comprised of HPAC members Walter Deissler, Michael Kreps, and Jay Hohlbauch to meet with the Toors to discuss the possibility of relocating the building to a vacant site within the Historic District.

Dinuba House Movers conducted a site evaluation and provided an estimate for the building’s relocation.  The company stated that it would cost approximately $150,000 to relocate the building, notwithstanding separate fees from other agencies for the removal of obstacles (i.e., electrical wires, tree trimming, etc.).

The Building Safety Division staff determined that the Odell-Mor would likely withstand relocation but at a significant cost and effort.

On December 1, 2020, the subcommittee sent letters to property owners of two vacant sites located on the southeast and northwest corners of N. Encina Street and W. Murray Avenue. The letters requested a meeting with the property owners to discuss the possibility of relocating the Odell-Mor building to one of these sites. However, there was no significant action following initial discussions.

In January of this year HPAC concluded that finding an alternative solution to the demolition of the Odell-Mor building may not be feasible before the end of the moratorium. HPAC opted to draft an advisory document for staff which would contain recommendations to apply architectural elements of the Odell-Mor Building to future development on the subject site.

The intent of the document is to encourage future development to include architectural elements that pay homage to the Odell-Mor building.

Blame to spread around


Council Member Greg Collins didn’t mince words when he expressed his dissatisfaction with the imminent demolition of the Odell-Mor building.

“We should have been more proactive on that matter in terms of trying to save that particular building. It’s just a shame, really. We can blame us, or blame the staff, or blame the committee, but if you are going to be on a historical committee you need to be more aggressive in terms of ensuring that we don’t lose some of our wonderful historical buildings.”

Carrillo responded that the current city ordinance does not provide the committee with the appropriate jurisdiction or power to preserve historic buildings.

“They were pretty dismayed they could not deny the demolition request,” said Carrillo. He said the Odell-Mor building shined a light on what needs to be changed with the ordinance.

Collins added, “I’d really like to get the property owners in here and have them look the council in the face and explain what transpired, because it was my understanding the building was gutted before they realized it would be too expensive to restore and now it’s going to b demolished.”

Mayor Steve Nelsen regretted the committee allowed a six month moratorium without any result because he said that “transients just made it their hotel and it became a headache for the downtown.”

Council Member Phil Cox said that he spoke with Visalia’s Code Enforcement and they agreed that there is nothing you can do “if you have a property owner who is going to go in and do work after-hours or just go in and do work without permits and literally make the building unstable, unfit to stand. And that is kind of what happened.”

“I don’t know if that building can be saved,” said Cox

Since the August 26, 2020 Historic Preservation Advisory Committee (HPAC) meeting, the committee has embarked on a project to reevaluate building classifications to ensure that structures containing historic or aesthetic value are preserved to the fullest extent allowed by the Historic Preservation Ordinance.

Carrillo said that volunteers will be tasked with walking neighborhoods in which Local Register sites are located, conducting detailed evaluations of structures, and providing classification recommendations for discussion by the HPAC. He said that work will be labor intensive, requiring many hours of committee and staff time.

Though their project has been delayed by COVID, he said that surveys of each Local Register site will likely occur later this year.

Carrillo said the committee needs to re-evaluate designations of historic buildings to ensure that in the future HPAC has more say over if a building can be demolished.

4 thoughts on “Odell-Mor building to be demolished”