Even though TPCD Trustee Xavier Avila called the report a “big nothing burger,” emotions ran high at its October 22 meeting as arguments irrupted and Leonor Castaneda, the district’s manager, called the police twice to escort attendees out of the meeting.

The Grand Jury initiated an investigation because it received several citizen complaints “alleging various violations by the TPCD Board of Trustees.”

The Grand Jury report cited, among other issues, the district’s difficulty in conforming to the Brown Act, irregularities in finances and providing trustees with requested information, including complete board packets. The report suggested that the Tulare County Board of Supervisors (TCBOS) should have provided more oversight of the district. The report was also critical of the Facebook page Caring Cause.

Concerning its finances, the Grand Jury report stated that, “Office staff was using antiquated bookkeeping practices which led to inaccurate and lost payroll documents as well as endowment fund practices not being followed for several years. Payroll was done by averaging hours rather than hours worked.”

Its recommendation was for the district to conduct an independent forensic audit covering the last five years. The report also told the district the transfer of endowment funds needs to be made on a more regular basis. Health and Safety Code 9065 (f) requires the interest from the Endowment Care Fund be deposited in an Endowment Income Fund and be spent solely for the care of the cemeteries.

Trustees Vicki Gilson and Alberto Aguilar agreed with the Grand Jury’s findings. They have complained about inaccuracies in the payroll. They have also pointed out that contractors are being hired to do work at the North Cemetery without soliciting bids and then approving expensive contracts without the approval by the board.

Aguilar has submitted documents that prove that Castaneda has not been compensating the district employees based on the actual number of hours worked. He mailed a letter on October 8 to Tulare County District Attorney Tim Ward and delivered a copy to the TCBOS that contained several exhibits exposing financial irregularities concerning the district.

“I have requested charges be filed against Leonor Castaneda, Xavier Avila and Stephen Presant. A copy of my letter was also sent to Xavier Bacerra, State Attorney General,” he said.

Presant has said that the district changed procedures in 2018 to paying the employees for the hours worked instead of an average over two weeks. “No employee was cheated,” he said.

When Avila complained during the October 22 meeting that Aguilar had no proof that Castaneda was incorrectly calculating employees’ pay he produced his documents.

Avila opposed a forensic audit, and the district’s draft response to the TC Grand Jury echoed his sentiments. “A forensic audit is an examination of an organizations [sic] financial records to derive evidence which can be used in a court of law or legal proceeding. There is no evidence of any financial irregularity to justify the large cost of hiring a forensic audit specialist,” said the letter.

The Grand Jury report also was critical that “information contained in the board packets are frequently incomplete and not all members are provided information to which they are entitled.” It recommended “a complete restructuring of TPCD’s policies, procedures and internal controls be implemented within the next 12 months.”

Often, Gilson and Aguilar raise items of concern on the agenda–upon which they have had difficulty securing placement–and they have to bring their concerns up during trustee comments. When two employees had been hired in June without the board’s approval they could not get the item on the agenda. In terms of getting important information, Aguilar has been unable to get the audit committee packet, employee payroll detail, or bank statements.

“The reason that I have had to hire an attorney is due to your on-going and continued refusal to provide me with all material data that I have requested and you have not provided,” Aguilar wrote to Present.

The district’s draft response agreed with the Grand Jury’s assessment. “The Tulare Public Cemetery District Board is committed to doing this and part of the action taken in January of this year was to properly staff the office to account for the workload required to meet board needs. It is felt this should alleviate this situation.”

Board of Supervisors should have intervened

The Grand Jury report criticized the TCBOS for neglecting to provide essential oversight to ensure that the public interest was served by the TPCD Trustees. “Despite much public attention focused on the dysfunctionality of the TPCD’s Board of Trustees, the TCBOS, has thus far declined to exercise its authority under the section of the CHSC 9026.”

The California Health and Safety Code (CHSC), enables a board of supervisors to intervene in such cases and to appoint itself to serve as the governing board of a district. The Grand Jury recommended that the TCBOS consider exercising its authority under the applicable sections of the CHSC 9026 with a view toward bringing the governance of the TPCD into compliance with generally accepted practices and state requirement.

The report went on to say, “They (the TCBOS) continue to reappoint trustees who have demonstrated an inability/unwillingness to adhere to accepted practices as they relate to conduct of Cemetery District board meetings.”

It certainly isn’t for a lack of information that the board of supervisors has declined to get involved. For many years now, TPCD board members and concerned Tulareans have complained to the TCBOS about the district. Many concerned citizens have sent dozens of emails and spoken during public comment at the TCBOS meetings. Trustees and members of the public have also met personally with Supervisor Pete Vander Poel to discuss the problems plaguing the cemetery.

Presant said it was difficult to respond to this particular item because the report gave no specifics on which trustees have not conducted themselves appropriately at board meetings or how they have not adhered to accepted practices. Presant said that he was considering asking the Grand Jury for clarification on this item.

In the TCBOS response to the Grand Jury it disagreed. A draft response states, “From all appearances, the District is in sound financial shape and the cemetery grounds have never looked better. In the view of the Board of Supervisors, this shows that the public interest is being served by the appointed Cemetery District board.”

The TCBOS response included, “Wholesale replacement of the appointed board, which is the only option available under the Health and Safety Code, is not warranted and would detract from the local control that is vital to the success of the District in meeting the needs of and being responsive to the community.”

The report said, “Caring Cause is a volunteer group, which is disruptive to Board meetings…Members of the group Caring Cause speak up in board meetings before they are recognized by the Chairman and interrupt speakers during public comment sessions.”

Caring Cause is a Facebook page created in 2017 to improve the cemetery grounds and the management of the district. Individuals who “friend” Caring Cause’s are not part of any formal group and are not necessarily supporters.

The founder of the Caring Cause page, Elaine Hollingsworth, attends several meetings a year and always speaks in turn and is respectful to the trustees. Presant agreed, and said that he personally didn’t have a specific person in mind when he read the Grand Jury’s criticism of Caring Cause. He did believe that some of the disruptive attendees were also supporters of Caring Cause.

Community activist Alex Gutierrez videos the TPCD meetings as a community service for all those who cannot attend and posts the videos on Caring Cause’s page. Gutierrez has frequently spoken out of turn or interrupted trustees but is attending the meetings as a private citizen, not as a member of any particular group. He feels it is his civic duty to speak up when public needs are being ignored. He feels that at times it is the peoples’ only resort to be heard.

Gutierrez felt it was hypocritical of the Grand Jury to criticize the TCBOS for not intervening but then accuse Caring Cause of being disruptive when attempting to improve the management of the cemetery.

Castaneda directed to call the police

Fireworks were flying before the meeting even started.

Before all the trustees had arrived, Presant asked Aguilar what he thought of the district’s response to the Grand Jury report. Aguilar told Presant that he thought the letter was terribly written and rife with inaccurate information.

According to Aguilar, County Counsel Mathew Pierce got very close to him and commenced to scowl and threaten him. Pierce claimed that Aguilar’s behavior was rude and unprofessional and that he was not going to allow it. Aguilar responded by telling him to back off and said that he had no authority over him.

Pierce then asked him, “Do you want me to leave?” and Aguilar responded, “There’s the door.”

When Pierce noticed that some members of the public were recording the confrontation on their phones he walked back to his seat. 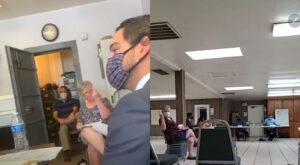 On witnessing this confrontation, Corina Lara protested and said loudly to Presant that Pierce should not be allowed to treat a trustee so disrespectfully. Lara had seen two pictures Linda Malloy, founder of the Cemetarians, flipping off a trustee and had also seen a video of her saying  f*** you to Aguilar.

Lara asked why Aguilar was chastised for respectfully expressing his opinion while Malloy was allowed to continue her vulgar behavior.

(Lara is an aunt of the young woman whose casket Castaneda and the groundskeepers jostled because of their inexperience in handling a casket. The family members were not permitted to be pallbearers because of COVID. Castaneda had threatened the family that it would be locked out of the cemetery if they called the office one more time requesting they be the pall bearers.)

Presant directed Castaneda to call the police to remove Lara from the meeting because she was being disruptive. Once the police came Lara asked if she could stay in order to speak during public comment and Presant gave her another chance.

The second incident started when Gutierrez chuckled after Avila said a forensic audit would cost $100,000 or more. Then Gutierrez continued to speak after Presant warned him he was being disruptive. Presant told Gutierrez to leave the meeting and Gutierrez refused. Presant then instructed Castaneda to call the police again.

The police arrived and escorted Gutierrez out of the meeting without incident.

Gutierrez felt the entire incident played out according to script and that Avila and Presant had the confrontation planned.

“They targeted me before the meeting,” he said

Presant has planned a tentative meeting the Monday before Thanksgiving to finalize the district’s response to the Grand Jury report. Responses to the report are required from both the TPCD and the TCBOS.

Their responses are due by December 9.