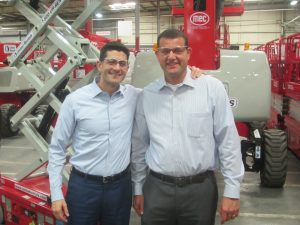 Ryan spoke in front of approximately 100 MEC employees, saying that the goal of the new tax bill was to revive manufacturing and that he has heard nothing but good news since the bill passed. He emphasized that if America does not have a strong manufacturing sector then it can’t be a strong country.

The old tax code was holding back manufacturers, he said; but, with the new code, manufacturers like MEC can write off the cost of equipment. That means they buy more equipment and then you hire more people to use that equipment. He stated that tax cuts to corporations would create a ripple effect through the economy — creating more jobs and improving the economy for everyone.

Millions of workers will see pay increases and improvements to their 401k plans and health benefits, Ryan said. He claimed a hundred million more dollars has already been invested in factories around the country which means more jobs.

MEC is on track to double its sales of aerial platforms in one year, Ryan added.

“That’s exactly what we were hoping to achieve when we rewrote the tax bill,” he said.

Valadao said that he was happy to see the Central Valley diversify. Agriculture is important, he said, but so is increasing the number of manufacturing jobs, which was happening in the Valley at MEC. 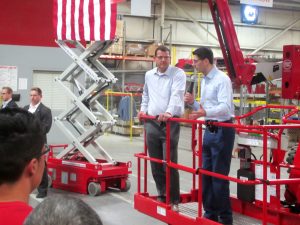 He also praised the tax bill, stating that the standard deduction was doubled — meaning that 95% of the people in the Central Valley just doubled their deductions. With more of their paycheck in their pocket, they can invest or spend, putting money back into the economy.

He was thrilled that a company right here in the Central Valley could be feeling the benefits so quickly of the new Republican tax bill, he said.

After Ryan’s talk with the employees, Valadao stayed for questions.

He was asked about the California State Water Commission’s decision to allocate such a small amount of funding to Temperance Dam.

Valadao said that he was frustrated with the governor, whose priority is High Speed Rail, he claimed. Commission members are appointed by the governor and approved by the State Senate.

“That’s why we have to send good people to Sacramento,” he said.

Valadao also said that he and Ryan have endorsed Congressman Kevin McCarthy for Speaker of the House after Ryan retires. McCarthy has not yet officially declared he is running.

Senator Marco Rubio recently criticized the new tax bill, and Valadao said he didn’t know where Rubio was coming from and added Rubio has since back tracked.

Valadao said believes that the tax bill was a great piece of legislation, especially in what it could provide to the Central Valley.