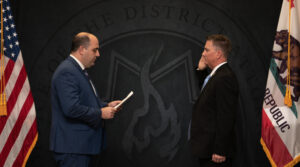 On December 28, Tim Ward was sworn in to his third full term as Tulare County
District Attorney. The oath of office was administered by Visalia Mayor Brian
Poochigian.

“I am again honored to lead the men and women of this office through what I believe are challenging times for prosecutors and law enforcement,” said Ward. “Where so many
legislative and societal movements stand solely with the accused, we must never forget
those who violence damages and whose fruits of hard work are torn away by criminal
conduct. It is our duty and our honor to stand ready for victims.”

One thought on “Tim Ward sworn into office”