This is part one of a two part series.

Tony Reid – a seasoned defense attorney and private detective turned author – says the former Tulare County District Attorney knowingly framed an innocent man for the murder of 13-year-old girl in 1975 to save his political career. 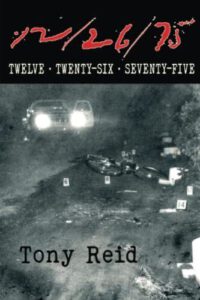 Reid’s new book, 12/26/75, details in minute detail the murder of 13-year-old Donna Jo Richmond in Exeter the day after Chrismas in 1975 and the eventual arrest and conviction of Oscar Clifton. That conviction, Reid says, was based on trumped up charges made to stick using false evidence and the intentional withholding of evidence that would have cleared Clifton’s name.

Clifton died in 2013 while incarcerated at the California Men’s Colony, a state prison located in San Luis Obispo.

Reid’s interest in the case began in 2016, catching his attention as he was researching a similar unsolved killing in Visalia that also happened in the mid-1970s. He soon gave his entire attention to the Richmond murder and what he said was an effort by Tulare County District Attorney Jay Powell to frame Clifton and assure his reelection by getting a conviction. He was aided in this alleged misdeed, Reid said, by Tulare County Sheriff Detective Robert Byrd.

Gathering the extensive background material Reid used to recreate the events of nearly half a century ago was a Herculean task, and Reid said the resulting book proves unequivocally that Clifton could not have killed Richmond.

“It took six years, so I hope it all makes sense,” he said.

While Clifton wasn’t convicted for Richmond’s murder until 1976, the events that would lead to him spending the rest of his life in prison began years earlier. Reid said Clifton originally clashed with the TCSO’s Byrd when Byrd was working as a union-buster for local ranchers and Clifton was operating a trucking company that sided with workers.

Clifton was convicted of an apparent rape that also may not have happened because of Byrd’s need for revenge, Reid said. The detective’s grudge against Clifton eventually caused Clifton to move his family out of the area for a decade. When he returned, Byrd picked up where he left off, eventually, according to Reid, fabricating the case against Clifton.

But Byrd didn’t work alone to put Clifton behind bars. Reid said he had the complete and willing support of Powell and his office to hide the bad investigation. Powell’s office even worked to substantiate the meritless case, Reid said, and he was able to put the story together in part because of Clifton’s own unceasing work to exonerate himself.

“After reading all of Oscar’s writings on this, the question became how was he convicted,” Reid said.

The answer was intentional prosecutorial misconduct by Powell, he said.

Although Clifton died in prison in 2013, his family still hopes to have his name cleared. Reid, too, would like to see that happen, and he volunteered to aid the attorney general’s office in investigating the case. Instead, the AG ordered the Tulare County DA to produce a conviction integrity review (CIR) to reaffirm proper conduct by the DA’s office during Clifton’s prosecution.

A CIR, according to Reid, is intended to review cases where the possibility of a false conviction exists. The CIR performed by the Ward’s office in the Clifton case is woefully inadequate, Reid said.

“A CIR should involve the defense counsel. That’s what was truly 100 percent missing from this report,” he said.

Importantly, a CIR is an official proceeding of the court, and Reid believes the CIR, if performed correctly, would clear Clifton of any wrongdoing.

Ward, Reid said, is aware the CIR is inadequate and is supporting it anyway.

“In terms of the law, we’re talking about a knowing misrepresentation. ‘I know this isn’t true, but I’m going to say it anyway,'” Reid said. “I don’t know why the DA’s office is making these statements when they know they are not true.”