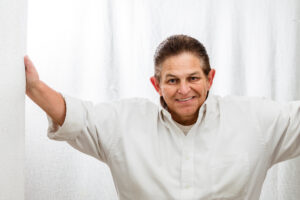 After a broadcasting career spanning more than half a century, Kent ‘Hop’ Hopper, whose deep and iconic voice has haunted the invisible airwaves here in the San Joaquin Valley has signed off after his final broadcast.

The last edition of Hopper in the Morning – the Pulse of the Valley aired Wednesday, November 30. A replay is available at talktohopper.com.

“I’m a little bit sad, and a whole lot glad,” Hop said following his final show. “That’s the best I can say.”

He’s said a lot since taking to the ether around 1970 with his first full-time DJ gig at radio station KNGS in Hanford, then a staple source of country music. The art deco building that housed it, still home to a radio station, sits at the eastern edge of Highway 198 just outside of town. That building, like Hop, changed its format many times over the years. And Hop, like that building, has lasted through the decades.

But all good things must come to an end.

“Today was the last day,” Hop said. “We had Mrs. H in. We did just fun stuff with the staff in here, with me in the studio.”

No Plans, No Schedule

What’s next for Hop? Who knows? He doesn’t.

There is one thing he is definitely going to pursue now that he’s got the time, his music. The 73-year-old fronted a rollicking rock-n-roll band once upon a time. Now, he wants to give his pipes a workout again.

Besides, he can’t just sit around.

“I was just going to not do anything,” he said. “Then I thought this might be a time to get into music. I want to sing. Then I want to write some songs.”

Hop and Mrs. H also plan to take to the open road to visit their grandchildren around the country.

“I’m going to try to save some pennies and go see them,” he said.

The couple has six children and a passel of grandchildren.

Kent Hopper is a native son through and through. Born in Shafter in Kern County in 1950, his early days were spent in relative poverty. His parents were determined to rise beyond a lifetime in the fields.

“My mom and dad were poorer folks back in the day,” Hop said. “They worked in the cotton fields, and Dad trying to go to law school at the same time.”

His father succeeded, and once he was on the bar, the family moved to Orange Cove in southern Fresno County. They moved to Fresno after Hop finished the eighth grade, when his father – the Hon. George Hopper of the 5th District Court of Appeals – was appointed to the bench.

Hop clerked in his father’s law practice and studied music and music theory in college, but what he really wanted was a career in entertainment. The law, he said, was borning. So, he struck out on his own. His father was, of course, concerned for his son’s future.

His father also told Hop that if he was set on becoming an entertainer, then he should become the best one around. The advice stuck with Hop for the rest of his life.

In the early days of radio broadcasting, DJs were required to hold a license from the FCC, so Hop moved to Los Angeles to attend the Don Martin School of Radio and TV Arts and Sciences. He was also working on his fledgling music career, playing guitar and singing.

In those days, would-be radio personalities sent out recordings, demo tapes, in hopes of landing a job, and Hop caught a break from Bobby Martin at KMKA.

“He gave me a weekend job to get me in the door,” Hop said. “I learned a lot there.”

He eventually ended up as a DJ on KMJS in Hanford, another county music station. The station was owned by country music star Roger Miller – best known for his song King of the Road – and many of the top stars of that genre passed through Hopper’s studio.

The Kent Hopper Band – formed while Hop was working in Modesto at KMIX and KBRT – would eventually perform as an opening act for Williams, a peak moment of his musical career. The band opened for other notable acts, including the Bellamy Brothers.

Eventually, Hop and his family made their way to Visalia, where he worked as a DJ for KSEQ and then took his last strictly musical job at KIOO. When he’d entered the radio world, DJs were a breed of celebrity in their own right – “Why was the band named after me? Because I had some notoriety.” – but that changed as radio station ownership consolidated and formats became far more standardized.

“The older I got, the more I wanted to get into news and information,” he said. “I did news bits before and enjoyed it.”

At the time he decided to make a transition, the same company he worked for also owned KTIP, a news station broadcasting on an AM frequency out of Porterville. Hop made the move, and when the station changed ownership, he became its general manager.

Man of the Year

Following this transition, Hop said, was when he realized radio could be more than just entertainment and information. It could be a platform for change.

“That’s when I found out I can really help people from behind the microphone,” he  said. “People were coming to the station all the time, I’m talking hundreds of opportunities to help people.”

Among other efforts, Hop went on to found the Turkey Transit Singers, a group of local notables who provided Thanksgiving meals to those in need. He and the other volunteers, working with Visalia Emergency Aid, used the station’s remote vehicle to make the deliveries the first year of the giveaway, and it was a toss-up which was the better feeling: feeding the hungry or just being a bit silly.

“We had hundreds of them (turkeys) sliding around,” Hop said. “They were everywhere in the RV. It was a lot of fun.”

The singing came in when the group was soliciting funds to pay for their efforts.

“We’d go everywhere they’d have us. Rotary clubs, things like that,” Hop said. “We’d sing turkey songs and pass the hat around.”

Thanksgiving caroling was one of many efforts to help the less fortunate Hopper fronted over the years.

“When it came to feeding people, my ears perked up. We weren’t rich growing up,” he said. “It did my heart good.”

Hop wasn’t the only one benefiting, and the community noticed. He was given a Hometown Hero Award in Visalia in the 1990s, and just this year he was named Porterville’s man of the year.

“I tried to make a difference for many years,” Hopper said. “I think I did. Never enough.”

All About the Experience

While broadcasting was his living, there was a deeper satisfaction that kept him in the industry for a lifetime.

“Going places and talking to people,” Hop said. “That’s the bottom line for me. It was fun for me. I enjoyed it. It kept me and my family alive for many years.”

Some of those people he met along his career path would eventually help him save that career when an unexpected change in ownership at KTIP saw Hop turned out from the station. He was lost with the end of his career and retirement in sight. The ax fell in 2018, but Hop’s family and friends rallied to face the crisis.

“When we lost our job at the radio station in Porterville, I didn’t know what to do,” he said.

His son suggested he move his show online. While the move proved a massive success, with the Hopper in the Morning Show airing 906 episodes through the final broadcast, that success was far from certain at the start.

Advice and money poured in, critical support from those Hop had helped or befriended over the course of his long career.

“I was so grateful to the people that are out there,” he said.

It might also be time to air his real opinions on the issues he’s reported on over the years.

As the manager at KTIP, Hopper felt he had a responsibility to provide the broadest perspective possible on the issues he and his team covered. That often meant keeping his mouth shut, as his own feelings were often at odds with those he invited on his show. He kept that standard when he moved online, maintaining the professional detachment expected of journalists.

If he ever goes back to broadcasting, then he won’t hold back, he said.

“If I go on the air again, I’ll talk about what I think about this, that or the other,” Hop said. “When the political winds blow…”