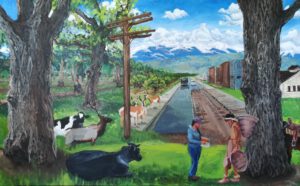 Downtown Visalia Kiwanis, founded in1922, is commemorating its 100th anniversary by donating a mural to Downtown Visalia. The mural will be painted on the Senior Center exterior wall facing Locust Street at the corner of Oak Avenue. Muralist Stevi Daniels designed it to reflect Visalia&#39;s past and present.

The club will celebrate the anniversary on Tuesday, November 22nd at noon at 210 Cafe. Local historian Terry Ommen will be the guest speaker.

Kiwanis International was founded in 1915 in Detroit, Michigan. The name “Kiwanis” was coined from an American Indian expression which means, “We trade.” In 1920, the
motto of Kiwanis became “We Build”until 2005, when it changed to “Serving the children of the world.”

If you are interested in volunteering in your community, making friends, and opportunities for leadership, please contact a Kiwanis club near you.