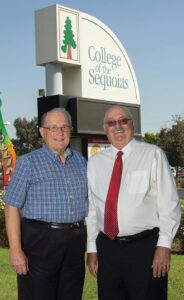 A university center is coming to College of the Sequoias in Visalia, now that Measure C passed in the recent Tulare County election.

The university center will be located on Mooney Blvd behind Foster’s Freeze and an adjacent strip mall. Existing apartment buildings behind the area will be razed and turned into the two-story university center, as an addition to the College of the Sequoias’ campus, plus a student union center.

“I am very excited for it, and it will be such a plus for the community and the town – obviously for the students it is going to be terrific,” said Greg Sherman.

Greg Sherman retained his seat on the College of Sequoia’s Board of Trustees, winning re-election over his opponent, Niessen Foster.

Sherman has served sixteen years on the Board, won five elections, and this election was the second time he faced an opponent.

“One of the interesting things about running is the public gets to hear what a trustee does. A lot of people don’t know that we are elected like a City Council member,” said Greg Sherman.

The College of the Sequoias Board of Trustees is composed of five members, split into five districts or wards that are elected with four-year terms. The Board of Trustees approves spending, hiring of staff, curriculum, establishing policies for the district, etc.

The hiring of the college superintendent and the president is also fulfilled by the Board of Trustees.

“We do a lot of things-we pretty much approve anything. We had to approve measure C before it became a reality,” Greg Sherman.

The Board of Trustees had to promote measure C once it got on the ballot. Measure C is a 95 million bond project created by the College of the Sequoias to fund a university center. The measure will raise property taxes by $13 for every $100,000 of appraised value per parcel on residents in Tulare County. Measure C received 55.0% of the vote.

An oversight committee will supervise how the money is spent and has already been appointed by the College of the Sequoias Board of Trustees.

“We have a bond oversight committee, so the money is spent the way it is supposed to be spent. We did this at our last meeting we approved the committee,” said Greg Sherman.

Sherman was born in Denver and was raised on a farm. Since then, he has lived in Visalia since 1971. Sherman is married; has two children, and five grandchildren. Prior to serving on the Board of Trustees, he served on the College of the Sequoias Foundation for 10 years.

“I feel very blessed and thankful,” said Greg Sherman in response to his re-election.

Measure C will impact the community surrounding the College of the Sequoias. The university center will offer Tulare County residents an alternative to Fresno State when obtaining a four year degree.

Residents living in the apartments owned by the college will be forced to move now that the University center will take their place.

“Hopefully they will find another place to live. They will have plenty of time before [moving] because we have to get approvals and follow rules to move forward,” Sherman.

“I was talking to someone at church and her daughter is so excited about measure C. She will be able to attend and get her four-year degree right here in Visalia,” said Sherman.

The list of degrees included at the university center is criminology, nursing, teaching, public safety, agriculture, and others.

Students will be able to get an associate degree from the College of the Sequoias with the potential of transferring to the university center to receive a four-year degree. The center is projected to start within a year.