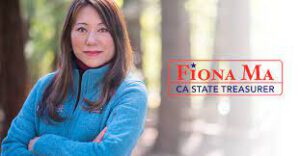 California State Treasurer Fiona Ma’s campaign for re-election today announced the endorsement of the California Farm Bureau. The endorsement speaks to Treasurer Ma’s long history of bridging divides across California from urban San Francisco to the rural Central Valley and beyond.

“When I was first elected to the Assembly and appointed to the Agriculture Committee, I made it my mission as a Democrat from San Francisco to learn everything I could about California’s agricultural economy,” said State Treasurer Ma. “Almost 15 years later, I am proud to have visited over 150 family farmers across the state, where I listened, learned and took action. After these many years of work on their behalf, it is a tremendous honor to receive the support from the California Farm Bureau, representing over 31,000 farmers in California.”

“From her time in the Assembly, when she fought to save the historic Cow Palace agricultural venue, Fiona Ma has shown her understanding of agriculture’s vital contributions to California,” said Farm Bureau President Jamie Johansson. “As Treasurer, she has been an advocate for protecting our precious agricultural spaces by creating incentives to keep hard-working farmers and ranchers on their lands. She is dedicated to expanding local farmers markets and to supporting our farm producers who deliver fresh, healthy foods across America and the world.”

Lovingly nicknamed “The Urban Cowgirl,” Fiona spent her entire life in two urban areas (New York’s Long Island and the City and County of San Francisco), with little exposure to agriculture prior to serving on the Asm. Agriculture Committee. She’s toured everything from nurseries and avocado orchards in San Diego; cattle at Harris Ranch and rangelands in Glenn, Santa Barbara, and Alameda Counties; strawberries and leafy greens on the Central Coast; stone fruits in Fresno County; figs, rice and dried plums in the Sacramento Valley, and a long list of others.

By developing a strong interest in agriculture and identifying a critical connection between farms and cities, Fiona became one of the strongest voices in the Legislature on agriculture issues. She authored ACR 42, “Eat Local, Buy California Grown on Sundays,” which strives to help local businesses while enhancing jobs and the economy. In 2009, Fiona authored AB 606, which created the California Blueberry Commission to help promote California-grown blueberries and create jobs in the state.

As a Certified Public Accountant, Fiona has been a leading advocate in her caucus to restore and preserve the Williamson Act. She has also used her taxation knowledge by writing a letter to Congress urging the passage of legislation to extend the estate tax deferral for family farming operations. Fiona also invested significant time working with the Little Hoover Commission and others to find viable solutions to save our state fairgrounds from financial insolvency and preserve these agricultural resources for future generations.

Fiona is a Democrat up for reelection this November 2022.

Fiona Ma is California’s 34th State Treasurer. She was elected on November 6, 2018 with more votes than any other candidate for treasurer in the state’s history. She is the first woman of color and the first woman CPA elected to the position. California is the world’s fifth-largest economy and Treasurer Ma is the state’s primary banker.