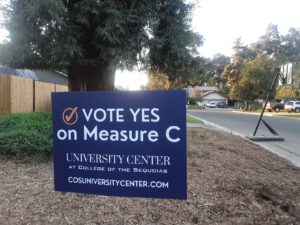 Tulare County has an opportunity to obtain a 4-year university and Measure C could make that possible.

Measure C, if passed November 8, would levy a parcel tax of $13 per $100,000 of appraised value of property owners in the district.

Students and parents at the College of the Sequoias (COS) have their own opinions about this measure.

“I would love a university! So, my daughter isn’t driving an hour away,” said Maria Rivera.

Maria Rivera is a single parent, and her daughter, Elizabeth Rivera attends COS, majoring in Geology. Rivera is pro-Measure C and stresses her support so impoverished families can worry less about sending their children to father away colleges.

The Total number of students that enroll in Fresno State from Tulare, Kings, and Nothern Kern County is 5,100. This measure would allow students to remain in Tulare County said Lauren Fishback, director of public relations and marketing at COS.

Measure C would allow the College of the Sequoias to offer a variety of bachelor’s and master’s programs by expanding its university center. According to the Tulare County Registrar of Voters information the measure will pass if 55% of participants vote “yes”.

“It would open up opportunities. People don’t have to drive as far and can save money,” said COS student, Chloe Meza.

“For one thing the traffic gets bad in the morning, and it would make it worse. [And], it forces people to stay here,” said Cooper.

Tulare County is the second largest county in California out of 58 that does not have a 4-year university. Students that have graduated, and used programs from the already existing University center, hosted by Fresno state between 2017-2022 are 3,739.

“[Students] don’t have the added pressure of the commute, to find the money for rent, and it launches them into life a bit differently– without them having to extend all their resources,” said Fishback.

According to Fishback , if Measure C passes the COS District Board will spend 95 million to work on projects relating to building facilities, updating technology, and establishing a student center. The University Center will be two stories and located behind Foster Freeze on Mooney Blvd on land already owned by the college. Measure C will raise the property taxes by $13 dollars per $100,000 dollars of property within the district.

COS Student Enoel Torres stated,” I think it’s cool, and the money is going towards a good cause. They should impose the tax it’s not that much.”

The College of the Sequoias hopes to start this plan within the next two or three years if the measure passes. Some of the programs that will be offered include business, integrated teacher programs, nursing, criminology, and public safety.

Measure C is on the ballot for the general election in Tulare County on November 8, 2022.

6 thoughts on “COS students, parents, speak out in favor of Measure C”