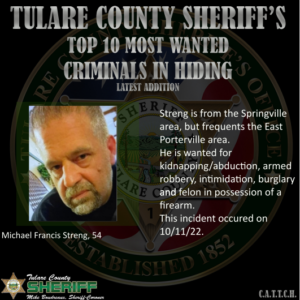 Deputies learned two women with an 8-month-old baby came home and found a man armed with a gun in their home. The suspect held the victims at gunpoint and zip tied the women’s hands. During the next three hours, the suspect stole money and their phones, and then fled the scene. None of the victims were injured.

TCSO Detectives took over the investigation. Detectives identified 54-year-old Michael Francis Streng, of Porterville, as the suspect in this case.

Detectives are asking for the public’s help in locating Streng. He is 6-foot, 3-inches tall, and weighs approximately 250 pounds. He has gray hair and brown eyes. Streng is believed to be armed and should be considered dangerous.

This is still an active investigation. Anyone with information is encouraged to contact Detective Reymundo or Sergeant Demecio Holguin at (559) 733-6218 or anonymously by calling or texting (559) 725-4194 or through email at [email protected]