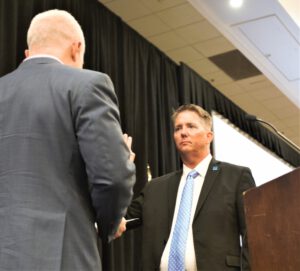 “It has been my distinct privilege to have served on the CDAA board and today being sworn-in as president. CDAA a remarkable association that prepares prosecutors to better serve their communities and the victims they fight for in courtrooms across California. I look forward to working with prosecutors, investigators, advocates and staff to better our system of justice and give voice to those impacted by crime,” Ward said.

The mission of CDAA is to promote justice by enhancing prosecutorial excellence. To that end, CDAA is the source of continuing legal education and legislative advocacy for its membership. In addition to offering seminars, publications, and extensive online tools, CDAA serves as a forum for the exchange of information and innovation in the criminal justice field. In the area of advocacy, CDAA reviews 200-400 bills annually that affect public safety, criminal justice, prosecutors, and crime victims, and advocates on behalf of prosecutors on state-budget-related issues.

Ward is the first representative of Tulare County to hold the position within the Association.