The images are in and they’re even better than one could imagine. 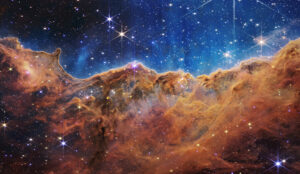 NASA’s James Webb Space Telescope began transmitting the clearest, infrared images from the deepest parts of the universe this week. The images will be available in large format at a gallery exhibition Friday, July 15 at TCOE’s Planetarium & Science Center.

NASA Solar System Ambassador Craig Alameda will also be on hand to answer questions. The exhibition is included with the purchase of admission to the July 15 planetarium show Two Small Pieces of Glass: The Amazing Telescope.

Webb is NASA’s largest and most powerful space science telescope ever constructed. Over a million miles from Earth, Webb will directly observe a part of space and time never seen before. It will gaze into the period when the very first stars and galaxies formed, over 13.5 billion years ago. Scientists will use Webb to study planets and other bodies in our solar system to determine their origin and evolution, and compare them with exoplanets, planets that orbit other stars. Webb will also observe exoplanets located in their stars’ habitable zones, the regions where a planet could harbor liquid water on its surface, and can determine if and where signatures of habitability may be present.

Visitors to the Planetarium can learn about the history and science behind telescopes in a showing of Two Small Pieces of Glass: The Amazing Telescope, and get hands-on with science through activities and crafts for curious scientists of all ages. Doors to the Planetarium will open one hour before show time for the gallery exhibition and activities. For ticket prices and show times for Two Small Pieces of Glass, visit tcoe.org/Planetarium/PublicShows.

~ This landscape of “mountains” and “valleys” speckled with glittering stars is actually the edge of a nearby, young, star-forming region called NGC 3324 in the Carina Nebula. Captured in infrared light by NASA’s new James Webb Space Telescope, this image reveals for the first time previously invisible areas of star birth. Credit: NASA, ESA, CSA, and STScI