A press release from the City of Tulare 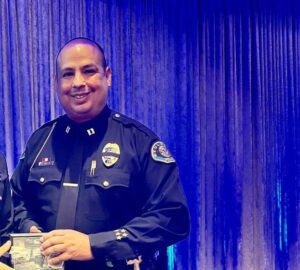 On Tuesday, City Manager Marc Mondell announced that he has appointed Tulare Police Captain Fred Ynclan to serve as the next Police Chief, filling the position vacated by the retirement of Chief Wes Hensley.

The incoming Police Chief will be responsible for continuing the community’s high level of policing services, growing successful public safety outreach programs, and at the same time, providing an important perspective on the City’s management team.

Fred Ynclan brings over 25 years of experience to the position of Police Chief.  Fred was born in Tulare and raised in Tipton. He graduated from Tulare Union High School and immediately enlisted in the US Marine Corps, where he participated in Operations Desert Shield and Desert Storm as a Combat Engineer.  At the conclusion of his enlistment he returned to the Tulare area and attended the Tulare-Kings Police Academy, Fred started his law enforcement career with the Lindsay Police Department. He worked in Lindsay for 4 years and came to the Tulare Police Department in 2001.

Once at the Tulare Police Department Fred worked various assignments such as FTO, SWAT, K9, Narcotics and Detectives. In 2013 he was awarded the Tulare Police Department’s Officer of the Year. As a captain since 2015, Fred Ynclan has been a commander in the Administration, Patrol and Investigations divisions.  Fred has attended the Los Angeles Police Department West Point Leadership Academy and holds a Bachelor’s Degree in Criminal Justice Administration. He has also completed the California Police Chief Association’s Executive Development course in Spring, 2022.

He was a founding member of the Tulare Corps Young Marines and attended Leadership Tulare in 2007 and continues to serve the community as a Noon Kiwanian and various other community events in the city.

Mayor Dennis Mederos, a panelist for the Police Chief interviews, stated, “Fred Ynclan is an excellent match for the City of Tulare.  His deep understanding of all aspects of police operations and management, coupled with his proven leadership record and deep commitment to building community dialogue, will be important assets to our City for years to come.”

Fred currently resides with his family in Tulare and is eager to serve his community.  He will be begin his tenure as Police Chief for the City of Tulare on July 2, 2022.  The City welcomes Fred to his new position.