Community leaders and supporters will be joining Parra in visiting communities in Senate District 16 in a five-day caravan parade. 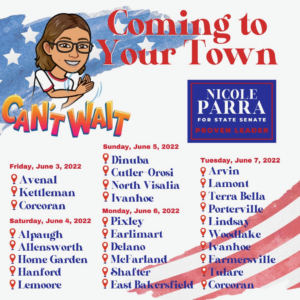 You are formally invited to come support Nicole Parra for State Senate during a five-day GOTV (Get Out The Vote) caravan parade in communities throughout Senate District 16.  A car caravan is a parade of cars that drives through a strategically selected route. Each car in the caravan will be displaying GOTV messaging to raise awareness about voting in the primary elections.

Nicole Parra was born and raised in Bakersfield and she has lived in Fresno, Kings, and Tulare counties.  Parra’s values are the values of the Valley: hard work, self reliance, sacrifice, and community service. Recognized for her work leading a team to create the Federal Interagency Task Force in the Central Valley and the San Joaquin Valley Partnership, Governor Schwarzenegger appointed Parra to a high-level position within the Business, Transportation, and Housing Agency, based out of Fresno.  A year later, Parra started her own company NMP Consulting. Her company provided clients in the Central Valley, strategic planning, government relations, and communication services.

Parra has been recognized over the years by her community and academic institutions including the Mark Bingham Award for Excellence in Achievement by U.C. Berkeley in 2009 and 2017, and Parra was inducted into the first class of the Highland High School Alumni Hall of Fame.

In 2014, Parra was hired as an Adjunct Professor at California State University Bakersfield where she was an instructor for American Government and Politics course and a Civil Liberties course for two years.  In 2016, Parra was hired as the campaign manager for the Measure J Campaign for the Kern Community College District, a $500M school bond that passed with a 2/3 vote.  Bakersfield College received $415M for various improvement and construction projects across the campus including a Veterans Resource Center, a Campus Center, and updates to Memorial Stadium.