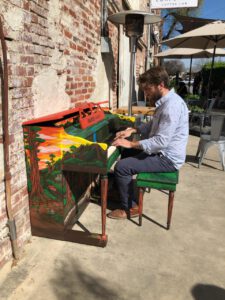 Grace Note Music Studio and the Visalia Arts Consortium have begun a new musical project for residents and tourists in Visalia.

Since March, Visalians can find two beautifully painted pianos located at Component Coffee Lab and Barrelhouse Brewing. Grace Note’s founder, Andrew Kenefick, said the project is designed to give the public access to the art of music in the form of donating hand-painted pianos to businesses.

Kenefick’s priority has been placing the pianos in open spaces to the public. Although the Barrel House is enclosed, Kenefick says it has a very open feel.

The project was something Kenefick had always wanted to do and had been in talks years prior with the Arts Consortium.

“Public music and public art go naturally together,” he said.

But, with the COVID-19 pandemic, all plans were paused between the two groups. Now Grace Note and the Arts Consortium plan to make the Visalia Piano Project a long-term public art installation.

“I mean, how awesome is it that you can grab a coffee at one of your favorite places and sit down to either play piano yourself or listen to someone else? It brings casual music making into a public space for everyone,” said Kenefick.

He stated that he felt the project was “super cool” and that he thought those living in the town would be receptive to the idea.

“No one ever really realizes it, especially if you grew up here, but there’s a lot of tourism around this area,” Kenefick said, “We have so much tourism that comes through this town for the Sequoias and this is a little quirky thing for vacationers to remember about their stay here.”

While there are only two pianos available right now, Kenefick noted that there are three more pianos currently being painted in hopes the project will expand.

Kenefick hopes to work with the City of Visalia in the future to place more pianos. Several possibilities for placement would be Garden Plaza on Main Street, the Convention Center, library, or Recreation Park.

Though other cities such as Davis and Portland have public pianos, Kenefick came up with the idea when he saw a baby grand in a public space in San Francisco. Musicians can play their guitars on street corners or cafes, why not pianos, he thought.

Kenefick put a piano in his front courtyard during the shutdown and played. Playing outdoors inspired him to offer the opportunity to everyone.

“We have tennis courts, basketball courts and skate parks, why not make music publicly accessible?”