It was cold the morning of December 29, 2021. It certainly wasn’t the coldest Christmas week the South Valley has seen, with light rains falling on and off that day. The chill could have been much worse, and for Tulare dairywoman Janie DeRaadt, it was.

It’s a day that will be frozen in time for her and her husband.

The DeRaadts were facing the worst possible scenario for a dairy that has been in the hands of the same family in Tulare County for generations, one that dozens of other small dairies are staring in the eye: They were closing down the ranch permanently; their herd was heading east without them.

“We are slowly going out of business,” DeRaadt said. “We just sent 80 cows to New Mexico.” 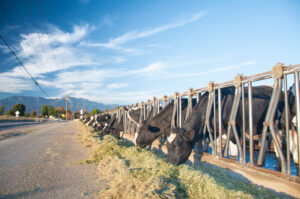 Those 80 head were the last of their cattle. The dairy’s gone. It’s far from the only family-owned milking concern that’s already met the same fate or will soon face it. DeRaadt says she knows of at least 20 other dairies that have operated for decades in and around Tulare County that are going broke.

“I heard the same story,” said Tulare County Ag Commissioner Tom Tucker. “All of our dairymen and -women have just been having a terrible time. The majority of it has to do with rising costs.”

There are other factors at play as well. While the market for raw milk is good, the margins are getting smaller, as fuel prices continue to skyrocket and the cost of fodder, which was already rising, has followed suit. And, the labor market has changed, with competent workers willing to stay on the job are becoming harder and harder to find.

“Guys just don’t stick around anymore,” DeRaadt said. “Because of all the money out there, no one wants to work.”

The programs intended to keep workers afloat while many businesses shuttered temporarily or closed altogether during COVID-19 had an unintended effect, say those in the industry. Workers in a hard-scrabble industry sought less demanding work.

All Ag Is Hurting

These rising costs aren’t isolated to the dairy industry, but with the worst drought in recorded history now underway in the western US, dairy ranchers are taking yet another big hit that’s more unique to milkers. As wells go dry and more water-saving restrictions are put into place, the arid conditions are adding to their woes by making it difficult to grow their own feed.

“They just had rising costs every single year, just like every other grower,” said Tucker. “Now, with water getting to be such a big deal, they’re faced with fallowing land they need to grow their silage. It’s just an impossible situation.”

Those who do have water are often using it to diversify, adding nut crops like walnuts, pistachios and especially almonds to supplement their income. That too has its negative impact on dairies. Ranchers who have gone that route, if they choose to grow silage, the corn and the wheat is harvested from fields farther away, a distance that adds to fuel expenses.

Ironically, those who added nut crops are now faced with additional woes.

There is one silver lining for them, as almond hulls are used as cattle fodder and are in demand.

Those ranchers who can’t afford to grow their own silage are forced to turn elsewhere.

“They also have to haul in corn from the Midwest here,” said Arnel Koster, a dairyman turned broker specializing in the sale of dairies and herds for Schuil & Associates Real Estate. “That’s why you see so many Western Milling and J.D. Heiskell trucks on the highway. They can haul in 80- to 100-unit trains. That’s all scaled up over the last 30 years because of large dairies in the Valley.”

The Tyranny of Economy of Scale

High demand has driven costs ever higher. The price of wet silage has doubled recently, going from $55 to around $110 a ton for feed, Koster says, and shipping costs have gone up too. For small dairies, those that lack the buying power of the larger concerns, these high costs are a force multiplier working against them.

“It’s hard, but it’s really especially hard for anyone milking less than 1,000 cows. They don’t have the volume,” said Koster. “They have to buy their loads one at a time. The bigger dairies are buying 30 at a time.”

Not all dairies are completely crippled when it comes to home-growing their fodder or have been forced to look to the east for expensive feed. But for those that are growing silage, the crops they produce these days yield less than those in days when more water fell from California’s ever-blue skies, and that means another hit for the dairy industry.

“Rather than the dairies around here making enough feed for themselves and to sell, they’re making barely enough for themselves,” said Commissioner Tucker. “The smaller ones are bringing it in. It costs a lot of money.”

He says the dairy owners, large or small, are stuck eating those extra expenses, shrinking their small profit margin even further, and making it ever more difficult to make up the lost economic ground.

“They can’t pass those expenses along,” Tucker said. “It takes them a while to make up the basic increases, much less anything else.”

The bigger dairies, however, have more wherewithal to withstand this downturn, compared to smaller dairies that simply do not have the resources to stand the heavy weather of the latest economic downturn.

“I have my in-laws’ dairy for sale right now, because of economy of scale,” Koster said.

And then there’s the fatigue, mental and physical, that is the toll taken on those who work in the dairy industry.

“It’s a lot of work and a lot of pressure. We impact air, water quality, labor. It’s a round-the-clock operation that needs a lot of people,” said Geoff Vanden Heuval, director of regulatory and economic affairs for the Milk Producers Council. “If you look at the challenges we’re facing, it’s challenges on all fronts.”

He too points the finger first at the labor shortage.

“The latest (challenge), which is very critical, is people,” said Vanden Heuval. “There are twice as many jobs as people looking for them.”

The way the business of milking is passed down from parent to child has changed as well, as tightening margins mean lesser profits and a reduced ability to expand for small operations. Children who a generation or two ago would have moved almost automatically into dairying are forced to make their living away from the farm.

“You’ve got all these pressures, what happens is the older generation gets tired and the younger generation is doing something else,” said Vanden Heuval. “The industry, you get tired, and there’s other things you can do with this property. There’s a lot of pressure, and the industry has been in a not-very-profitable position for a while.”

It’s not that small dairy families are lazy or lack persistence. They were beaten by a storm of economic factors they could not control.

“Dairymen are the hardest working guys I know,” said Koster, who spent more than three decades as a dairyman before moving to real estate sales. “When their phone rings at 2 a.m. because there’s a cow down in their barn, they have to go take care of it.”

The shrinking returns on investment no longer allow those hard-working men and women to express their traditional work ethic.

This unyielding economy of scale has created a feedback loop that spells the end for many small dairy owners, says the county’s ag commissioner, further shrinking the industry’s diversity and the career opportunities it once created.

“The smaller and the midsize operators, they’re just not big enough to absorb cost increases like that. The larger ones are,” Tucker said. “The smaller guys will have to sell out, and they’ll sell to the next biggest guy.”

This, in turn, changes employment prospects and perhaps job quality for the dairy industry as a whole, as consolidations lead to fewer options in California for experienced hands.

“The big ones get a little bigger. They might still be family-operated, but now they’re the big ones,” said Tucker. “We don’t want the little guys to go out of business. The small guys will put a few more people in business; they’ll need a few more hands to operate; they may not have the resources the bigger ones do, but they’re good employers.”

Vanden Heuval at the Milk Producers Council agrees that small ranchers are an endangered breed, and, he says, the problem is getting worse.

“The big are getting bigger and the small are getting out,” he said. “I think the pressure is intensifying.”

“It’s a natural transition in our society,” he said. “We do this in a society like we have, as technological advances play themselves through an economy, there are economies of scale, and if you invest and take advantage, you’re in a more advantaged position.”

He points to the fact the state’s dairy production numbers haven’t dropped significantly while the industry fluctuates, and those who survive this period will thrive in the future as, inevitably, conditions change again.

‘Cows Are His Life’

Yet statistics show any bounce-back the dairy industry hopes to see might be a long time coming. Vanden Heuval says only about 900 dairies still operate in California, down from 2,200 two decades earlier. Milk prices are good, but the rising cost of doing business is eating the margin faster than it can grow.

“The dairy business, as far as milk prices, we’re having the highest prices in years,” Koster said. “But the profits are getting eaten up by commodities you have to feed the cattle.

That is a drag on the industry that hits all dairies regardless of their size.

The owners of that dairy sold their land for real estate development, making a one-time profit large enough that it overshadowed completely the prospect of running a marginally profitable business in a struggling industry until the ax inevitably comes down.

Those who suffered this fate or were employed by those who did often find it difficult to move on, says Koster.

“They know how to milk cows,” he said. “It’s hard to take the dairy out of the dairyman.”

For Janie DeRaadt, who shipped the last of the herd off to New Mexico on that cold December morning, this the end of her and her husband’s time in the dairy industry.

DeRaadt says income won’t be a problem, as she will likely return to the industry she left before joining the DeRaadt family. The person she’s worried about is her husband.

“I can find a job,” she said. “My husband is older. His body is broken. I don’t know what he’s going to do. Cows are his life.”

10 thoughts on “Economics of dairying are changing fast”