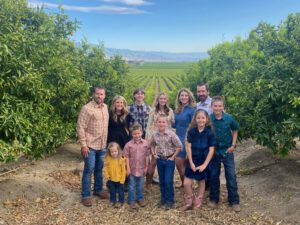 Three generations of the Gless Family will be honored as the “Citrus Family of the Year” during a dinner program on Friday, April 22 at Farmer Bob’s World in Ivanhoe.

The Gless Family has been growing citrus and managing groves throughout California for 60 years, and their contributions to the industry will be the highlight of the fourth annual “Tree to Table: Dinner in the Groves” event that runs 5:30-8 p.m. Friday, April 22. The evening will include a barbecued steak dinner, orchard tour and entertainment by Lon Hannah of Sons of the San Joaquin. Tickets are $100 each; table sponsorships start at $600.

“Our mission is to convey that families are behind California produce,” McKellar said. “We want to dispel the notion in the minds of customers that oranges, and other citrus, come from ‘factory farms.’ In fact, citrus in the San Joaquin Valley is grown by families like the Gless Family who eat the same oranges they grow and sell.”

Gary Caviglia, board president of Farmer Bob’s World, said the Gless Family stood out among those nominated.

“Our board selected them as outstanding representatives of the growers in our valley,” he said. “The citrus industry is dominated by multi-generational family farmers who take great pride in producing food for our nation and the world.”

Second-generation farmer John S. Gless said the family is humbled to be named Citrus Family of the Year.

“I feel so blessed to work with my dad and my son,” he said. “The whole family has a work ethic that we were taught at an early age, and that is to work harder than everybody else. We are blessed to be working with great people, some of whom have been with us for 45 years. It’s all about having the right team.”

In Tulare County, citrus is the second-ranked crop after milk, according to the 2020 Agricultural Commissioners Report. Navel and valencia oranges alone represent more than 87,000 harvested acres in the county. The majority of those groves are owned by family farms.

The Gless Family’s citrus-growing pursuits started in 1960 with 20 acres and today encompasses 10,000 acres in Kern and Riverside counties. They also manage acreage in Tulare County.

Janet and John J. Gless purchased the initial 20 acres in 1960 in the Woodcrest area of Riverside. Planting the grove himself, John accepted and ultimately won a $100 bet from an Orange County farmer who was certain that citrus would never be viable in the area’s granite-filled soil. The groves thrived, and skeptics began to take notice. Investors sought out John’s expertise in planting and farming ground in the area, and John J. Gless Orchard Care was born. By 1978, a fruit stand was erected, enabling the family to sell direct to consumers. As a youth, John S. Gless designed a logo that is used today for Gless Ranch. Visitors can still buy fresh California citrus at this fruit stand in Riverside.

The family’s operations expanded to include Hemet and the Coachella Valley. But with development encroaching in Southern California, Gless Ranch decided to add acreage in Kern County. In 1992, the family purchased 160 acres after a devastating freeze forced many growers out of business. They soon began farm management for other growers in both Kern and Tulare counties, specifically in the Porterville and Terra Bella areas.

Historically, the family performs an important task: managing the orange grove at California Citrus State Historic Park in Riverside. The park interprets the citrus industry’s role in the history and development of California, and explains the complexities of the time when “Citrus was King” in Southern California.

Today, John J. Gless and Janet maintain an active role in the company.

Following in the traditions of his grandfather and father, John C. Gless maintains operations in Southern California where he lives with his wife and children, who represent the fourth generation of Gless Ranch. That includes oversight of Gless Ranch Nursery in the Coachella Valley. The nursery was purchased in 2015 from Dowlin Young, who for years supplied Gless Ranch with the trees needed for their farming operations. John C. is active in industry organizations, including the Citrus Pest & Disease Prevention Committee (CPDPC) and the Citrus Research Board.