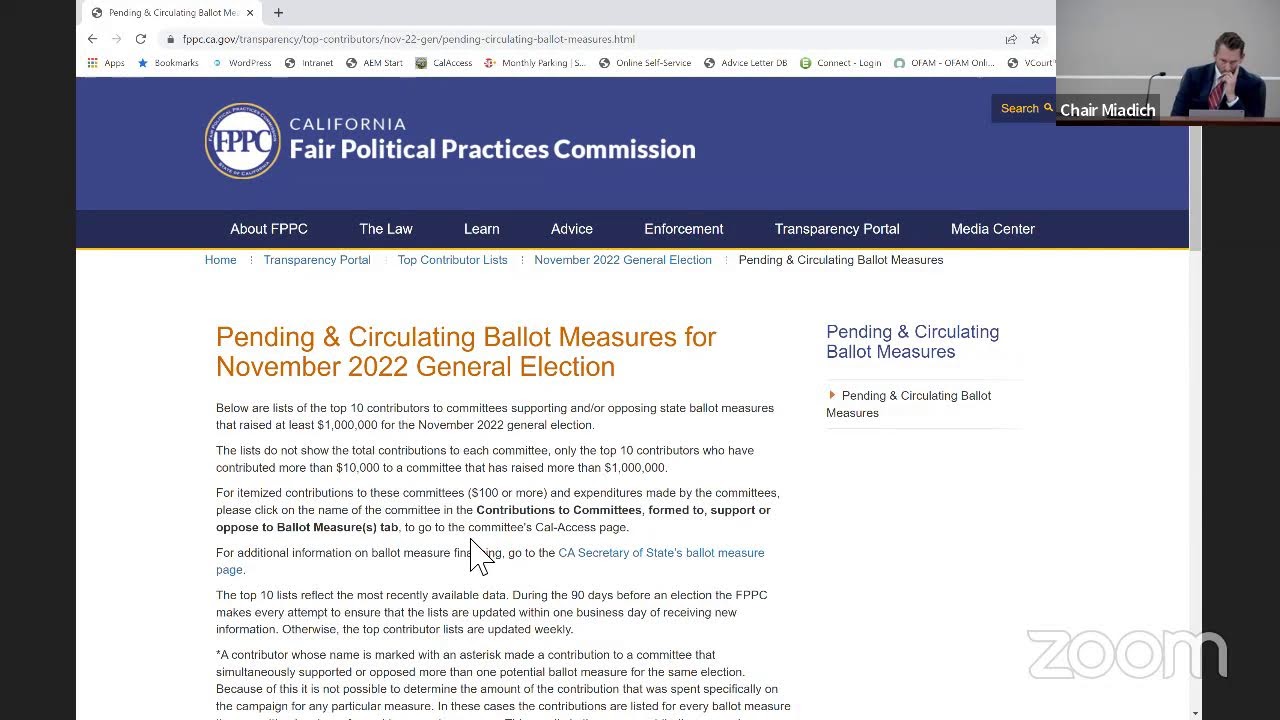 The Fair Political Practices Commission (FPPC) staff proposed a $3500 fine on former Hanford Mayor Dan Chin but today, February 17, the commission unanimously rejected their own staff’s recommendation, embedded at the end of this article.

The FPPC sent the matter back to the staff saying that the campaign law violation committed by Chin was serious.

The FPPC wants Chin to pay a higher fine. The maximum that could be charged is $5,000.

Chin is the treasurer and principal of Hanford Now, a political committee that was involved in the recall of Hanford Council member Francisco Ramirez. Ramirez was recalled in January of 2018 but then won his seat back that November.

FPPC staff said that in a mutually agreed upon legal statement between the state and Chin that Chin admitted he violated campaign law. Chin later said it was negligence on his part.

According to the statement of facts, or stipulation, Chin accepted $9,100 in cash contributions—many in the form of $100 bills— for Hanford Now from January 1, 2016 and September 30, 2017. The law states that cash contributions of $25 or more must be reported.

Chairman of the FPPC Richard Miadich said it was “…hard to believe (Chin) acted negligently. These things can’t both be true. I believe the bag of $100 bills (rather than his) statement.”

Meanwhile, Ramirez told the commission, “I can tell you without a shadow of a doubt (Chin) tried to deceive the public.” He said he was referring to money Chin got from the public and special interests.

Although Chin said he is no longer actively involved in local politics he is currently a LAFCO commissioner along with Ramirez. He recently spoke at Hanford council meeting opposing zoning changes at 12th and Lacey Avenue and the Costco Center. LAFCO is responsible for coordinating changes in local boundaries such as the annexations of cities.

Chin told the Valley Voice that before the FPPC hearing today that the staff could find no intent of wrong-doing. He said that the FPPC staff reduced the number of violations from 21 to one and the fine from $105,000 to $3,500. He said the commission proceedings against him are civil in nature, not criminal.

But the stipulation stated that Chin should be fined for causing “…public harm in the way that these violations inhibited the ability of the Enforcement Division to determine if other violations were committed.”

“By accepting cash, the public has no assurances that the true sources of the contributions were properly disclosed,” according to the stipulation.

According to the stipulation Chin made statements that were not consistent with the evidence. “For example, when asked about cash contributions, he asserted that he did not need to report individual contributors because the cash contributions were under $100.”

The stipulation concluded it was unclear if there was an intent to mislead or conceal the true source or if Chin was negligent in collecting the money and keeping documentation. Later, the stipulation said, Chin refused to meet with an investigator.

Chin repeatedly accepted cash contributions, according to the stipulation. He failed to amend campaign statements to reflect the itemized contributions of $100 or more that were received in cash.

Chin has claimed, the stipulation said, that the contributions did not have to be itemized as they were under $100. “However,” according to the stipulation “this is unlikely to be true as the cash was received as $100 bills.”

During Chin’s successful recall campaign he accused Ramirez of mishandling campaign funds, exactly what he is has been found guilty of now by the FPPC.

Hanford Now, according to the stipulation, had a prior history of problems. The Enforcement Division issued a warning letter to Hanford Now for failing to disclose it was primarily formed to oppose a local Hanford ballot measure.

In response to a question from Commissioner Catharine Baker, FPPC Chief of Enforcement Angela J. Brereton said she didn’t know who started the investigation against Chin. It could have come from an anonymous complaint or was the result of a spinoff from another case, Brereton said.

The FPPC enforces the state’s Political Reform Act which was passed in the wake of Watergate. The law regulates campaign activities and personal financial affairs of state and local officials.