A press release from the Carnegie Museum of Kings County

In conjunction with Black History Mon 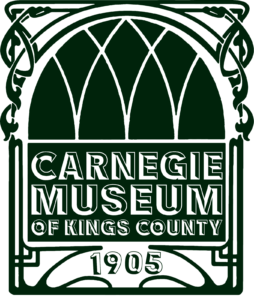 th, the Carnegie Museum of Kings County (CMKC) will be celebrating the longstanding presence and rich contributions of African Americans in Kings County and surrounding areas in a special exhibition that runs from Feb. 11 through April 24.

The exhibition will include artifacts from area farm labor camps where many Blacks settled in the 1930s after migrating from the southern and eastern United States. Displays will feature some of the first Black families to move to the county and the churches and organizations that have played central roles in local African-American life. Visitors to the museum will also have an opportunity to learn about the Black entrepreneurs, educators, community activists, athletes and others who have made indelible, positive marks on local communities.

Paula Massey, one of the exhibition’s curators, said it is important that both African-Americans and communities at large know this history and the people who have shaped it.

“I think we need to see the progress we’ve made, from living in the camps to owning land and businesses,” she said of African-Americans, adding that the trajectory sets an inspiring example for Blacks to “continue making strides today.”

Massey said the exhibition will give people of all races an opportunity to learn more about a vital community whose stories have often not been told.

“This exhibition is truly a community based effort with over two dozen organizations, families and individuals contributing artifacts or financial support,” said museum president Jack Schwartz. “We are proud that this exhibition is another example of CMKC’s working together to bring Kings County history to life for our community.”

The Carnegie Museum of Kings County is located at 109 E. Eighth St. in Hanford. The Black history exhibition will be open to the public Fridays, Saturdays and Sundays from 1 to 5 p.m. Admission is free but donations are appreciated.