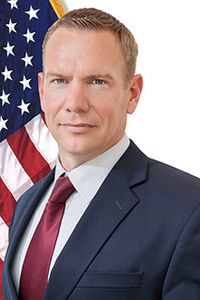 “This is a campaign fighting to improve our Valley – from lowering the cost of living to boosting our water supplies to keeping our neighborhoods and communities safe,” Magsig said. “I’m honored to have the support of such strong leaders as Sheriff Boudreaux and Supervisors Micari, Shuklian and Vander Poel and look forward to working with them to deliver the Valley’s message on Capitol Hill.”

“Supervisor Nathan Magsig is a leader who isn’t afraid to shy away from hard work. That’s why we need him in Congress. He has the vision and focus to deliver for the Central Valley and will be a strong advocate for local law enforcement to be properly equipped to keep our communities safe,” Boudreaux said.

“Whether it’s his long record on the Board of Supervisors supporting law enforcement and our justice partners in the Central Valley or working hand-in-hand with rescue operations in the Sierra during wildfire season, he’s the right choice for Congress.”

Vander Poel represents District 2 on the Board of Supervisors, which includes the communities of Tulare, Tipton, Pixley, Earlimart, Allensworth, and Alpaugh.

“For two decades, Tulare County and the San Joaquin Valley has had a strong voice in Congress. Now, we have the chance to send another one: Nathan Magsig,” Vander Poel said.

I’ve worked closely with Supervisor Magsig over the years and he is ready to fight on Day One to reverse the flow of water to the ocean, increase our water supply, and help Valley farms feed the world.”

Shuklian represents District 3 on the Board of Supervisors, covering the majority of the City of Visalia.

“Nathan Magsig is able to bring people of all stripes together and has the tools to solve the biggest problems in our region,” Shuklian said.

“We need an advocate in Congress who will fight for greater local control of key decisions that impact our lives. That’s why Supervisor Nathan Magsig is my choice for Congress in the 22nd Congressional District.”

Micari represents District 1, which includes portions of Visalia along with the communities of Exeter, Farmersville, Strathmore, Lemon Cove and mountain communities of Three Rivers, and Mineral King.

“Difficult times call for strong leaders. In the upcoming election, Supervisor Nathan Magsig is that leader,” Micari said. “I know he will do his best to cut back excessive spending, bring down the rising cost of living, and be an ardent voice for the Valley in Congress.”

The special primary election for the 22nd Congressional district is scheduled for Tuesday, April 5.