Every day and every hour, since May 25, 2020, the world’s attention has been consumed by the unjust killing of George Floyd while the ravages and death toll of COVID-19 stealthily and disproportionately continues to kill people of color.  In fact, the numbers in several states have worsened and the disproportionality has exponentially increased. As an African American retired physician and cardiothoracic surgeon, I have witnessed disparities in healthcare and healthcare outcomes all my professional career.

As a young doctor, my first year after completing medical school, I interned at a private hospital.  I learned, after just a few months, while the patient to doctor ratio was excellent, I was the only black doctor in the hospital.  I also learned that private hospitals can choose to turn patients away if they believe the patient is not able to pay for services since they are privately funded.  It was obvious to me that the technology and amenities were cutting edge.  Most of the patients were white.

In my second year, following medical school, I chose a surgical residency program in a public hospital.  Again, I was one of only a few doctors of color in a large metropolitan hospital. However, a disproportionate number of the patients were non-white.  Wait times were significantly higher than in the private setting.  Care was not as personalized because nurses and doctors were comparatively overburdened by patients and culturally incompatible.

Improved access to medical care through increasing the number of underrepresented minority primary care physicians in our State of California is one very important key to correcting these injustices. Now is the time to act.

“The heavy toll of morbidity and mortality of the COVID 19 pandemic on minority communities is directly linked to the disproportionate burden of chronic diseases they carry. The evidence is clear that access to care from a diverse provider healthcare workforce would reduce this burden and could have dramatically reduced the devastating impact of SARS-CoV2 virus on these communities.”

According to the U.S. COVID Tracking Project: 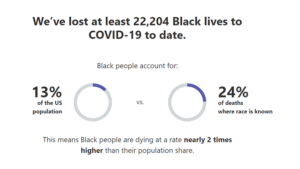 According to a 2017 report from the UCSF Healthforce Center, California is predicted to see a shortage of over 4,000 primary care clinicians by 2030. In regions such as the Central Valley, the Inland Empire and the Imperial Valley, communities are already experiencing the pains of a shortage. Patients in these regions face longer than average wait times to see a physician or extensive time to travel to the closest physician.

These barriers discourage working families from seeking regular care. As a result, the state incurs higher costs to cover MediCal patients who are pushed to utilize urgent care and emergency rooms once they are affected by more acute medical conditions that could have been prevented with earlier and more regular access to a primary care physician.

Four years ago, a group of interested Californians met on the Campus of Stanford University to address the problem of inequities and disparities in the health and health outcomes of California’s diverse communities.  We developed a mission statement related to a proposed program, The California Medicine Scholars Program (CMSP):

“The California Medicine Scholars Program (CMSP) is a statewide, structured partnership pathway to produce underrepresented minority physicians via the California Community Colleges to reduce inequities and disparities in the health and health outcomes of California’s diverse communities.”

Four years later, as a direct result of that meeting and the work that followed, California Senate Bill 40, sponsored by Senator Melissa Hurtado is, today, making its way through the legislative process.

If passed, SB 40 will establish the California Medicine Scholars Program (CMSP) as a three-year pilot program in four regions across the state. The CMS program is a pre-medical pathway pipeline program, in partnership with California Community Colleges (CCCs) and California’s medical schools operated through a statewide office and regional collaborations of higher education institutions and health centers, referred to as Regional Hubs of Excellence (RHE).

SB 40 will be a supportive pathway program for our state’s community college students to pursue pre-med training and enter medical school in California.

So, lets take advantage of this period of heightened attention to unfair disparities and address the institutionalization of healthcare discrimination.

Future disasters here in our State are not just possible, but likely.  When they come, they will once again expose the ugly underside of health disparities unless we prepare now.  Additionally, California is at risk for such events due to our global travel hubs and cosmopolitan populations. Patients must have access to culturally competent care that they can trust, and who understand their experiences and limitations.

CA Medicine would help produce physicians who, once trained, would care for such communities, and come from a background that would help them have an understanding of the way of life that would be integral to enabling them to help stop or limit the next pandemic.