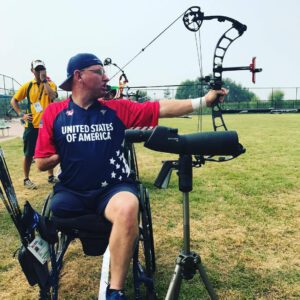 At age 15, Lemoore resident Jeff Fabry lost his right leg and the lower half of his right arm in a nighttime ATV collision. The horrific accident shattered his arm beyond repair, snapped his leg in two leaving no option but amputation, and thankfully it left Fabry’s determination entirely intact. That life-altering event may have even provided the edge he needed to become a four-time medalist in the international Paralympic Games.

But before the glory was a time he thought he’d never fire a bow again.

“I shot archery a little bit before the accident, mostly to go hunting,” the now 48-year-old said. “I lost the hand, and I never thought about shooting a bow again. My friends would go hunting and I’d be stuck waiting for rifle season.”

Fabry hated the idea of being forced into idleness. He refused to be stuck at home while life went on around him. He would not be left behind.

He dug a roommate’s unused bow out of a closet where it had been forgotten. Using a piece of old denim, Fabry fashioned a pull he could wrap around the bowstring and grasp with his teeth. He steadied the bow with his left arm, unsure whether his jaw and teeth could stand the pull, and fired.

With that first arrow, he also launched what would become his career. The path he put himself on was one of discovery–he would find power in the deepened sense of focus he learned while recovering from his accident.

“I think because of my disability, I think my focus became better,” Fabry said. “You’re used to doing things a certain way, then you have to rethink everything.”

Pulling a bowstring with his teeth turned out not to be a problem, and he’s since gotten the OK from his dentist to continue the practice. His teeth, the dentist reports, are perfect.

“It’s the neck that takes all the pressure,” Fabry said.

And it’s taken a lot of that pressure over the years. After recovering his ability to enjoy archery, Fabry found himself spending a lot of time at the now defunct Bow Hut in Visalia. His driving desire to be as independent as possible continued, and he began repairing and maintaining his own archery equipment.

“I wanted to be proficient, so I didn’t have to rely on a guy in a pro-shop taking care of stuff for me,” Fabry said. “Next thing I know I’m fletching arrows for a living.”

When the Bow Hut closed, he continued to practice at Impact Archery in Clovis. That was where he got his start in competitive shooting.

“They asked me if I wanted to go to Vegas one year. It’s a huge competition. It was a whole new experience for me,” Fabry said. “When the whistle went for my first shot, nerves fired up and everything else.”

That first competition didn’t go well, but the future champion was hooked.

Fabry said he “finished poorly”–which had absolutely nothing to do with the fact he was shooting against able-bodied archers–yet he was determined to return. He spent the intervening months training to hone his technique and improve his aim.

“I got back to Vegas the next year and came out the winner,” he said.

Emboldened by his success, Fabry entered the 2000 Indoor National Championship in Oklahoma City and won.

“I said, ‘Holy smoke, I think I found something for myself,’” he remembers.

There were other benefits to this newfound passion.

“The money I won in Vegas, I bought my wife’s engagement ring,’ Fabry said.

Fabry would continue to come out on top in international competitions against able-bodied and paraathletic shooters, eventually winning dozens of medals and championships. Those honors include a trio of bronze medals for Team USA in the Paralympic Games–Athens, Greece in 2004 and Beijing in 2008–and one gold medal in 2012 in London.

While he seems to be a natural-born archer, the truth underlying his success is less mysterious.

“Probably just dedication,” Fabry said. “I put my time in. When I had a free moment, I was shooting.”

He wasn spending all his time practicing and coaching archery–including a stint as coach for the Navy-Coast Guard team at the 2011 Warrior Games–just because he loves the sport and the competition. He also loves his country. He does it for us.

“It’s about the country as a whole. I’m representing the whole United States,” he said of his Paralympic appearances. “I didn’t win them for myself. I won them for everyone else.”

Fabry also spends part of his time with military veterans, using archery as rehabilitation. Asked if he might have chosen a military career, the multi-medalist equivocates a bit.

“My accident happened at such a young age, that time before you really know what you’re going to do with life,” he said.

Even though he’s enjoyed huge successes in the Paralympic Games and intends to return at least two more times–in 2024 and ‘28; this year in Tokyo is out as Fabry continues rehab from shoulder surgery–he almost turned up his nose at that aspect of the competition.

At some point early in his career, Fabry met Aaron Cross, a quadrapalegic bronze-medal winning archer in the 2004 Paralympics, who encouraged Fabry to try out for Team USA.

“I just kind of blew it off, because I shoot with able-bodied guys,” Fabry said.

Then he and his wife Crystal spotted Cross during TV coverage of the Paralympic Games, and she encouraged him to participate. Fabry, however, still felt the competition might not be equal to the level he was experiencing. Crystal Fabry persisted.

“She said, ”They’re going to be just as good as you are,’” he remembers her telling him. “‘You’re not going out there for a pity party. You’re going out to influence others.’”

What he’s after as an athlete and citizen is simple.

“The end goal is to try to be the best I can in my sport, but at the same time give back to those who need it,” Fabry said.

Competitive performance on the archery range isn’t the only way Fabry is influencing people these days. He makes his living mostly as an archery coach, working closely with his daughter Rebecca, who has been shooting since age 4. His new home base is the Kings Gun Center, and he offers lessons and coaching to archers of all ages and ability levels.

“Right now, it’s getting the students going and getting them coached right,” Fabry said. “Enjoyment is cool too: local competitions, hunting, whatever.”

With the summer months just around the corner, Fabry hopes to host a series of daily lessons as a sort of boot camp for all ages of starting shooters. He would like people to appreciate his sport as much as they’re able.

“Whatever they want, that’s what I want to take care of,” he said.

And, Fabry continues to both train for world-class competition and to coach others to achieve at that level. The truth, however, is only the elite will ever live the life of an Olympian.

“As far as Olympics and Paralympics, I’ve coached individuals to that level,” Fabry said. “Everyone says they want to be, but the ones who want to put the time in, there’s just a few. You have to have the drive to make this dream come true.”

2 thoughts on “Paralympic archer refuses to be left behind”