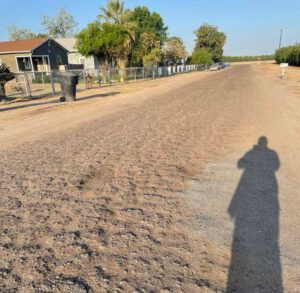 I am saddened to see the state of Pixley that leaders have let dwindle to the look of a third world country. I invite former residents of Pixley to ride through and look at what the town has become.

I am a very proud veteran from Pixley who served 23 years upholding American values and to come home to Pixley and see that  leaders have done nothing to maintain or even grow the community is embarrassing and shameful. I was raised on the west side of Pixley on Compton where my mother has lived for over 45 years and to see her street, and practically every street on that side, in shambles is shameful.

This is a leadership problem.

Pixley finances needs to be audited to see where and how taxes are being spent. The folks of Pixley need leaders that look out for their best interests I have seen roads on the battlefield in much better shape. If the leaders would have taken care and done the proper preventative maintenance on the intervals recommend we wouldn’t be having the issues stated above.

I recommend you do a fly over or even a google search of Pixley. It look like a desert.

People of Pixley stand up and cry aloud and demand more for you town. Don’t be a people sitting on the sideline taking the leftovers. The county of Tulare has some of best fertile land around yet it seem as though leadership has sucked the life out-of this small town. Pixley deserves better

The systematic approach to killing a small town is in full affect in Pixley and probably every surrounding small town. Tulare County leadership needs to ride through the town and see for themselves. On the west side there was once an alley between west Bradbury Ave and west Compton Ave beginning at Airport street going all the way to Cedar Street.  But because of the preverbal blind eye approach it has illegally disappeared.

Who is it that the people need to hold accountable?

So I will answer that question. It is leadership. There is a saying I taught my Soldiers “Lead, Follow, or Get out of the Way”. If leaders are there to serve people they need to serve or get out of the way. Why not set in motion to make Pixley neighborhoods the best looking in the county. There is a host of smart folks in the county to teach resident how to capture rainwater, use it to beautify the yards and how to maintain the community. But it starts with Leadership.

There are plenty of people within the town and county that can be put to work helping fix roads, clean up streets and alley. There are people in Pixley living in cars that need to be put to work.

Where and how is the tax money being used that people from Pixley pay?

Money always has a story and the right somebody can follow it and make it talk. It will tell everything – how it is being used and abused, how it is being loved, the places it traveled, even the places it didn’t go. Money is a tattletale. It also likes to work, support and build. I am not saying that the money in Pixley is being used illegally I just question where is it being used.  Just look around town – it is talking.

Leaders lead and fix up Pixley.

6 thoughts on ““I am saddened to see the state of Pixley that leaders have let dwindle..””