The Hanford-Lemoore Future obtained copies of the removed pictures from Russ Curry, a former Hanford mayor and Hanford Police detective.

A State of California Department of Justice (DOJ) complaint not only alleges cash bribes but accuses Hanford Developer Jerry Irons of paying for several leisure trips for Ramirez and Brieno. Pictures of these trips have been removed from their Facebook accounts.

The alleged bribes happened last year when Aguilar’s auto repair shop was facing closure by the city and are documented in the DOJ Complaint. According to the complaint, “On July 7, 2020 and July 8, 2020, we allege City of Hanford Mayor Francisco Ramirez and City of Hanford Councilman Art Brieno demanded and received bribes of $400.00 each from Hanford resident and businessman Richard Aguilar…,”

In addition, Cheyenne Strawn’s Facebook pages showing photos of these trips were also removed, said Curry. Strawn is a Hanford Parks and Recreation Commissioner. Strawn accompanied Ramirez and Brieno on two or more of these trips.

Irons has denied that he paid for the trips taken by the two council members and Strawn. Irons allegedly paid for the trips, according to the complaint, to aid in his efforts to have Hanford Community Development Director Darlene Mata fired because she was thwarting approval of his projects.

Brieno and Ramirez were also seeking to have Mata fired, according to the complaint. 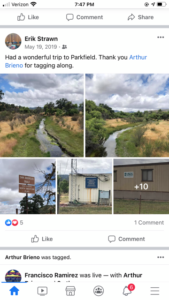 Although Brieno later told the city council he wanted Mata moved to a different position.

In response to the allegations, Ramirez, Brieno, and Strawn all said they paid their own way. Brieno said he has credit card statements and will provide them if the matter goes to court while Ramirez and Strawn said the trips were years ago and they do not have receipts.

Regarding the Facebook photos one shows Ramirez at the Luxor Hotel in Las Vegas, another on a street in New York City and a third in a room in San Francisco. Another photo previously on Ramirez’s Facebook page shows Ramirez at Bryce Canyon National Park with Brieno and Strawn in Utah. It was dated May 12, 2020.

The September 7, 2019 picture that was previously on Strawn’s Facebook pages shows a trip to Sacramento with Brieno and Brieno’s son who lives there. A May 19, 2019 Facebook post by Strawn mentions a trip to Parkfield, Ca., said Curry.

The three men had three different stories as to why the photos were removed from their Facebook. 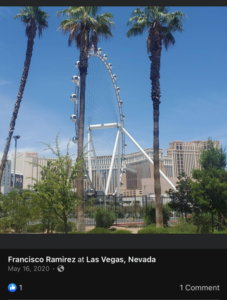 Ramirez said the trips do not appear on his current Facebook page because when he was vice mayor he was censored by Facebook and had to create a new Facebook page. He said whoever is making these allegations should come forward. They are being made, Ramirez said, “by people who want to see me out of office.”

Asked about why the pictures are no longer on his Facebook Strawn said, “I don’t look back a year. As far as I know (I) don’t think they are down.”

He added, “This is getting ridiculous nitpicking little things. We pay our own way, split lodging. Irons had nothing to do with those trips.”

When asked why the pictures of his trips were taken off his Facebook, Brieno said that the allegation is just being used as a “…character assassination campaign against me.”

Brieno responded to the accusation that Irons paid for his trips to Bryce Park and Sacramento saying, “That’s a new one to me. We took trips but Jerry was not a part of it.”

Brieno said that after the stimulus checks came out, along with the extra unemployment funds, it was so much money that people bought cars and took trips. He said that the newest stimulus check for a family with two kids is going to be over $5000.

“People don’t need it and they are going to take trips.”

The state Department of Justice has refused to confirm the existence of any investigation and Curry said he did not write or file the complaint with the state. A copy of the complaint was obtained by Hanford-Lemoore Future but the newspaper does not know the identity of the author.

Strawn also disputed part of the complaint filed with the state Department of Justice that alleged that he attended lunch meetings during the summer of 2020 with Brieno, Ramirez, Council Member Kalish Morrow and Aguilar who was facing shutdown by the city for various violations.

Strawn and Morrow said they did not attend any meetings with those parties.

Ramirez said there was one lunch at Colima’s Restaurant to discuss Aguilar’s problems.

Other Facebook postings shown on or about November 9, 2020 that have been removed reveal Brieno and Strawn took a trip to Arizona and New Mexico, said Curry. Ramirez’s pages showed trips to Bend, Oregon and Vancouver, Washington on or about September 4, 2020, said Curry.

The Facebook postings also show that during the 2018-2019 period Ramirez, Brieno and Strawn took numerous trips to Parkfield and Barstow, Ca., said Curry.

Ramirez and Strawn said they have not been contacted by investigators from the state Department of Justice.

Catherine Doe contributed to this article