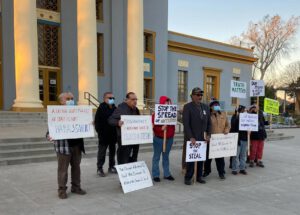 So it went here Tuesday night when ex-councilman Art Brieno reclaimed his District E council seat after resigning after a closed session January 26. Brieno resigned late January in the wake of a scandal over his alleged harassment of the Community Development Director Darlene Mata.

Brieno took his place on the dais Tuesday night for the regular city council meeting without fanfare or initial protest from other council members. Brieno did not participate in the the previous work session or during the closed session where his status was discussed.

Several improperly noticed city council meetings and the potential for litigation might have acted as motivators for the remaining four council members to allow Brieno to retake his council seat.

Towards the end of the meeting Council Member Diane Sharp (District C Northeast) said Brieno should be censured by the council. A censure is a possible alternative to costly litigation. City Manager Mario Cifuentez said the censure will most likely be done at the March 2 city council regular meeting.

Shock ran through the Zoom audience when Brieno took his seat on the council. A clearly annoyed Rachele Berglund, lawyer for Mata, asked during public comment how a council member who “unequivocally resigned” could take his seat on the dais.

Four other people spoke during public comment dismayed that the council members could “just sit there and act like nothing was going on.” Another speaker asked for increased transparency, “It is your responsibility to share what is going on here.”

Mayor Francisco Ramirez agreed and opened the discussion for Hanford City lawyer Ty Mizote and Brieno to address the issue.

Brieno said his initial resignation was not legal because he never signed the agreement brokered by City Attorney Bob Dowd. Dowd also pressured him to resign immediately at the January 26 meeting, not at the end of the month as Brieno had wanted, Brieno said.

“Dowd said (I) had to resign that evening,” Brieno said. “I made a (resignation) statement contingent (on the) terms agreed.” When Brieno’s attorney, Steve Dias, called him and said the terms were not what was agreed to, Brieno said he couldn’t sign the resignation agreement.

Brieno also said another law firm was hired by the city to investigate Brieno’s actions toward Mata and that the law firm put out a one-sided story that was defamatory to him.

“My record has always shown for the best of the city,” he said. He attributed his problems with the city to poor communication.

Attorney Ty Mizote of Dowd’s office told the council that there were two conflicting points of law. One, he said, is when a public official verbally resigns from office, the resignation is effective with the statement.  The other, he said is that for a resignation to be effective it must be submitted in writing to the city clerk.

Mizote offered to further brief the council on the legal issues at the next meeting but the council declined his offer.

Brieno’s return has implications for both Dowd’s office which has a lucrative contract with the city and City Manager Mario Cifuentez whose job could be at stake.

Brieno is known to be unhappy with the performance of both.

Brieno is aligned politically with Mayor Francisco Ramirez and Council member Kalish Morrow and may be able to influence their votes concerning Dowd and Cifuentez.

In addition, Brieno is a political ally of local developer Jerry Irons who has had multiple conflicts with Mata over his development projects and has pushed repeatedly to get the council to remove her from her position.

Mata’s harassment lawsuit was on the consent calendar and the item was pulled by Sharp for the sake of transparency. The claim was only identified in the consent calendar as “Reject notice of government claim” but it is known to be Mata’s lawsuit. The council Tuesday night voted 5-0 to reject Mata’s $1.25 million claim.

Mizote explained that it is standard procedure to reject a claim. The city’s insurance company recommended the move, he said. The rejection limits the amount of time the claim is valid to six months, Mizote said.

Prior to the start of the meeting there was an argument between members of the public and city staff over whether the public would be allowed to listen to the meeting inside the council chambers.

The meeting was lived-streamed but only the council, a few staff and members of the public and news media were in the chambers.

Councilman John Draxler said the limitation was due to CalOSHA concerns about infecting people with COVID.

But Bob Ramos, local activist, said it was an attempt to stifle public participation.

Ramos said he was not leaving. Former Mayor Lou Martinez was also present. Ramos, Martinez and a news reporter for Valley Voice and Hanford-Lemoore Future newspapers were eventually allowed to stay.

A protest by about a dozen Brieno supporters also took place in front of the civic auditorium before the meeting started.

Protesters carried signs such as “Due Process is Still a Right” and “Stop the Spread of Untruths.” Brieno spoke to his supporters admitting mistakes but defending his right to ask questions of staff.

In reference to a city-commissioned investigation, supporter Emily Burnias said, “anybody reads that and reads between the lines (can see that)…you were pushed out of your position. To me they’re building up reasons to get rid of you. You were given the shaft.”

Brieno’s troubles are not limited to his conflict with Mata and the city attorney’s office. A complaint filed with the state Department of Justice alleges that both Brieno and Ramirez each took a $400 cash bribe to intervene July 7 on behalf of local auto repair shop owner Richard Aguilar. Aguilar was having trouble meeting various city regulations.

Brieno and Ramirez were successful in getting the council to give  Aguilar more time to deal with his problems.  A copy of the complaint was obtained this month by Valley Voice and Hanford-Lemoore Future newspapers. Both Brieno and Ramirez have denied the allegations contained in the complaint. The state Department of Justice will not say whether it received the complaint or whether it is investigating it, according to a January 28 email.

A special meeting has been called tonight at 5:00 to discuss negotiations between the city and Brieno regarding his resignation. Because of the threat of litigation the meeting will be a closed session.

One thought on “Art Brieno Back on Hanford City Council, rescinds resignation”