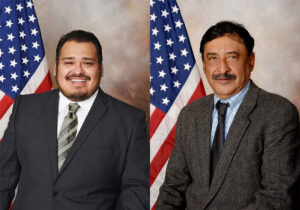 During a July 7, 2020 hearing Brieno and Ramirez were successful in convincing fellow council members to give Aguilar more time to correct his repair shop’s violations. Hanford City Community Development Director Darlene Mata and her staff were attempting to shut down the shop for various regulation violations.

According to a complaint filed with the State Department of Justice, “On July 7, 2020 and July 8, 2020, we allege City of Hanford Mayor Francisco Ramirez and City of Hanford Councilman Art Brieno demanded and received bribes of $400.00 each from Hanford resident and businessman Richard Aguilar…,” the complaint said.

A reliable unnamed source delivered a copy of the complaint to Hanford-Lemoore Future.

“To protect its integrity, our office cannot comment on potential or ongoing investigations, including the complaints that we receive,” said the state Attorney General’s press office in a January 28 email to this newspaper.


Brieno denied receiving any bribes from Aguilar, owner of the automotive repair shop at 330 East 7th Street. Brieno said he did have lunches with Aguilar at Colima’s Restaurant next to Aguilar’s shop. He said Aguilar paid for the lunches.

Ramirez also denied that he asked for or took a bribe from Aguilar. He categorically denied all the allegations against him in the complaint.

He did confirm that there was one lunch at Colima Restaurant. The topic of the discussion with Aguilar was resolving his problems with the city. Ramirez first said he paid for his own lunch. He then called the reporter back and said if Aguilar paid, it was less than $10.

Ramirez said he was willing to take a lie detector test with whoever is making these accusations. He called the charges against him “sad” and “a joke.”

Then council candidate Kalish Morrow (District B) also met during the summer of 2020 with Brieno, Ramirez, Parks and Recreation Commissioner Cheyenne Strawn, and Aguilar multiple times for lunch at Colima to plot strategy, according to the complaint.

Strawn said that he and Morrow were putting up her campaign signs downtown and stopped by Colimas for lunch. While there, he said, “Francisco and then Art pulled up separately” and joined them at the small eating area outside due to COVID. Strawn said that Aguilar  also arrived, sat at their table, and discussed the list of violations he received from the city.

“But nothing happened at the lunch,,” said Strawn. Aguilar often goes to Colimas, said Strawn, because his shop is next door.

“Richard always pays everyone’s bill because he keeps a tab at Colimas. But I’m not going to throw away my political career for a bean and cheese burrito and lemonade.”

Morrow, who was later elected to the council, received a $150 campaign contribution from Aguilar at one of the lunches but the contribution was not reported on state Fair Political Practices Form 460 as required by law, according to the complaint.

Morrow said she first met Aguilar when she was campaigning and he did not contribute any money to her election efforts.

Hanford-Lemoore Future spoke to Aguilar twice and he said he was too busy and couldn’t talk and would call the newspaper later. He never did.

In regard to plans to fire the city attorney, Mata and possibly Cifuentez, Morrow said there was “no plan or discussion, no meeting of the minds.”

Morrow’s vote was needed by Ramirez and Brieno as the third vote to terminate the contract of city attorneys LaSalle Grisworld and fire Mata and possibly Cifuentez, according to the state department’s complaint.

The plan was for Ramirez to request Mata’s firing and if Cifuentez didn’t agree, Ramirez would call a special meeting to fire Cifuentez, according to the complaint.

Ramirez said in response that any termination of employment is conducted on a merit basis. Further he said he was not angry with Darlene Mata.

Investigation of Brieno after July 2020 meeting

After the July 2020 city council meeting where Ramirez and Brieno successfully delayed the closure of Aguilar’s auto shop, the Law office of Griswold, LaSalle, Cobb, Dowd & Gin initiated an investigation of Brieno. It is unknown if the investigation was in retaliation for Brieno allegedly wanting to cancel their contract.

The investigation alleges that Brieno inappropriately revealed that Mata left work on stress leave and that he “told others Ms. Mata and Mr. Cifuentez were having an affair.”

The report also alleges, “he (Brieno) did not trust a woman to hold the job Ms. Mata held,” and that he said, “a man was better suited for that job, and that he did not know how a woman got that job over a man.”

As a result Mata is seeking $1.25 million in damages.

Mata’s lawsuit was discussed in a special city council meeting on January 19. As a result, Brieno abruptly resigned the following Tuesday during a continuation of that meeting.

But in an unexpected twist, Brieno had a change of heart and is now considering a lawsuit against Hanford.

In the Hanford City Council agenda packet for a special meeting being held today February 5 it states, “On February 3, 2021, a threat of litigation against the City of Hanford (City) was made to City Attorney Ty Mizote during a phone conversation with attorneys for Arthur Brieno. Mr. Brieno’s attorneys allege that the City caused Mr. Brieno to suffer damages.”

In another twist concerning Brieno’s now vacant council seat, according to multiple supporters who spoke at Tuesday’s regular city council meeting (2/2/21,) Strawn is a candidate to fill Brieno’s term on the council. Strawn is a subject of the complaint, ran for city council in 2018 and is Brieno’s current roommate.

Additional allegations in the State Department of Justice’s complaint regarding the alleged bribes further detail Ramirez and Brieno’s motivation to have Mata fired and will be discussed in a follow up article in the Hanford-Lemoore Future after further investigation.

The allegations regarding bribery, if verified, are sure to rock the city already under duress from the Brieno resignation and the financial and emotional fallout from the pandemic.