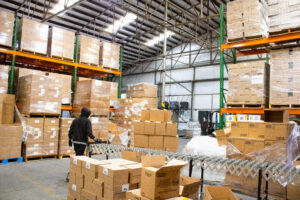 Its efforts were met with a letter of denial, stating that FoodLink was “at capacity.” And when Galviso appealed to the state and Tulare County Board of Supervisors in hopes of receiving help with the matter, they both denied jurisdiction.

Since then, FoodLink has contacted RCRC about their willingness to meet and discuss logistics regarding additional USDA food distributions to the Orosi area. However, RCRC has been adamant on having direct board-to-board talks about addressing the “inequity” and “discrimination” against the rural communities of the greater Cutler-Orosi area.

The Valley Voice spoke to FoodLink for Tulare County Board President Rie Reniers and visited its warehouse in Exeter to get a better understanding of their food distribution operation and why it has had to deny RCRC access to USDA food commodities.

One would imagine that a warehouse with the purpose of storing and distributing food meals to communities across Tulare County would be bustling with activity.

But as you pull up to the FoodLink warehouse off Firebaugh Avenue in Exeter, you are more likely to notice the giant red heart painted on the front of the facility, than the noise coming from it.

And that’s because there was none.

No engines idling between loads. No forklift horns blaring as they ramp onto delivery trucks. No supervisor barking orders. The facility was silent, aside from the sound of Mexican music coming from a vehicle nearby.

Inside the warehouse wasn’t much different. The office space beyond the entrance of the warehouse held just a handful of staff, one of them being Executive Director FoodLink for Tulare County, Nicole Celaya.

Celaya directed us to a large FoodLink calendar for the month of December. Every date on that calendar, except for the week of Christmas, was filled with multi-colored events relating to food distribution programs and pantries throughout the county.

“We serve approximately 30 USDA pantries and communities every month,” Celaya said with a hint of weariness. Celaya, who had left her career as an English professor because of her workload, now had notable dark circles under her eyes and was wearing her surgical mask upside down.

It was becoming clear that FoodLink’s claim about being “at capacity” may have been an understatement, a suspicion that rang true as Celaya revealed the working conditions in the storage area of the warehouse.

“It’s not a lack of product. It’s a lack of manpower.”

The storage area held dozens of pallets of food reaching towards the warehouse ceiling. These were the USDA food commodities Galviso and RCRC had been trying to get a hold of for months. Surely, among one of these columns was a spare pallet or two for the farm workers of Orosi and the surrounding agricultural communities.

Unfortunately, it was not that simple.

Even before the pandemic, FoodLink did not have enough resources to fill the gap in the food system. And the virus has made things worse by limiting the amount of volunteers and staff FoodLink can have at its facility. 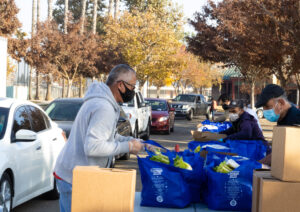 Among the countless boxes and pallets of food, only a single worker was visible, a young man from C-Set named Jonathan, patiently stacking food from a conveyor belt onto a pallet. Occasionally a second employee would appear around the corner in a forklift. But other than that, the warehouse seemed to be devoid of staff.

Board President of FoodLink for Tulare County, Rie Reniers, explained that its overhead was slight in comparison to the communities they serve.

“For the size of our county, we have a very, very small staff,” Reniers said. “We used to have teams of volunteers to help at the warehouse and kitchen, but the virus has limited that.”

FoodLink for Tulare County typically has a team of four in the office, and three or four others in the warehouse. If you add the temp workers, that brings the total staff to around ten or 11 staff members total, a rather slim team for the task of filling the food insecurity gap in one of the largest counties in California.

As a non-profit, FoodLink gets plenty of funding for food. But staff is a different story. This further complicates things when it comes to delivering all of the food stacked in the warehouse across the county.

“We only have so many trucks and so many drivers,” Reniers said.

Director Galviso of the RCRC doesn’t buy FoodLink’s story regarding its lack of manpower and delivery limitations. She explained that there would be no need for FoodLink to deliver the food to Orosi because RCRC would simply pick it up themselves like they have been doing every Friday.

“We’re farmers,” Galviso said. “We have our own produce trucks. We’re used to working in the fields. We’ll manually take that food to our communities.”

FoodLink claimed that RCRC’s facility was not up to USDA standards and therefore could not store USDA food commodities. But Galviso stated that argument doesn’t hold water either, because RCRC doesn’t plan on storing the food in the first place.

“Why would we store the food?” Galviso asked. “The food is to be given the moment it is received.”

Galviso believes the real reason FoodLink has been hesitant to give USDA food commodities is because FoodLink already has a contract with another organization that has a pantry in that area, Open Gate Ministries of Dinuba, a private non-profit that also holds food distributions in Dinuba and the Cutler-Orosi area.

“The real issue is if FoodLink is ready to break the contract [with Open Gate Ministries] and ready to work with people of color.”

According to Renier, RCRC’s denial of USDA food commodities was indeed related to the Open Gate Ministries pantry, but not for the reasons Galviso thought.

Reniers admitted to having a long working relationship and contract with Open Gate Ministries. But she explained that giving USDA food commodities to RCRC would not breach the contract and it was not the reason for the denial.

The more important factor, according to Reniers, is about food reaching as many communities as possible in Tulare County:

“We’re trying to serve the whole county and that’s difficult when you create two distributions in one community…If there wasn’t already a pantry there, that would be a different story.”

But Galviso doesn’t buy that explanation either. She believes rural communities have a greater need than urban areas, especially in farm worker communities like in Orosi that have trouble finding work in the winter.

“What is the proportion of food that goes to urban areas as compared to the rural communities? In the winter months half of this town is unemployed. [FoodLink] needs to adjust in relation to need.”

According to Galviso, FoodLinks preference for urban areas is concerning because many of the rural communities that are most in need are populated primarily by people of color:

“It really speaks to discrimination.”

A National Food System to Blame?

Reniers expressed her concern for the farmworkers of Cutler-Orosi. But whether or not FoodLink could afford to add another food distribution to Orosi was still in question, especially during a turbulent year like 2020.

Celaya revealed that the FoodLink warehouse was not even close to meeting the growing needs of Tulare County. In fact, there had been a 50-100% increase in food insecurity since the beginning of the COVID-19 lockdowns in March.

Statistics that are reflected at the distributions FoodLink hosts in larger cities like Visalia or Tulare. Cars have been numbering in the hundreds, lining up for food whenever FoodLink offers them.

“The food system has been very inefficient in meeting the needs during this time,” Celaya said. “Especially at the beginning [of the pandemic] we couldn’t find anything to purchase.”

Celaya explained that food commodities are still difficult to come by today and are becoming more expensive by the day.

She revealed that food availability remains uncertain for next year as well:

“All of the food banks are looking at what’s called a food cliff in 2021. None of the funding that we have been getting is secured for 2021…They’re expecting USDA commodities will be delayed or maybe cancelled.”

This uncertainty for the coming year has forced FoodLink to start stockpiling. The non-profit has purchased over a million dollars in preparation for a potential supply chain failure.

This may also explain why FoodLink has been so hesitant to release USDA food commodities to RCRC. Not only does FoodLink have to worry about distributing their food so that it reaches Tulare County as a whole, it also has to consider another future breakdown of the supply chain.

“I don’t know what percentage of the food at the warehouse is for next year,” Reniers explained. “If we’re gonna have a huge [COVID-19] spike over the winter, the same thing might happen in regard to the supply chain.”

FoodLink recently reached out to RCRC about discussing additional USDA food commodities in Orosi with Executive Director Celaya, stating these sort of operational decisions are made at the staff level and that if negotiations at the staff level don’t work, then discussions would move to the board.

RCRC disagreed with that sentiment, and believes that staff can only give recommendations, while the board ultimately makes the decisions.

“If we really want to address food inequity, the board needs to be involved,” Galviso said.

Galviso also mentioned the possibility of filing a complaint to the state and involving an investigator if there wasn’t progress with the USDA food commodities.

Reniers stated she was not worried about an investigation because FoodLink has done nothing wrong.

The board president indicated a desire to continue working with RCRC, but expressed some concern over the tactics RCRC has been using.

“Part of our value base is trust and collaboration. Having protesters come to our distributions and writing news articles potentially not telling the whole truth – that to us isn’t a values alignment.”

Regardless, FoodLink stated it should and would continue to have a dialogue with RCRC.

6 thoughts on “FoodLink struggling to feed county during pandemic”