Editors’ note: This article has been updated to include a new court document. 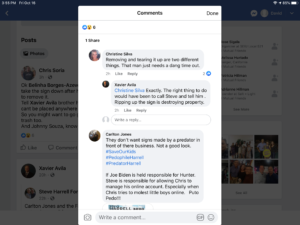 Jones’ behavior was reported by his opponent for the District 3 seat, Steve Harrell, in an October 15 social media post. Harrell reported Jones–who has been at the center of several controversies during his tenure on the council, including removal from his position as the city’s first Black mayor–took the sign from a convenience store at Paige Avenue near Highway 99, tore it into pieces and discarded it.

When another post regarding the matter appeared on a social media platform hosted by Harrell’s campaign manager, Xavier Avila, Jones was quick to admit his actions and defend them. Jones claimed the property owner asked him to remove Harrell’s sign, which had been placed near a sign for Jones’ campaign.

Jones said the request was a result of Harrell’s son, Chris Harrell, participating in his father’s campaign to unseat Jones. The younger Harrell was arrested earlier in October during a sting targeting individuals soliciting sex with children via the internet.

“They don’t want signs made by a predator in front of there (sic) business,” Jones said. “Not a good look.”

The Sins of the Son

In early October, Chris Harrell and 12 other men were arrested by the Tulare County Sheriff’s Office (TCSO) as the culmination of a months-long operation intended to entice would-be pedophiles using decoy online profiles. According to the TCSO, the men agreed to exchange money and gifts for sex, and were arrested when they arrived at what they believed to be the home of one of several decoy profiles representing male and female children ages 14-17.

Because the younger Harrell was managing his father’s social media presence, Jones claimed his father should be held liable for the son’s alleged crime. He referenced presidential candidate Vice President Joe Biden and his son Hunter, who has been accused of influence peddling by Biden’s political rivals.

Jones’ accusations then took a dark turn, as he called Chris Harrell a “puto pedo.” The Spanish word is a pejorative term for a male homosexual prostitute and is considered homophobic and profane.

In response to Jones’ statements, Harrell said he had the property owner’s permission to place his sign at the store. He also implied the person Chris Harrell agreed to meet was not a minor.

“As far as the last statement, a 19-year-old is not a little boy,” Steve Harrell wrote.

A pair of charges filed against Chris Harrell, however, both accuse him of attempting to interact with minors.

The felony complaint filed by the Tulare County District Attorney on October 16, in the Tulare County Superior Court, accuses the younger Harrell of meeting a minor for lewd purposes and contact with a minor with the intent of committing a sexual offense, and describe him as “motivated by an unnatural and abnormal sexual interest in children.”

In a Statement of Probable Cause filed by the Tulare County District Attorney’s office, Deputy Don DeAzevedo states that he created an account on the Grindr app for a fictitious 17-year-old male.

“A subject later identified as Christopher Harrell reached out to the decoy, knew he was underage and still agreed to meet for sexual acts,” DeAzevedo’s statement reads.

An arraignment in the case is scheduled for December 7, 2020, at the Tulare County Superior Court.

As the back-and-forth between District 3 candidates continued, Harrell made reference to Jones’ arrest for alleged domestic violence while defending his son’s right to due process.

“Your comments leave out the word ‘alleged.’ When you (Jones) were arrested, you were alleged to have committed domestic violence and child endangerment,” Harrell wrote. “My focus is the city council, not engaging in mindless banter with you and the people that have chosen to follow you.”

Jones, who has had repeated run-ins with members of the Tulare Police Department (TPD), claims his arrest was the result of a corrupt officer. He also accused Harrell, who served with the TPD for more than two decades, of similar behavior.

“I was arrested because a lying cop like you made a false report,” Jones wrote. “I was always innocent, and those involved with those false accusation (sic) had to pay. I won in criminal and civil court.”

The race between Jones and Harrell, however, will not be settled online. The vote to decide that contest, as well as the District 1 and District 5 races, will be held on Tuesday, November 3.