A Press Release from the Hanford Carnegie Museum 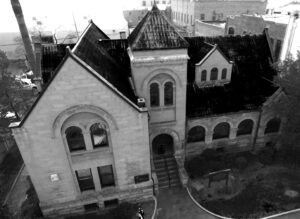 Hanford Carnegie Museum is another causality of the pandemic. On September 28 at 5pm the Hanford Carnegie Museum turned over the keys to the beloved building that had been the home to many historical and cherished antiquities donated to the nonprofit entity. All items that were on loan were picked up or delivered.

The building was built by Andrew Carnegie to be a public library. Mr. Carnegie, an immigrant to the United States, desired to use his acquired wealth to give back to his adopted land. He loved books and building libraries became his mission. He funded a total of 2,509 Carnegie libraries between 1883 and 1929. Hanford Carnegie Library was built in 1905. In 1968 it closed as a library. In 1974 it opened as a museum for the purpose to share the rich history of Hanford. In 1975 the nonprofit officially began.

The nonprofit’s main responsibility is to safeguard historical articles which are donated or on loan. Housing of the articles was at the building under a city owned lease. This lease was paid up to 2031. However, stipulations of the lease to do all maintenance on the building and premises has been an arduous job for board members. Acquiring funding is an issue with a majority of nonprofits in the country. Data from National Center on Charitable Statistics reveals that approximately 30% of nonprofits fail to exist after 10 years. Hanford Carnegie Museum nonprofit has been existing for 45 years.

To keep a 115-year-old building maintained cost thousands of dollars. Prior boards had resisted using large funds for a city owned building, but recent years the building has shown more decay. For the last three years over a quarter of a million dollars has been used to keep the building from caving in, and other maintenance to satisfy the lease. For example, over $124,000 dollars towards the roof took a big chunk of financial resources. As well, inflation continues and picking and choosing what must be fixed and what must be neglected until funds are acquired has been the M.O. As well, the increasing homeless population would remove lawn mowers and landscaping tools and use the courtyard gardens as bathroom facilities.

Another lease stipulation is current insurance. It was reported recently by a prior board member that insurance for the building back in her day was $1000 a year. She was appalled to know that it had risen to $8000 a year. Three fundraisers were planned to gain the funds for that 2020 insurance bill, but the pandemic forced closure for public gatherings at the museum.

There has been prior grief for the museum. In August 2019, the city issued an eviction notice threat if 12 rehab requirements weren’t completed in ten days. Nearly 200 heroic community members offered their sweat equity in the hot August sun to complete the list with others offering donations to feed volunteers and donate services. The overwhelming list from the city required the museum to acquire the services from Dias Law Firm to argue; (1) the impossibility of a specialized mason to assess the cracks and repair within ten days, (2) the impossibility of Teter Architects and Engineers to evaluate the structure of the building, booked out for months, to assess the building within ten days, (3) the replacement of sod which the sod company refused to deliver in the august heat, and (4) extradition of the feral cats from the premises which is a known city-wide problem. As well, the list from the city required rust to be removed from the iron fence around the perimeter of the museum, which the heroic volunteers sanded off by hand and hand painted. As well, all dirt around the museum had to be leveled at a required grade. The news media took great interest in this community endeavor to save the museum from eviction and enjoyed reporting the success of avoiding the eviction threat before the end of the ten-day deadline.

The Hanford Carnegie Museum felt public awareness and renewed support was gained from the eviction threat in 2019. Though museum funds were depleting to pay for materials for this extraordinary rehab of the building, the board was confident funds could be built back in 2020. Then the pandemic forced the museum to close for public safety. Six months later the city evicted citing lack of proof of insurance renewal. Simply, the nonprofit just could not pay the $8000 annual insurance bill that was due. The Hanford Carnegie Museum board asked the city council for financial help, but it was declined.

The board has observed a growing homeless population lingering at the museum location. Leaving the valuable articles unattended would be contra the board’s own mission statement and commitment to safeguard the articles. Then on September 20 an angel approached a board member to offer storage space to the museum articles after learning the plight of the nonprofit. This was the perfect solution for the current circumstances. The irony, this assistance came from an immigrant like Andrew Carnegie.

The Hanford Carnegie Museum board desires to rise again when a new location is found. Donations of funds are tax-deductible and the board welcomes well-wisher comments.

One thought on “Hanford Carnegie Museum Closes its Doors”