The Visalia Unified School District (VUSD) board held a special meeting Tuesday night centering around equity, inclusivity and combating racism in the district.

The agenda held only two items: the first, a report on inclusivity in the district, showed board members the efforts that district staff have made — and have yet to make — in facing multiple issues identified by Visalia Unified students and staff, and action items and goals identified through the process.

The second, a “Resolution to Uplift Student Voice and Denounce Harassment and Racism,” was presented for a first read by the board. The resolution states it specifically came in response to incidents that occurred at protests along El Diamante High School’s fence facing Akers St. 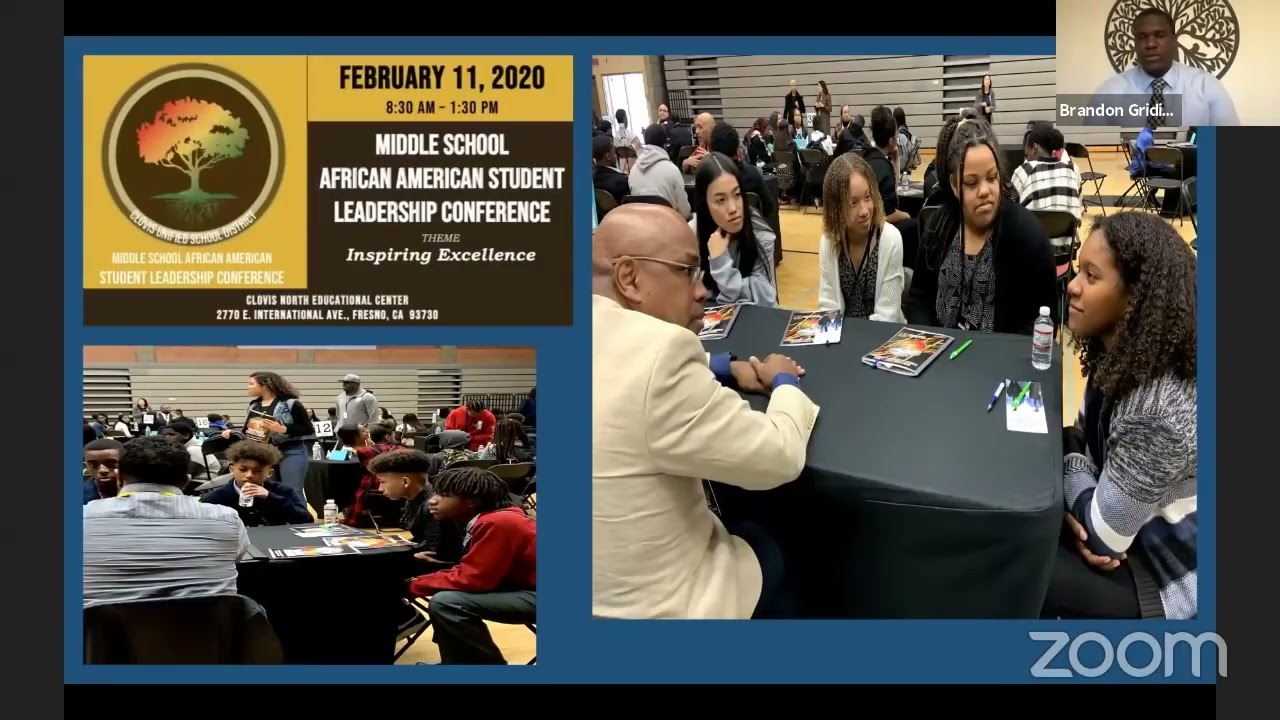 Students and community members have posted pro-Black Lives Matter signs and held protests at the fence for weeks.

Brandon Gridiron, the district’s Administrator for Equity and Student Services, spent part of his time discussing the recent events and actions he took to reach out to student protesters, going so far as to visit the El Diamante fence daily, he said.

“Over the last four or five weeks, Mr. Waters and I had been going out to the protests that had been at El Diamante, really to engage with our students, really to understand what they were working on, what it was all about, and to help support them along the way, and understanding exactly what they were doing,” Gridiron said.

He stated that he removed signs with obscenities, vulgarities and threatening violence — those signs were still in his car, and he stated students also took down signs of their own accord.

Although the protests started as student-led demonstrations, eventually, he said, the protest eventually got “moved into, or taken over, by adults, who were starting to have these conversations with our kids.”

After multiple incidents at the fence — including one widely publicized physical altercation — took place, the district was forced into action to remove the signs to protect its students, he said; a student forum was announced at the same time the district stated it would take down the signs.

Fifteen individuals — four former students and eleven current students — took place in the forum, though a number declined, and one even made a point to say that they were fearful of retribution if they took part in the forum.

Five recommendations came out of the session:

Gridiron provided a quick background summary to the board, including statistics from a Hanover Research survey showing students reported being treated differently based on physical appearance, race/ethnicity/skin color, income, gender identity, sexual orientation, and sex. Gridiron also reminded the board of the ACLU’s discrimination complaint against the district, filed in 2018, regarding racism in the district. The ACLU had previously sued the district in 2002, alleging anti-gay bias in the district’s schools.

The ACLU’s 2018 complaint and the Hanover Research study spurred the district into action, Gridiron said, forming three taskforces: one focused on students, one on district staff, and one on the community.

“These taskforces were really called to look at policy, look at practices, and really develop strategies for creating welcoming, inclusive cultures within our district,” Gridiron said.

Recommendations from the taskforces included:

Progress had been made on each point, Gridiron said.

“We created our own database and our own platform in PowerSchool to allow teachers to have this [incident] data readily available for them so they can see incidents as they occur and document them themselves, but also see the incidents that were reported, and how they were addressed,” Gridiron said. Dashboards were created with the data to see trends and patterns,” he added.

Dashboards with this data would be made available to students and parents as well, he said.

Legal training had been provided to administrators, Gridiron said, to ensure that investigations into school incidents can happen “more efficiently, effectively and equitably.” In addition, each school has held civility training — centering around bullying, harassment, discrimination and hate speech — for its students uniquely developed and administered by each school, he said.

To encourage multicultural activities at the district’s campuses, middle school and high school students attended African American Student Excellence Conferences, and a Black Student Union club will start this fall at El Diamante, Gridiron said. Leadership classes will be implemented, as well, to “create a positive school climate and culture.”

A Black Student Union club already exists at Golden West, and Gridiron stated that the district will work with Mt. Whitney High School and other schools in the district to implement those clubs in the future.

According to Gridiron, the district’s goals to make a more equitable environment, included:

Board members praised the report and Gridiron’s efforts.

Niessen Foster stated he was “very pleased with the report,” adding that he was grateful that the issue of implicit bias would be explored, and that ethnic studies classes should be added at the high school level.

“I’m very pleased that this district is taking a lead in this subject, especially eliminating confederate flags, which are a very poor symbol of this country — the cruelty, the torture, the rape, that is a very poor symbol, and I love our American flag,” he said.

Lucia Vazquez said she was impressed with Gridiron’s work with students.

Gridiron presented the “Resolution to Uplift Student Voice and Denounce Harassment and Racism” to the board for a first read.

“WHEREAS, recent student-initiated and student-led expressions at El Diamante High School have brought to the forefront of local conversation experiences with bias, harassment, racism, and social injustice,

WHEREAS, several adults in the community have responded to the student expressions at El Diamante High School with threats, violence, and intimidating actions,

WHEREAS, as an institution of learning, the District must educate students on working together to listen, learn from, and comprehend the experiences of others, address bias, and stop all forms of harassment, racism, and injustice,” the resolution begins.

If approved, the resolution would state that the board stood “strongly with all students, staff, families, and community members to reaffirm the rights of and ensure the safety and well-being of all students on all District sites and campuses,” “expects each and every adult in our District to be a steward of our students’ success,” and would approve a pilot program at El Diamante High School to “uplift student voice.”

The resolution would also direct district and school site leaders to begin organizing forums for students to share their views on matters in the community and in schools, direct staff to “listen and engage in action to develop learning opportunities for students about effective and developmentally appropriate implicit bias training,” and would require a quarterly report to the board on “equity, inclusivity, access and social justice” throughout the district.

Vazquez stated she would like to see a directive for transparent, accountable protocols to be established around student reports of violence, assault, or other incidents on campuses, echoing requests made by students at the meeting.

“This is beautiful, you’ve done a great job with this, but I would really like to see the fact that besides all this other stuff that we’re doing, that we are going to establish protocols that allow for transparency and for that accountability to make sure that things get done, please,” Vazquez said.

Board Member Walta Gamoian said that she didn’t believe the process wasn’t transparent, but that it seems there wasn’t follow-through.

“Board policy’s there, we just have to make sure we follow through. I think that’s the issue, because if board policy’s there, we need to make sure that’s happening, and that’s the accountability piece,” Gamoian said. “And I think Mr. Gridiron made that very clear in the presentation — that there has to be accountability. So, maybe we need to state — we can state in the resolution, here is board policy for reporting, or protocols for reporting…”

Vazquez replied that she was channeling the concerns of students.

“All I’m asking is that, yes, it’s that accountability piece, because what I heard today, and what I read from the Dear VUSD, and what I read from the students’ emails that come in, is that stuff happens on campus and they go to the admin and then they feel that nothing has happened,” Vazquez said. “Which tells me that the transparency, whatever systems we have in place — they do not feel that they’ve been heard or they’ve been addressed, and that’s why they’re asking: it should be logged in, it should be addressed, and there should be some kind of accountability system over it.”

“I think what is being addressed right now is the accountability to make sure that is happening,” he said.

The student incident dashboards he previously discussed would help provide accountability to the process, Gridiron added, and help keep staff accountable, too.

At one point, after student comments, Board Member Juan Guerrero said that mandated reporter training should be given to all staff members. Tamra Ravalin, the VUSD Superintendent, said district staff were given that training twice a year.

William Fulmer, also a board member, stated that he “could remember a specific incident where a teacher said ‘my principal told me not to bother to report that,’ and I said, that could cost you your credential — you let the CPS people decide if there’s a problem.”

Vazquez reiterated that she simply wanted to see accountability placed in writing, in the resolution — and that she believed the group was in agreement. Ravalin told the board she would work to get Vazquez’s points about accountability “wordsmithed in.”

A caller, identified only as Chris, said she was a district employee, and applauded Vazquez’ efforts to fit accountability and protocol into the resolution.

“Those who we tell these policies to, [need] to be held accountable if they do not follow through. So many times, we can talk to them ‘til we’re blue in the face, but there is no one at district holding them accountable for what they do not report. And that seems to be the problem,” she said. “And when these students are asking for a way to report, in a way that they know it will be taken down in an electronic student, is great for that — because, guess what, if they report it electronically, no one can then go alter it and remove it.”