Third update: Visalia Chief of Police Jason Salazar has released a statement in video form addressing the incident involving a counterprotester striking two demonstrators with his vehicle. Police are in contact with all parties involved and details of the interaction are included below.

Second update: The Visalia Police Department have issued a statement regarding the incident involving a counterprotestor striking two demonstrators with his vehicle and fleeing the scene. The two protesters were not seriously injured. Protesters are now demonstrating on Main Street in downtown Visalia. Details below.

Update: A late model, blue Jeep driven by anti-protesters struck two women who stepped into traffic on Mooney Boulevard to confront them. After protesters responded to negative comments made by the Jeep’s trio of passengers by throwing water bottles at the vehicle, the vehicle’s driver accelerated, striking two women before fleeing the scene. Visalia Police and the California Highway Patrol are investigating. Additional details regarding the collision have been added to the story below.

Visalians took to the streets Saturday afternoon to protest the death of George Floyd at the hands of police in Minneapolis, Minnesota on May 25.

The impromptu protest–word of which was spread via social media–began at noon at the intersection of Mooney Boulevard and Caldwell Avenue. As of 4 p.m., it continued strongly. By 7:30 p.m., it appeared protesters either moved to Main Street in the city’s downtown or a second protest began there as evening approached.

Floyd, a 47-year-old resident of Minneapolis, was killed by police in that city while they attempted to arrest him for allegedly passing a counterfeit $20 bill. Video of the arrest shows three officers kneeling on Floyd as he lay in the street and protested he could not breathe. The four officers involved in Floyd’s arrest have been terminated, and the officer many deem responsible for Floyd’s death has been charged with third-degree murder and manslaughter.

Protests, many violent, have spread across the United States in response.

In Visalia, an ethnically diverse crowd of hundreds of people joined the action, most of them young. No single group claimed responsibility for organizing the event, and those taking part say they plan to continue into the evening.

While many of the protesters maintained a base in the parking lot of the shuttered Sequoia Mall, more walked a picket line, circling the intersection. The vast majority of passing motorists who reacted to the protesters were supportive. There were some exceptions.

The protest, while mainly peaceful, saw some minor confrontations. At one point, the crowd, when confronted by angry passersby, brought east-bound traffic on Caldwell Avenue to a stop for several minutes and while they surrounded vehicles. Many of the protesters shouted for the more militant among them to remain peaceful. There was no violence, though some in the crowd threw water bottles at the apparently offending vehicle as it left the area.

A group of Trump supporters who attempted to disrupt the protest from their passing vehicle–a late-model, blue Jeep–were quickly chased away, but not before they struck two protesters, knocking one of them to the ground. The women had stepped into traffic on southbound Mooney Boulevard to confront the occupants of the vehicle. 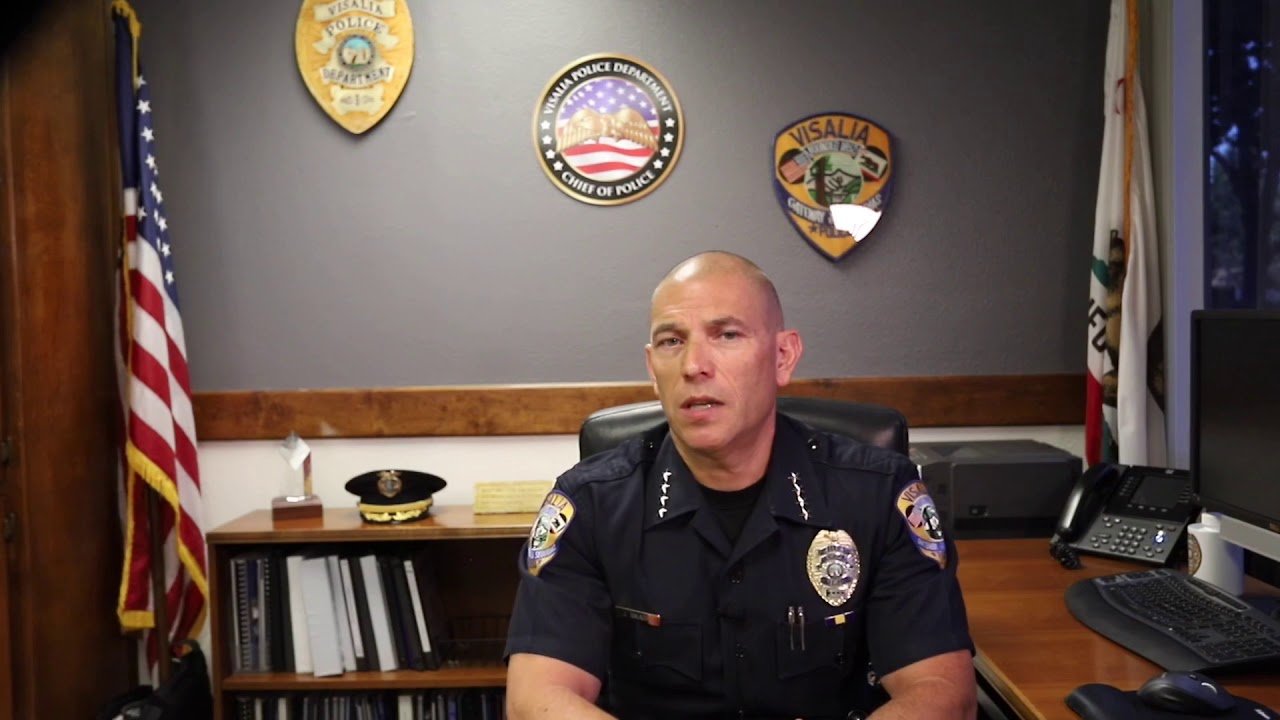 Rumors the driver is the son of a Visalia Police Department officer and was being protected by police also surfaced online. The VPD issued a statement denying the rumor. Both women, the VPD said, sustained minor injuries. Their traffic division is investigating the incident.

SOMEONE PLEASE TELL ME YOU GOT THEIR LICENSE PLATE

SOMEONE GOT RAN OVER BY TRUMP SUPPORTERS pic.twitter.com/4guMdPFSMw

Protester Scott Allen witnessed the collision. According to Allen, the Jeep–which was flying the American flag along with a flag supporting Donald Trump’s presidential campaign–was noticed by those in the crowd as it approached the site of the protest, drawing ire.

“I heard people start to say, ‘Boo!’ At that point it was down by RaboBank (about 100 yards from the site of the protest),” he said.

“From the moment they pulled up they were making fun of people, pointing at them and making cry baby faces,” said Allen, who witnessed the incident from about 20 feet away.

Protesters, Allen said, initially ignored the Jeep and its passengers; however, when the southbound traffic light changed and a few straggling protesters remained in the crosswalk, the driver of the Jeep began revving his engine in what Allen described as a threatening manner.

“Of the hundreds of people who were there, those two chicks went over and yelled at them,” Allen said of the two protesters struck by the Jeep as it fled. “The girls were practically against the grill. They (the driver of the Jeep) punched it and took off.”

Allen said the recordings do not tell the entire story.

“What bothers me is the video doesn’t show them sitting there for three minutes making fun of people,” he said. “There was definitely a lot of confrontation before those girls left the crosswalk.”

On Sunday, Visalia Chief of Police Jason Salazar released an additional statement on the Jeep striking the protesters in the form of a 6-minute video. According to Salazar, the driver contacted police after the incident took place.

“The driver of the vehicle then immediately called the police department and drove to the Visalia Police Department to report the incident to officers,” he said.

The two women he struck also contacted the VPD, and Salazar described their injuries as “minor bruises and abrasions that did not require medical attention.”

No arrests have been made.

“Based on the initial statements from the involved parties and the video that was reviewed by officers, arrests have not been made at this time,” he said.

The VPD has yet to conclude its investigation, Salazar said, and will forward its findings for possible prosecution.

Salazar also confirmed one of the vehicle’s occupants was a distant relation of a VPD officer.

“These individuals are not immediate family members of a Visalia police officer, but there is an extended family relationship with one of the individuals to a Visalia officer,” he said. “However, that officer is not investigating the incident, and that relationship has had no bearing on this case or our department’s response to this incident.”

The police chief revealed VPD officers “monitored” Saturday’s protest to ensure safety of participants and observers, and said officers will continue to do so as demonstrations continue.

“We are committed to ensuring that our citizens have the right to peacefully protest, yet we must also protect the safety of all members of our community,” he said.

Salazar also offered his opinion on the Jeep striking protesters and the protesters entering the roadway, taking both parties to task.

“This incident should not have occurred,” he said. “The driver of the vehicle acted irresponsibly, and protestors should not enter the roadways to impede vehicles or throw items at vehicles as part of a peaceful protest.”

He also offered the understanding of his officers to those protesting.

“We share the emotions of anger, frustration and sadness that many are feeling related to the recent death of George Floyd,” he said. “The actions and inactions of the officers involved in that incident are incomprehensible and disturbing.”