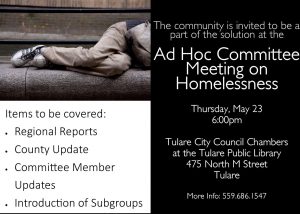 The biggest chunk of funding will come from the state with a potential $250 million up for grabs for the local bi-county area of Tulare and Kings Counties. However, thanks to current regulations set by Sacramento, it’s not guaranteed that Tulare County will receive it’s fair share of funding.

As it stands, “The Big 13” (larger cities like Los Angeles, San Diego, Sacramento) will get a slice of funding simply for being large metropolitan areas. Other smaller cities and rural areas will only get half of the funding available, and will be forced to compete amongst each other for the rest of the grant by meeting “performance measures” on the homeless issue.

This creates instability for organizations like C-Set, which relies on grants to stay running.

“The problem is,” Smith continued. “That program only lasts for a year. That’s all the grant funding is for and then it goes away. Then we have to apply again, and we may not get it. So they lose it. They let go of all the staff. And the program goes away.”

“Every year it’s like we’re scratching a lotto ticket.”

The Kings-Tulare Homeless Alliance, along with other organizations committed to fighting homelessness, sent a letter to the Governor to stop this unfair treatment of our bi-county area.

After hearing this, Tulare Mayor Jose Sigala proposed that his city join the coalition standing up against these unfair regulations. The motion passed and the council will vote on it in the coming city council meeting on June 4th.

Mario Flores, ad hoc homeless committee member, believes Tulare may have a pathway to having its voice heard in the capitol. As it turns out, the Senior Advisor on Housing is Tia Boatman Patterson. If you’re unfamiliar with that name, Patterson was once a resident and graduate of Tulare.

“So one of the most senior point persons for the Governor’s office for the state of California is right here from Tulare,” Flores said. “I think that opens a lot doors for communication, funding, and housing dynamics.”

That being said, Smith encouraged the public to also speak its piece.

“Pick up the phone,” Smith said. “Talk to your assembly member Devon Mathis, talk to your senator Shannon Grove…That’s a free thing we can do for the whole community.”

While there’s a lot riding on what leadership decides in the capitol, that doesn’t mean money hasn’t been flowing locally to alleviate homelessness.

Smith announced that the Homeless Alliance has awarded $3.8 million to projects in the bi-county area attempting to combat homelessness.

“There’s a new project called the Bridge Housing Project, located in the city of Visalia, but there is a carve out for Tulare city residents.”

The program is designed for homeless who have been assessed for housing and have been matched with permanent housing opportunities. Another project that got funded is called Tulare Home, which is designed to keep people housed after transitioning off the streets.

Sigala announced that the city council has managed to allocate $14,000 and another $25,000 will be available by July.

Margie Perez announced that a grant was received from the state to create five beds for “bridge housing,” to help homeless transition from the street to permanent housing by November.

She also mentioned a low-income apartment complex in development across the street from Mission Oaks High School. The complex will have 65 units. Perez said that the apartments would not be section 8, but will potentially help low income and homeless as well.

There was also a mention of a mental health office potentially opening up in Tulare.

When the floor opened up to public comments many of the speakers expressed their concern about rumors of a “homeless village” potentially popping up in their neighborhood or near their businesses.

City council member Terry Sayre emphasized that the committee was still in the process of developing a plan and no action has been taken in regard to the homeless issue yet.

“We have not made any decisions. We are in the process of research and development,” she said.

Other members of the public warned Sigala about following in the footsteps of larger cities and using “old ideas” that have failed to curb homelessness.

“I think that’s a good suggestion,” Sigala said. “If there’s ideas that haven’t worked, then we need to be thinking outside the box…But at the same time, there may be some good things that are working and we need to look at that.”