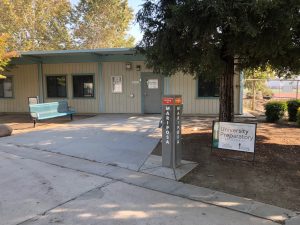 Gieszinger, 52, was arrested after a video surfaced of her cutting a student’s hair without their consent during a chemistry class at the high school. In the video, she appears to lunge at another student to cut their hair before the students run out of the classroom.

“Early in the investigation, Margaret Gieszinger, an instructor at UPHS, was arrested at her home on December 5th without incident and was booked at the Tulare County Sheriff’s Adult Pre-Trial Facility on one count of child endangerment with bail set at $100,000,” stated a press release from College of the Sequoias, where the high school conducts its classes.

The COS Police Department were early responders to the incident on Wednesday. “We responded to a complaint,” said COS Police Chief Kevin Mizner, “and supported by the video and statements, we believe a crime, or crimes, including child endangerment occurred.”

Mizner also said that after UPHS administrators sent Gieszinger home, he began the initial investigation of the scene which included numerous interviews and the collection of video evidence. The investigation is complete and the results will be submitted to the District Attorney.

According to the California Commission on Teacher Credentialing, Gieszinger’s credential had been suspended for six days in December 2007 and for 12 days in May 2016 under California Education Code 44421.

The CAEDC Section 44421 states the commission can suspend a credential for “immoral or unprofessional conduct, or for persistent defiance of, and refusal to obey, the laws regulating the duties of persons serving in the public school system, or for any cause that would have warranted the denial of an application for a credential or the renewal thereof, or for evident unfitness for service.”

Some students expressed concern over Gieszinger’s suspensions. “It’s a little concerning that she’s able to work with children this soon after getting her credential suspended,” said Megan Lacy, a junior at UPHS. “She’s always kind of weirded me out and everyone is freaked out about it.”

One of the complaints Lacy had was about her hair and Gieszinger’s interest in it. “She touched my hair at the Veteran’s Day assembly and that was the third time she had talked about it,” said Lacy.

“She talked with students about their hair a lot,” said junior Angello Betancourt. “There were some warning signs for sure.”

On Monday, she lashed out at students over tests that were supposedly stolen, said Justin Riggins. “She said that we were responsible for the tests she lost even though we turned them in the week before… She seemed very agitated and angry during the whole class,” said Riggins.

Though students were shaken, they did not express animosity toward the school.

“The school did everything they could the best they could,” said Emily Kendrick, who was in the class when Gieszinger cut the student’s hair.

“I’m not angry at the school. I’m angry at the people who hired her,” said Lilli Gates, a witness to the event.

Eyewitnesses reported seeing Lead Teacher Helen Milliorn-Feller and Principal Eric Thiessen enter the classroom while the students were directed towards the conference room at the back of the office.

In an email on Wednesday, Principal Thiessen assured that action was taken to guarantee the safety of the students. “Please be assured that the teacher is no longer on campus nor will be returning.  I am currently working with the Tulare County office of Education Human Resources Director and the Assistant Superintendent of Instruction regarding the matter,” said Thiessen.

UPHS is also offering counseling for all students free of charge. Classes are expected to run on schedule until the end of the semester.

“Considering she’s currently in jail, I feel safe, ” said Emmanuel Sami, a senior in Gieszinger’s class, “but I didn’t feel safe at all when I didn’t know where she was.”