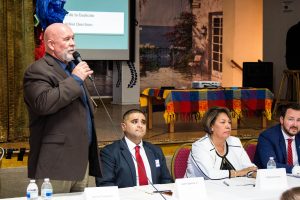 Immigration, agriculture, food, poverty, and the environment were key topics at a candidates’ forum in Porterville on Thursday night. Candidates for the Tulare County Board of Supervisors’ fifth district and State Assembly District 26 participated in the event.

It was apparent that the candidates found much common ground on the issues of education and their budgeting preferences.  With respect to education, all three candidates expressed the need to continue to foster the development and implementation of apprenticeship and career focused technical education programs.

Townsend stated that as an advisory board member for the Porterville Unified School District, he has seen first hand the benefits of placing local students into apprenticeship programs and asserted that it is a “great way to bring students into their careers.”

Gurrola echoed his sentiments by stating that she is “very supportive of CTE programs,” and, during her 37-year career at Porterville College, has seen these programs benefit local students “who just wanted a career, not to go on to a four-year university.”

In agreement, Figueroa, the first in his family to graduate high school and college stated, “Not everyone is going to go on to college, that is a reality.”  He reiterated the county’s need to provide those students with the opportunity to pursue a pathway to employment.

The candidates also discussed the county’s budget.  Both Townsend and Gurrola asserted that public safety and education should be prioritized; however, they agreed that water should be considered the number one priority for budgeting purposes.

Gurrola recounted her experience on the Porterville City Council during the recent drought which had an extreme impact on the city, “I went to the state legislature and said, ‘You go without water for one-day, like the people in East Porterville.’  We can’t do anything without water.”

The candidates’ policy preferences began to diverge, however; on their support of California’s sanctuary state policy and as to whether or not local law enforcement should cooperate with federal immigration agents.

Figueroa argued that local law enforcement should not be involved in federal immigration issues stating, “Federal agents have their own money, they can come in and take care of their own job.”

Gurrola also expressed some support for the policy and communicated safety concerns to the audience when she stated that, “Regardless if you are undocumented, or a citizen, we want people to be able to report crimes to law enforcement without fear…It’s important that individuals feel safe.”

In stark contrast, Townsend argued that, although he is a supporter of state’s rights, immigration is, and should be, a federal issue as, “we’re talking about U.S. borders, not state borders.”  He asserted that it is inappropriate “for a state to say, ‘I don’t want to abide by this particular federal law.’”  He continued by stating, “We don’t want to hinder our law enforcement when they have people who do cause problems, we want there to be cooperation between local and federal officials.”

Townsend did, however; indicate his desire to see some immigration reform that would reduce the amount of time it takes to become an American citizen.

In their closing statements, the candidates enumerated the several reasons as to why they would be the best choice to serve on the board of supervisors.  Figueroa, an immigrant to the United States and University of California, Berkley, graduate, expressed his desire to represent everyone in the district in a non-partisan manner.

Gurrola asserted that having served on the Porterville City Council for 12 years, and participating in various other committees in that capacity, has given her the tools necessary to excel as a county supervisor.

Townsend stated that, as an architect, he has experience in finding solutions to large problems with very little money.  Townsend believes he can apply that philosophy to the county board of supervisors.

For the State Assembly candidates, the most contentious moments came near the end of the forum when a question was posed from the audience with respect to issues impacting women.

In what might be considered a jab in the direction of the incumbent’s recent legal issues, and the fallout from the ongoing “Me Too” movement in Sacramento, the Democratic candidate, Jose Sigala stated, “First and foremost…we need to respect women.”

Gubler, also commented on the lack of respect for women in our state’s capitol and promised that, if elected, he would introduce legislation providing that legislators, “found guilty of this type of harassment would pay any settlement out of their own pocket instead of taxpayer dollars.”

Gubler faced some criticism from Republican rival Jack Lavers during their closing statements when Gubler stated that in Visalia, “We have the safest metropolitan area in the San Joaquin Valley.”  Lavers argued that he was unable to find evidence that Visalia is the safest city in the Valley and asked that, if this were true, “Why would you need to hire 30 more cops?”

Lavers asserted that 30 police officers is equivalent to 10% of the entire Kern County Sheriff’s Department and that the safest city in the Valley wouldn’t require such a large influx of sworn peace officers.

Gubler brought documentation backing his statement with him to the forum, however.

It stated, “The Federal Bureau of Investigation (FBI) released its annual compilation of crimes reported to its Uniform Crime Reporting (UCR) program by law enforcement agencies from around the nation.  Table 6 of the FBI report lists Metropolitan Statistical Area’s crime rates per 100,000 population. Visalia-Porterville MSA rate was 395.8 for 2015, the lowest in Central California.”

Gubler also added that Visalia has a plan to hire 30 additional police officers over the next 10 years as Visalia continues to grow and only if needed.