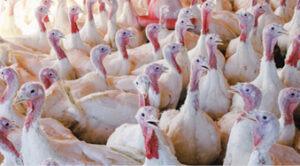 For turkey farmers, trying to anticipate what Americans’ dinner table will look like this Thanksgiving remains a head-scratcher.

After COVID-19 scaled back holiday gatherings last year, farmers who raise the centerpiece of the meal had to take a gamble on how many and what type of bird cooks would want this season.

“There’s so many twists and turns,” she said. “We just thought trying to project and predict the next step and the next buying patterns wasn’t really going to be realistic.”

Using numbers from 2020, Diestel said she corrected for panic buying, but maintained “a consistent number of birds and sizes,” and then “let the chips fall because it’s been so tumultuous over the last 18 months.”

Last year’s challenge was having to pivot quickly to serve more retail customers when sales to restaurants evaporated amid closures. This year, she said, uncertainties of the pandemic remain. Add to that “layered repercussions of COVID,” including a tight workforce, supply-chain issues and difficulty obtaining feed.

Bill Mattos, president of the California Poultry Federation, said he thinks families will hold more traditional holiday gatherings this year, but they may not necessarily serve bigger birds, which had been trending down even before the pandemic. The most popular Thanksgiving turkey these days typically weighs 14 to 18 pounds, he said. Larger birds go to make lunch meat, ground turkey and other products.

Diestel warned that shoppers who wait to buy frozen turkeys at grocery stores the week of Thanksgiving may not find the size they want, unless they’re looking for a bigger bird. That’s because national companies this summer did not have enough labor to process turkeys ordered in smaller weight classes, and those turkeys grew larger.

“If you’re really particular about the size of turkey that you want, you should probably get that situated sooner rather than later,” Diestel said.

Due to inflation, fresh turkeys—which represent most of the state’s production—will cost more this year, Mattos said, citing higher production costs, including for labor, fuel, feed and other materials.

California turkey farmers typically supply only about 40% of the state market, Mattos noted, and “every year we sell almost all the product.” State turkey production has declined in recent years as companies shift to more chickens, which are more profitable, he said.

California ranks No. 8 in U.S. turkey production, with 8 million birds in 2020, according to the U.S. Department of Agriculture. That’s down from 8.5 million in 2019. U.S. production reached 224 million head in 2020, dropping 2% from 2019. Top producing states ahead of California are Minnesota, North Carolina, Arkansas, Indiana, Missouri, Virginia and Iowa.

The state is producing more organic, free-range and antibiotic-free turkeys, Mattos said, “because those are always popular in California.” Most California turkeys are now antibiotic-free, he noted, a trend that started taking hold about 10 years ago and became more standard about five years ago.

“They won’t even have to advertise it after a while because most companies are going to no antibiotics ever,” Mattos said. Other states also are going that direction, he added.

With the cost of organic feed “significantly higher” this year, Diestel said the farm reduced its production of organic turkeys because “they’re so expensive to grow.”

Sacramento County farmer Ken Mitchell, who grows turkeys for Livingston-based Foster Farms, said he experienced his worst production year ever, with bird losses on all three blocks of his farm. Because the birds are for the company’s “no antibiotics ever” program, he said there was not much he could do to treat infections such as mycoplasma other than to liquidate the houses to control transmission.

“Instead of cleaning up once a year, I cleaned out three times in a row here, and that takes manpower and labor and everything to clean out, wash down,” he said. “(The houses) sat empty with no bird on the farm for three months.”

Mitchell said the antibiotic-free program began with just some hens, but now all hens are in the program because it’s more efficient to consolidate the birds’ diets. The program has become more standard in the business because that’s what retail and food-service customers want, he noted.

He said the state produces fewer turkeys now because the dynamics of the business have changed. There were “a couple of good years,” but with competition from other meats and plant-based options, plus higher feed prices, the last 12 to 13 years have been a struggle, he added.

Tom Fry, a poultry producer in Madera County who grows for Fresno County-based Pitman Farms, said turkey production in California has been waning because “it’s almost easier to grow them out of state,” closer to where feed crops are produced.

“It’s very expensive to try to bring in that much food for turkeys,” he said.

A longtime turkey farmer, Fry has switched to growing chickens for Pitman because of rising demand for that product. As a contract grower, he’s paid only for when he has birds, and with turkeys, he was getting just one flock a year from the company. Another incentive for raising chickens, he said, is he can use their manure as fertilizer on his tree crops.

This season, however, he did convert one of his houses back to turkey production to grow for Pitman’s organic turkey line. The 8-week-old birds arrived in mid-September and left his farm last week at about 14 to 15 pounds. They will be marketed as Thanksgiving turkeys.

(Ching Lee is an assistant editor of Ag Alert. She may be contacted at [email protected].)